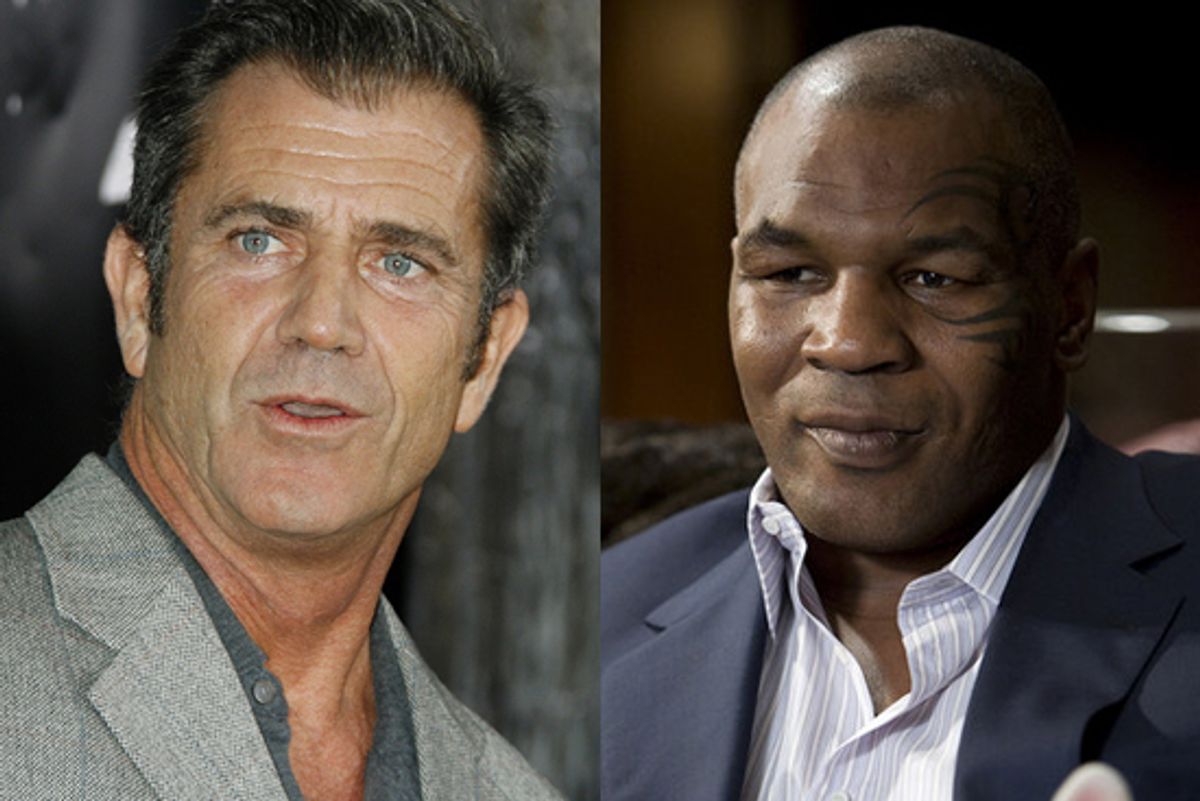 The sun stopped in the sky Wednesday, the oceans rolled back, and an extraterrestrial starship the size of Australia hovered over the North Pole, transforming arctic wastelands into verdant pastures.

And in other miracle-related news, some people in Hollywood decided to stand on principle.

The issue was Mel Gibson, charismatic movie star, Oscar-winning filmmaker and drunken, bigoted, death-threat-issuing lout. Gibson was supposed to make a cameo in "The Hangover 2," the sequel to the 2009 hit "The Hangover," but was booted from the production, reportedly after cast members -- supposedly led by costar Zach Galifianakis -- told the film's director, Todd Phillips, that they were uncomfortable working with Gibson. The cast apparently was not uncomfortable appearing in the last "Hangover" opposite convicted rapist and onetime mugger Mike Tyson, who subsequently told ESPN radio that he did the cameo "for drug money."

Granted, Tyson is a notorious deadpan wit, and that drug money remark might have been a joke. But he's still a convicted rapist, and Galifianakis and company had no problem acting with him a couple of years ago. There's something about this "Hangover 2" thing that doesn't pass the smell test. It seems, at the very least, yet another example of the selective outrage that fuels controversy-driven entertainment coverage, and Hollywood posturing generally, with actors, directors, producers, studio bosses and other players working themselves into a righteous snit about certain people and offenses while giving others a pass.

If artists should be publicly censured and denied employment on the basis of offenses they commit in private life, how come Gibson is a pariah right now for threatening and hitting his ex-girlfriend Oksana Grigorieva, while Alec Baldwin, who verbally abused his 11-year-old daughter on the phone, lashed out at a photographer, and has a long record of frightening behavior toward his ex-wife Kim Basinger, is currently one of the most beloved figures on network TV?

And while we're keeping score, how is it that Roman Polanski -- in theory a pariah after fleeing the United States to avoid prosecution on charges of drugging and raping a barely adolescent girl -- got a 2003 Oscar as Best Director (in absentia) and a standing ovation, while a 1999 honorary Oscar for director Elia Kazan was preceded by months of protest over Kazan being a rat for the House Un-American Activities Committee? One wonders, how many of the actors that made a big show of sitting on their hands when Kazan got his award applauded loudly for Polanski four years later? And does anyone doubt that if Polanski offered Galifianakis the lead role in his next film that the actor wouldn't happily accept? Or that if Tyson invited Galifianakis to his birthday party, that he'd show up with a bottle of Jagermeister, then re-enact the infamous punch-out from "The Hangover" while guests snapped pictures with their cell phones and posted them on Twitter?

Why is Lindsay Lohan, substance abuser and intoxicated driver, borderline-unemployable right now, but Kate Moss, a one-time cokehead blasted as a toxic role model for young women, still a sought-after model, appearing in a Valisere lingerie campaign and on the cover of Bryan Ferry's new album "Olympia"? And how is it that Charlie Sheen, who was accused of strangling his wife Brooke Mueller and holding a knife to her throat on Christmas Day, 2009, is still the star of the CBS sitcom "Two and a Half Men," and recently signed a new contract guaranteeing him two more years of employment? And if indeed a star's repugnant private life should affect the public's perception of him, why is Sheen's sitcom beating "Dancing with the Stars" in the ratings?

A bit of voice-over from the Vietnam epic "Apocalypse Now" applies here: "Charging a man with murder in this place is like giving out speeding tickets at the Indy 500."

It might be an absolutist position, but I'll go ahead and state it here: I don't care how horrendously a person behaves behind closed doors. Knowing what swine they are informs but does not veto my appreciation of their work, if in fact I appreciate that work to begin with, and even if I don't, the gossip, arrest reports and tortured personal history add flavor to what I know, or think I know, about what such people do and represent. But the private melodrama never becomes the whole story for me -- partly because of that whole, pesky "Judge not lest ye be judged" thing, but also because when we feast on these headlines, we're treating selective knowledge as the whole story. We have no idea whether Tyson, Gibson, Baldwin, Lohan, Moss or anyone else are truly among the worst-behaved creative types in the entertainment industry, or just the ones that happened to get caught.

I'm reminded here of a revealing comment from Tom Hanks. During an interview about 10 years ago, I joked that it seemed strange that Hanks was treated as a model of moral rectitude, when for all we knew he could have a collection of severed heads in his basement. Hanks fixed me with a chilling psycho stare and hissed, "Who told you?" Then he laughed and said, "I'm kidding. But yeah, it is weird. Why am I Mr. Nice Guy? Because that's who people say I am. That's my image. Nobody really knows what people are like behind closed doors."

Americans are the most irritating of hypocrites: binary-minded, easily distracted scolds. We have trouble holding opposing thoughts in our heads at the same time, and we stay furious only until the next outrage pops up in the media cycle. We have staunch positions on what constitutes right and proper behavior, but only for certain people -- the people whose behavior we happen to consider beyond the pale, for whatever subjective reason -- and we reserve the right to give a pass to whoever we like, whenever we please, and to come up with pretzel-logic rationalizations justifying our inconsistency. And we've got no problem taking a nuanced view of morally challenged artists as long as they're not raising hell in the present day. That's why some journalists in the early '90s could warn that the soon-to-be-late rapper Tupac Shakur was setting a poor example for America's youth by keeping company with drug dealers and gun-toting fools, then pen rhapsodic appreciations of Frank Sinatra, who kept company with mobsters and used his influence with them to secure union votes for John F. Kennedy.

This ongoing spectacle of the entertainment industry censuring certain artists over their private misdeeds while ignoring or rehabilitating equally troublesome characters is pathetic. Violence, substance abuse, self-destruction and general prickishness is a blight on humanity, but it's a blight that should be dealt with by police and judges, not the media or the public. Either the criminal justice system is working properly or it isn't. And whether it is or isn't, the offenses or alleged offenses have nothing to do with an artist's work, or right to work, much less our ability to engage with and appreciate said work.

Instead of either/or, how about both/and? Baldwin is a hot-tempered, maudlin, navel-gazing bozo, and one of the great character actors and improvisational comics alive. Mel Gibson is an anti-Semite, a sexist, a homophobe, and very possibly a deranged religious fanatic; he's also one of the few bona fide movie stars of the last three decades and the most brilliant action filmmaker since Sam Peckinpah. Polanski is a great director and a sex offender. Kazan was a great director and a rat. Lohan and Moss are substance abusers and arresting beauties whose most interesting work probably lies ahead of them. Sheen is a master of droll self-parody and an unexpectedly charming sitcom star, and a wife-abusing scum that should be behind bars right now. If I cared enough to hypothesize an ideal future for Sheen, I'd picture him serving several years in prison for assaulting his wife, preferably in maximum security with the hardest of hardcore felons, then moving over to HBO, playing himself.

And while we're on the subject, Joan Crawford was a child abusing harpy and a great screen star. William S. Burroughs shot his wife in the head and wrote some of the most important fiction of the mid-20th century. Norman Mailer stabbed his wife with a pen knife, behaved like a bullying doofus every chance he got, and compiled a body of work, fiction and nonfiction, that makes most contemporary writing seem weak and safe.

What about any of this is hard to understand?