The real danger from NPR's firing of Juan Williams

Above all else, the mythology of Muslim as Scary Menace must be preserved 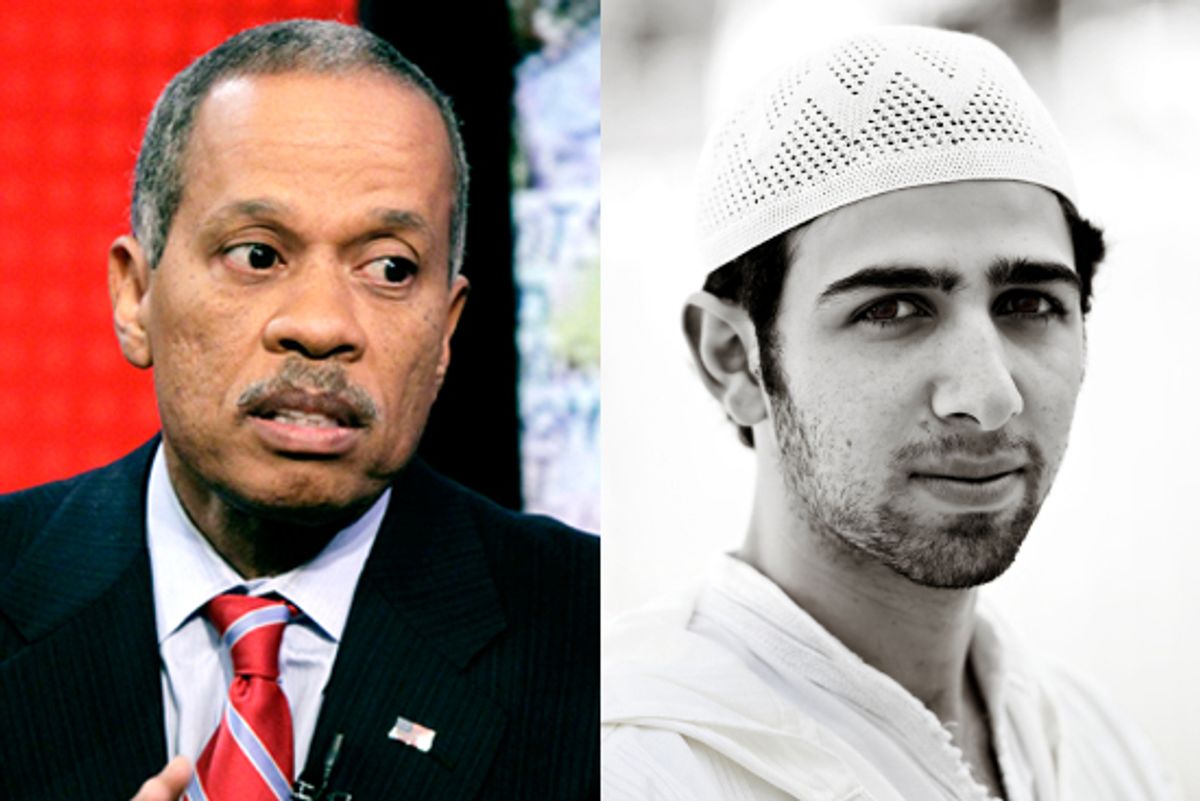 I'm still not quite over the most disgusting part of the Juan Williams spectacle yesterday:  watching the very same people (on the Right and in the media) who remained silent about or vocally cheered on the viewpoint-based firings of Octavia Nasr, Helen Thomas, Rick Sanchez, Eason Jordan, Peter Arnett, Phil Donahue, Ashleigh Banfield, Bill Maher, Ward Churchill, Chas Freeman, Van Jones and so many others, spend all day yesterday wrapping themselves in the flag of "free expression!!!" and screeching about the perils and evils of firing journalists for expressing certain viewpoints.  Even for someone who expects huge doses of principle-free hypocrisy -- as I do -- that behavior is really something to behold. And anyone doubting that there is a double standard when it comes to anti-Muslim speech should just compare the wailing backlash from most quarters over Williams' firing to the muted acquiescence or widespread approval of those other firings.

But there's one point from all of this I really want to highlight. The principal reason the Williams firing resonated so much and provoked so much fury is that it threatens the preservation of one of the most important American mythologies:  that Muslims are a Serious Threat to America and Americans.  That fact is illustrated by a Washington Post Op-Ed today from Reuel Marc Gerecht, who is as standard and pure a neocon as exists:  an Israel-centric, Iran-threatening, Weekly Standard and TNR writer,  former CIA Middle East analyst, former American Enterprise Institute and current Defense of Democracies "scholar," torture advocate, etc. etc. Gerecht hails Williams as a courageous "dissident" for expressing this "truth":

[W]hile his manner may have been clumsy, Williams was right to suggest that there is a troubling nexus between the modern Islamic identity and the embrace of terrorism as a holy act.

Above all else, this fear-generating "nexus" is what must be protected at all costs. This is the "troubling" connection -- between Muslims and terrorism -- that Williams lent his "liberal," NPR-sanctioned voice to legitimizing.  And it is this fear-sustaining, anti-Muslim slander that NPR's firing of Williams threatened to delegitimize.  That is why NPR's firing of Williams must be attacked with such force: because if it were allowed to stand, it would be an important step toward stigmatizing anti-Muslim animus in the same way that other forms of bigotry are now off-limits, and that, above all else, is what cannot happen, because anti-Muslim animus is too important to too many factions to allow it to be delegitimized.  The Huffington Post's Jason Linkins explained the real significance of NPR's actions, the real reason it had to be attacked:

Yesterday, NPR cashiered correspondent Juan Williams for doing something that had hitherto never been considered an offense in media circles: defaming Muslims. Up until now, you could lose your job for saying intemperate things about Jews and about Christians and about Matt Drudge. You could even lose a job for failing to defame Muslims. But we seem to be in undiscovered country at the moment.

There are too many interests served by anti-Muslim fear-mongering to allow that to change. To start with, as a general proposition, it's vital that the American citizenry always be frightened of some external (and relatedly internal) threat.  Nothing is easier, or more common, or more valuable, than inducing people to believe that one discrete minority group is filled with unique Evil, poses some serious menace to their Safety, and must be stopped at all costs.  The more foreign-seeming that group is, the easier it is to sustain the propaganda campaign of fear.  Sufficiently bombarded with this messaging, even well-intentioned people will dutifully walk around insisting that the selected group is a Dangerous Menace.

"The Muslims" are currently the premier, featured threat which serves that purpose, following in the footsteps of the American-Japanese, the Communists, the Welfare-Stealing Racial Minorities, the Gays, and the Illegal Immigrants.  Many of those same groups still serve this purpose, but their scariness loses its luster after decades of exploitation and periodically must be replaced by new ones.  Muslims serve that role, and to ensure that continues, it is vital that anti-Muslim sentiments of the type Williams legitimized be shielded, protected and venerated -- not punished or stigmatized.

Beyond the general need to ensure that Americans always fear an external Enemy, there are multiple functions which this specific Muslim-based fear-mongering fulfills.  The national security state -- both its public and private arms -- needs the "Muslims as Threat" mythology to sustain its massive budget and policies of Endless War.  The surveillance state -- both its public and private arms -- needs that myth to justify its limitless growth.  Christians who crave religious conflict; evangelicals who await the Rapture; and Jews who were taught from birth to view the political world with Israel at the center, that the U.S. must therefore stay invested in the Middle East, and that "the Arabs" are the Enemy, all benefit from this ongoing demonization.

Beyond that, nationalists and militarists of various stripes who need American war for their identity, purpose and vicarious feelings of strength and courage cling to this mythology as desperately as anyone.  Republicans gain substantial political advantage from scaring white and Christian voters to shake with fear and rage over the imminent imposition of sharia law in America.  And political officials in the executive branch are empowered by this anti-Muslim fear campaign to operate in total secrecy and without any checks or accountability as they bomb, drone, occupy, imprison, abduct and assassinate at will.  Add that all together and there is simply no way that NPR could be permitted to render off-limits the bigoted depiction of Muslims which Juan Williams helped to maintain.

And then there's the more amorphous but arguably more significant self-justifying benefit that comes from condemning "Muslims" for their violent, extremist ways.  I'm always amazed when I receive e-mails from people telling me that I fail to understand how Islam is a uniquely violent, supremely expansionist culture that is intrinsically menacing.  The United States is a country with a massive military and nuclear stockpile, that invaded and has occupied two Muslim countries for almost a full decade, that regularly bombs and drones several others, that currently is threatening to attack one of the largest Muslim countries in the world, that imposed a sanctions regime that killed hundreds of thousands of Muslim children, that slaughters innocent people on a virtually daily basis, that has interfered in and controlled countries around the world since at least the middle of the last century, that has spent decades arming and protecting every Israeli war with its Muslim neighbors and enabling a four-decade-long brutal occupation, and that erected a worldwide regime of torture, abduction and lawless detention, much of which still endures.  Those are just facts.

But if we all agree to sit around and point over there -- hey, can you believe those primitive Muslims and how violent and extremist they are -- the reality of what we do in the world will fade blissfully away.  Even better, it will be transformed from violent aggression into justified self-defense, and then we'll not only free ourselves of guilt, but feel proud and noble because of it.  As is true with all cultures, there are obviously demented, psychopathic, violent extremists among Muslims.  And there's no shortage of such extremists in our own culture either. One would think we'd be more interested in the extremists among us, but by obsessively focusing on Them, we are able to blind ourselves to the pathologies that drive our own actions.  And that self-cleansing, self-justifying benefit -- which requires the preservation of the Muslim-as-Threat mythology -- is probably more valuable than all the specific, pragmatic benefits described above.  All this over a "menace" (Terrorism) that killed a grand total of 25 noncombatant Americans last year (McClatchy:  "undoubtedly more American citizens died overseas from traffic accidents or intestinal illnesses than from terrorism").

The double standard in our political discourse -- which tolerates and even encourages anti-Muslim bigotry while stigmatizing other forms -- has been as beneficial as it has been glaring.  NPR's firing of Juan Williams threatened to change that by rendering this bigotry as toxic and stigmatized as other types.  That could not be allowed, which is why the backlash against NPR was so rapid, intense and widespread.  I'm not referring here to those who object to viewpoint-based firings of journalists in general and who have applied that belief consistently: that's a perfectly reasonable view to hold (and one I share).  I'm referring to those who rail against NPR's actions by invoking free expression principles they plainly do not support and which they eagerly violate whenever the viewpoint in question is one they dislike.  For most NPR critics, the real danger from Williams' firing is not to free expression, but to the ongoing fear-mongering campaign of defamation and bigotry against Muslims (both foreign and domestic) that is so indispensable to so many agendas.

UPDATE:  In 1986, Juan Williams participated in a forum in The New Republic regarding a column by The Washington Post's Richard Cohen, who had justified the practice of D.C. jewelry store owners who would "admit customers only through a buzzer system, and [] some store owners use this system to exclude young black males on the grounds that these people are most likely to commit a robbery" (h/t).  Defending this race-based exclusion, Cohen argued that "young black males commit an inordinate amount of urban crime," and that "black potential victims as well as white ones often act on this awareness, and that under certain circumstances, the mere recognition of race as a factor . . . is not in itself racism."

Responding to Cohen's argument, Williams said:  "In this situation and all others, common sense in my constant guard.  Common sense becomes racism when skin color becomes a formula for figuring out who is a danger to me."