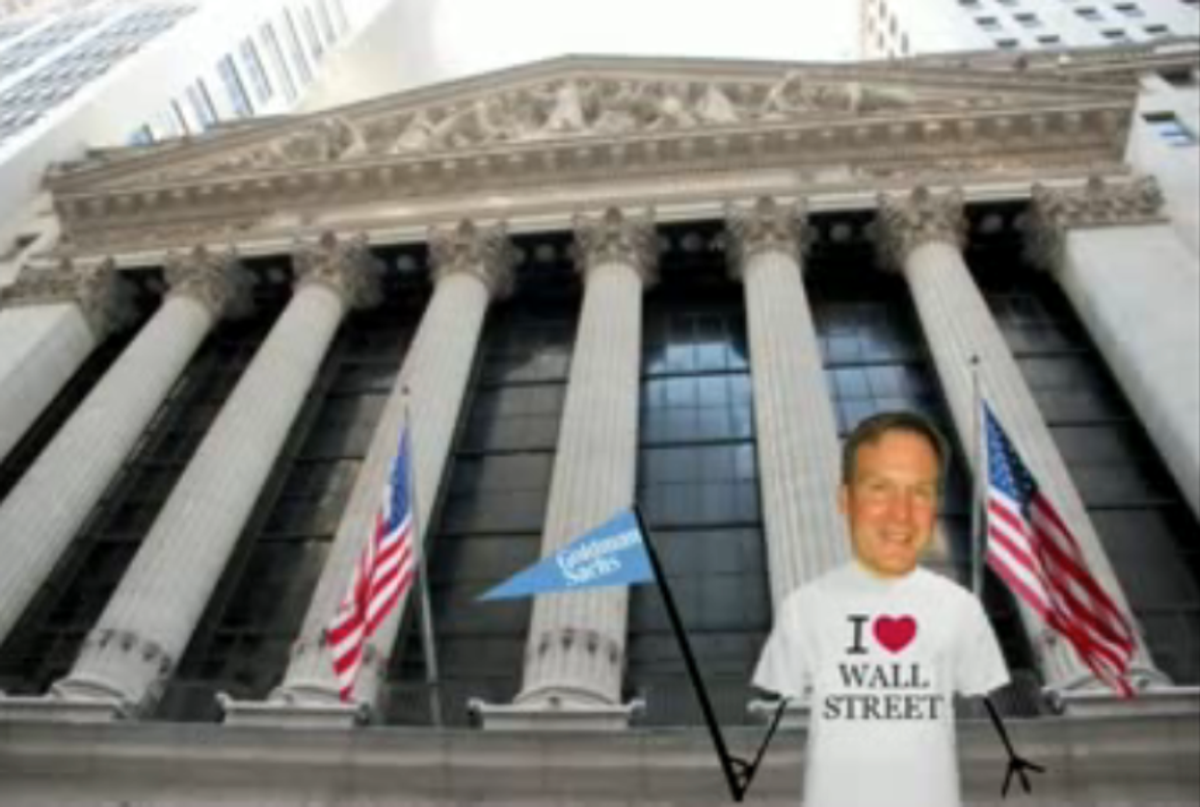 Here are three examples of political ads referenced in the story:

"Jim Marshall’s Not Looking Out for Main Street"

The Times is deeply offended by this advertising, whining in its faux-neutral way that over "200 candidates around the country have run ads demonizing the financial industry or Wall Street, often trying to tie an opponent to a culture of greed and government bailouts."

But that’s not all. The Times also quotes Glenn W. Richardson Jr., a political scientist, who says that all this negative stuff about NYC means that the city will "take a beating" due to the "narrative after the election."

Well, there’s a damn good reason that New York is target of all this populist outrage, which the Times story doesn’t even acknowledge. Wall Street was, in fact, the toxic source of the mortgage-backed securitization that almost brought down the economy. Wall Street did get bailed out. Wall Street has bounced back while millions of Americans remain in deep hurt. The average 2010 bonus for Goldman Sachs employees was $498,000.

Further, the relationship between candidates and New York’s dark centers of wealth, power and influence are relevant and legitimate subjects for political campaigns. But the Times suggests that even bringing up a candidate’s connections is a form of corrupt campaigning, writing in high-dudgeon that "Even setting foot in the city to do what countless politicians have done for years -- raise money -- prompts questions of hometown loyalty."

Let’s deconstruct the snide " … to do what politicians have done for years" comment. What the Times is actually saying is that the long-established practice of candidates raising money in exchange for unspoken political influence is suddenly the subject of political attacks, as if we should merely be polite and continue to look the other way. That’s hogwash.

It’s fine for the Times to report objectively on New York-bashing in the 2010 election cycle. But it violates basic journalistic practices for the paper to report this story with a fundamental bias against these attacks, which is just what it did. The story oozes with high-minded sanctimony and encoded snobbery, as if these issues don’t deserve to be even raised. While the Times might not like the coarseness of the discourse or the way in which facts can be wrested out of context and distorted through that migration, those messy manifestations of democracy can’t be a convenient excuse for resisting any linkage between Wall Street and current economic morass.

I am well aware that attacking New York is often a proxy for anti-Semitism, or gay-bashing or assaults on "East Coast intellectualism." But that’s not what’s happening now. These attacks are narrow and hard -- against Wall Street and a culture of greed and corruption that happens to be deeply upsetting and of great concern to many New Yorkers I know.

One New Yorker whom I don’t know, but who shares at least some of the outrage that’s animating these attacks, is the Wall Street legend Felix Rohatyn, who was just quoted in the very same paper as say:

No matter how much I try to be really objective, the financial community has not covered itself with glory in these last 50 years,” he said, betraying a sense of apprehension. “It’s a subject that is difficult for me to deal with because I’ve lived in the milieu for the last 50 years.

There’s not a single word in the Times which suggests that Wall Street did act with profound irresponsibility. Instead, the Times dances over that reality and prefers to hypothesize that political attacks on Wall Street might somehow leave lasting damage to New York City.