How to sear and saute mushrooms

A perfect flavor of fall -- unless they're watery and limp. How to make them golden brown and delicious every time 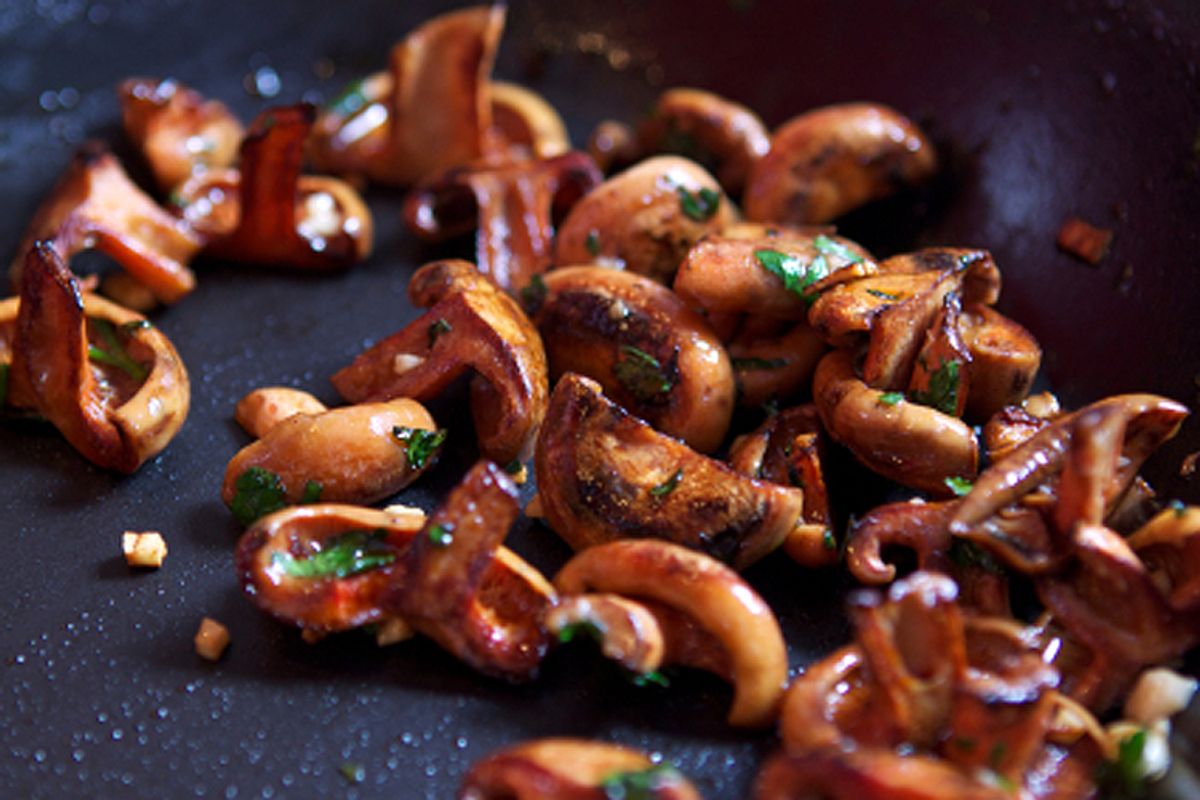 Look, no offense, but chances are your sautéed mushrooms aren't very good. But I'm on your side, and it's not your fault. It's just that mushrooms don't really want to be sautéed; they don't want to have a beautiful sear, browned color and a flavor -- almost like meat -- that lasts and lasts and lasts.

You see, mushrooms are delicate little things and they get easily stressed out. You know that guy who just starts sweating at the slightest provocation? Mushrooms are that guy, and when they hit a hot pan, the perspiration is unbelievable. They sweat, the sweat turns to steam, the steam gets the other mushrooms sweating, and next thing you know, your searing-hot pan is a fungi Jacuzzi, the mushrooms are getting boiled -- boiled! -- and boiling is pretty much the opposite of searing. Mmm, how about a nice boiled steak? It's a mushroom hater's nightmare -- studies show that 99.98 percent of all mushroom haters think they're slimy -- and even for mushroom lovers, there is a much better world out there.

The key to searing and sautéing mushrooms -- to getting that gorgeous color and a texture that's appealingly chewy, not squeaky -- is to know that water is the enemy of the sauté pan and to recognize that mushrooms are going to release lots of water. So how do you mitigate? Easy. Don't sweat the technique, homie.

Get the pan ripping hot, and don't be shy with the oil: Heat is what gives you browning, which is why can't brown food with water lying around -- once the pan starts to flood, all that water caps the cooking temperature to the boiling point, 212 F, far below the 310 at which browning happens. And using plenty of oil to transfer that heat will also help quickly evaporate any water the mushrooms do sweat out.

Don't crowd the pan: It might seem maddeningly inefficient, but cooking the mushrooms in one layer, with a little bit of room between them, will keep the pan dry. If the mushrooms are stacked on top of each other, the heat will cause the upper layers of mushrooms to cook and drip their water down, cooling the pan and again keeping you from getting that nice sear.

Let them cook! Look, I know the temptation is strong to shake the pan, to toss your food and look totally super cool. I love tossing food in the pan. But mushrooms, if you remember, are delicate little things, and if you start tossing them before they've fully seared, they'll just get all harried and start that whole sweating thing again. Put them in the pan and let them be.

Add aromatics or flavorings after the mushrooms are seared: This is simple – you're trying to keep your pan ripping hot, which means that minced garlic will burn up in that disco inferno in a second. If you want to use onions, it's best to cook them separately and then toss together with the finished mushrooms, or mince garlic or shallots and herbs finely and toss them in the pan with the mushrooms when they're nearly done.

Don't salt until the end: I am fanatical about seasoning with a little bit of salt and pepper at every stage of cooking. But in this case, salt also draws water out of mushrooms, so salt them when they're nearly done cooking, after the cells have collapsed and you've already sizzled away most of the liquid.

Oh, and a note on washing: So there's this old wives' tale that mushrooms will soak up water if you wash them. It's wrong. Period. So feel free to do so, but make sure to dry them with towels, or let them sit out in a well-ventilated area for a while. That said, I don't wash. I rub my mushrooms lightly with paper towels. I'm babying these things in the pan already, so I feel like I might as well baby them with some sweet, touching caresses beforehand, too.

While this technique works with all kinds of fungus, I find it best with the more common kinds you can find in supermarkets: white buttons, cremini, portobello, fresh shiitake. Chanterelles, lobster and other more exotic mushrooms work well this way, but their subtle flavors are sometimes even better served with other methods -- cooked more lightly, for instance, in an egregious quantity of butter. But whatever – they're too expensive for anyone to have enough to mound up a pan with anyway.