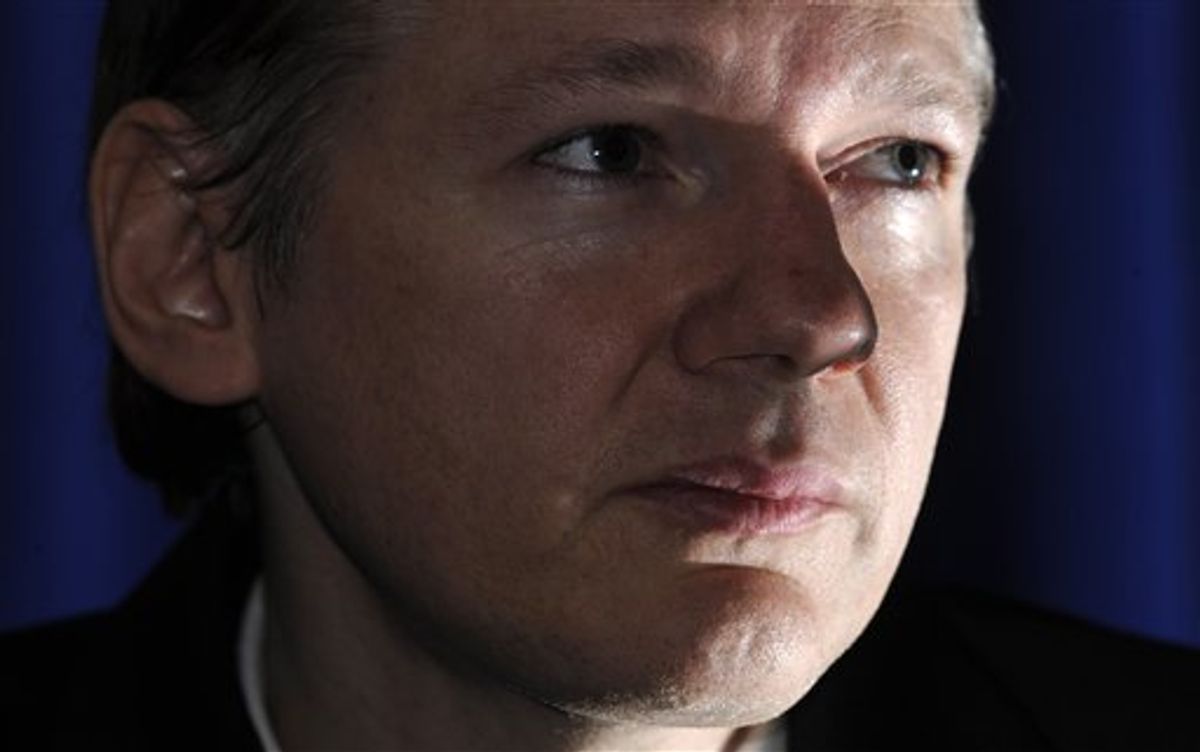 Founder of the WikiLeaks website, Julian Assange, speaks during a press conference in London, Saturday, Oct. 23, 2010. WikiLeaks revealed on Saturday previously secret files on the Iraq war, which in the biggest leak of secret information in U.S. history suggest that far more Iraqis died than previously acknowledged during the years of sectarian bloodletting and criminal violence unleashed by the 2003 U.S.-led invasion.(AP Photo/Lennart Preiss) (AP)
--

To supplement my post yesterday about The New York Times' government-subservient coverage of the WikiLeaked documents regarding the war that newspaper played such a vital role in enabling, consider -- beyond the NYT's sleazy, sideshow-smears against Julian Assange -- the vast disparity between how newspapers around the world and The New York Times reported on a key revelation from these documents:  namely, that the U.S. systematically and pursuant to official policy ignored widespread detainee abuse and torture by Iraqi police and military (up to and including murders).  In fact, American conduct goes beyond mere indifference into active complicity, as The Guardian today reports that "fresh evidence that US soldiers handed over detainees to a notorious Iraqi torture squad has emerged in army logs published by WikiLeaks."

Media outlets around the world prominently highlighted this revelation, but not The New York Times: 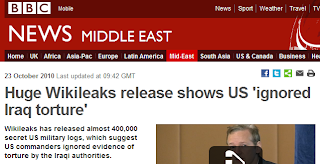 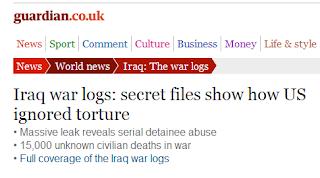 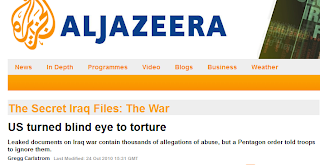 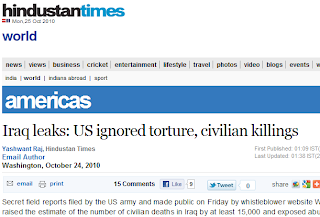 Even Politico acknowledged and trumpeted this fact:

By stark and deliberate contrast, here's how The New York Times framed these revelations to its readers (h/t Remi Brulin):

Three cheers for the U.S.!  While a handful of American soldiers -- a few bad apples -- may have abused Iraqi detainees in hellholes like Abu Ghraib, those detainees "fared worse in Iraqi hands," so we weren't as bad as the new Iraqi tyrants were.  That's the way The New York Times chose to frame these revelations.  And while that article mentions in passing that "most [abuse cases] noted in the archive seemed to have been ignored, with the equivalent of an institutional shrug," the vast bulk of the article focuses on Iraqi rather than American wrongdoing and even includes substantial efforts to exculpate the American role ("American soldiers, however, often intervened").

The difference in how (a) the NYT "reported on" -- i.e., whitewashed -- these horrific, incriminating revelations about the U.S. and (b) the rest of the world media reported on it, could not be more vast.  Again, even Politico understood its significance, as this was the first line of its article:  "Newly released Iraq war documents paint a devastating portrait of apparent U.S. indifference to a pattern of murder and torture by the Iraqi army, raising new questions about the Obama administration's plans to transfer the nation's security operations to Iraqi units."  But the NYT in its headline chose to venerate the superiority of American detainee treatment, while barely mentioning one of the most critical revelations from this leak.

Similarly, newspapers around the world heavily covered the fact that the U.N. chief investigator for torture called on the Obama administration to formally investigate this complicity in Iraqi abuse, pointing out that "if leaked US files on the Iraq conflict point to clear violations of the UN convention against torture, Barack Obama's administration has a clear obligation to investigate them," and that "under the conventions on human rights there is an obligation for states to criminalise every form of torture, whether directly or indirectly, and to investigate any allegations of abuse."   Today, Britain's Deputy Prime Minister called on the British Government to fulfill that obligation by formally investigating the role British troops might have played in "the allegations of killings, torture and abuse in Iraq."

But these calls for investigations -- and the U.N.'s explanation of the legal obligation to do so -- are virtually nonexistent in the American media.  The only mention in the NYT of the U.N.'s statement is buried deep down in a laundry list of short items on one of its blogs.  Along with most American media outlets, The Washington Post has no mention of this matter at all (while whitewashing American guilt, the NYT -- in the form of Judy Miller's former partner, Michael Gordon -- prominently trumpeted from the start of its coverage the "interference" in Iraq by Iran in aiding "Iraqi militias," a drum Gordon has been dutifully beating for years).

The notion that the Obama administration not only should -- but must -- investigate the role its military played in enabling this widespread, stomach-turning torture and abuse in Iraq is simply suppressed in American political discourse, most of all by the newspaper which played the leading role in enabling the attack on that country in the first place.  It's not hard to see why.  The last thing American political and media elites in general want is a discussion of the legal obligations to investigate torture and bring the torturers to legal account, and the last thing which enablers of the Iraq War specifically want is a focus on how we not only allowed but participated in the very human rights abuses which we claimed (and still claim) our invasion would stop.

UPDATE:  Note, too, how the NYT in its article on brutal detainee abuse steadfastly avoids using the word "torture" to describe what was done, consistent with its U.S.-Government-serving formal policy of refusing to use that word where U.S. policy is involved.  By stark contrast, virtually every other media account uses that term to describe the heinous abuse of detainees chronicled by this leak, the only term that accurately applies:  see The Guardian ("American military documents that detail torture, summary executions and war crimes"); BBC (US "ignored Iraq torture"); Politico ("a devastating portrait of apparent U.S. indifference to a pattern of murder and torture by the Iraqi army").  BoingBoing appropriately mocks the NYT's increasingly humiliating no-"torture" policy by creating a euphemism-generator.

UPDATE II:  The Daily Beast has an extraordinary article today by Ellen Knickmeyer, who was The Washington Post's Baghdad Chief during much of the war.  The headline of the article is "WikiLeaks Exposes Rumsfeld's Lies," and she writes:  "Thanks to Wikileaks, though, I now know the extent to which top American leaders lied, knowingly, to the American public, to American troops, and to the world, as the Iraq mission exploded."  She documents how WikiLeaked documents prove that Rumsfeld and other top military and political officials outright lied about the state of Iraq in 2006.

This is the type of language which the NYT and Washington Post would never, ever use; it's undoubtedly true that Knickmeyer could not have written this if she were still at the Post.  Our leading establishment news outlets use far more deference and respect and muted language when talking about High Government Officials.  They'll unleash a slew of insults about Julian Assange's mental health and alleged personality faults -- and viciously malign anyone who lacks power in their world -- but they would never dare use language like this when talking about a political or military official who wields power.  Knickmeyer had to leave the Post in order to speak the truth this way.

UPDATE III:  Michael Calderone of Yahoo! News documents how the Sunday news shows barely bothered to discuss the substance of the WikiLeaks documents at all.  Even worse, on ABC News, Diane Sawyer demands to know whether WikiLeaks -- but not the U.S. Government officials responsible for perpetrating and sanctioning torture in Iraq -- will be arrested.   To paraphrase that exchange:

Diane Sawyer:  Will WikiLeaks be arrested?

As I wrote yesterday:  "serving the Government's interests, siding with government and military officials, and attacking government critics is what they do. That's their role. That's what makes them the 'establishment media'."