The Rally to Restore Sanity: Why the secrecy?

Jon Stewart and his team have yet to reveal any real details about Saturday's big event. Is this a sign of trouble? 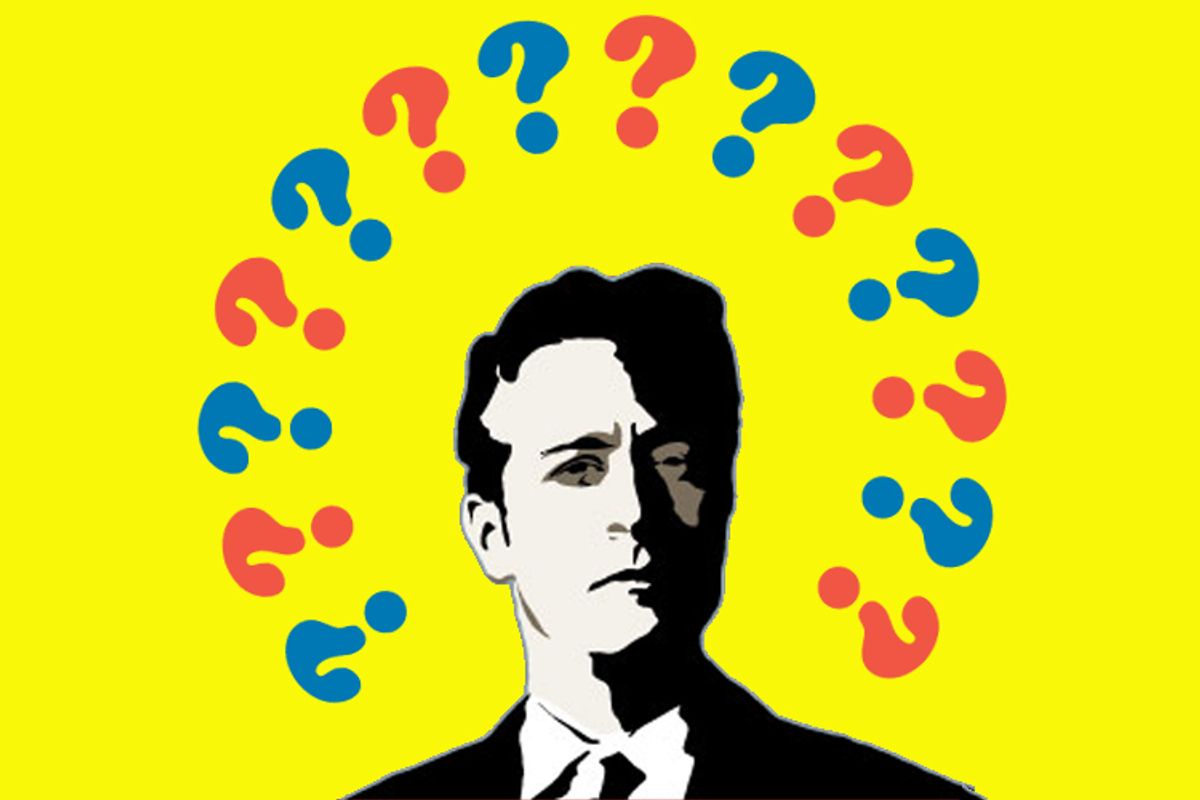 If there's one thing Americans excel at, it's packing up the outrage, hitting the road, and taking it to the doorsteps of what are generally referred to as those fat cats in Washington. We'll rally because we don't enjoy immigrants and paying taxes. We'll rally to get Glenn Beck to stop crying.

So when Jon Stewart announced a Rally to Restore Sanity, a gathering for those who "think shouting is annoying, counterproductive, and terrible for your throat; who feel that the loudest voices shouldn’t be the only ones that get heard; and who believe that the only time it’s appropriate to draw a Hitler mustache on someone is when that person is actually Hitler," a collective sigh of relief rose up from the portion of the populace capable of composing a reasonably coherent protest sign. Teamed with Stephen Colbert's March to Keep Fear Alive, the whole megillah sounded like a glorious idea. And in many ways, it is. Why should the bullies and the loudmouths and raving paranoid wackadoos always hog the limelight? Why should they get to descend upon our nation's capital – yes, nutburgers, it's our nation too – and bogart all the freeze-dried astronaut ice cream at the Air & Space Museum? But as the Saturday march approaches and enthusiasm continues to build, is it OK to ask – one, two, three, four, what are we fighting for?

The rally, an event propelled by the will of the Internet, fueled by the campaigning of netizens to make it so, promises to be tremendous – if only somebody would tell us what it's actually going to be. In the nearly six weeks since it was first announced, remarkably few details about the logistics and lineup have emerged. There is a time: noon. A place: the far eastern end of the National Mall. There are exactly two confirmed guests: Stewart and Colbert. Beyond that, your guess is as good as mine. Dudes, even Burning Man has an events lineup.

At this point, it's puzzling how little has been revealed. Is the Oprah-endorsed event going to be the greatest moment in the history of satire, a stunt "to show you how ridiculous Glenn Beck is," one big plug for Comedy Central? Will its organizers and attendees ultimately fall back on the old, get-out-of-social-responsibility-free line that it's just entertainment? Or could it be, dare we dream, the beginning of the end of all the freaking gasbag lunacy? Will it inspire a nation to get out and vote, to roll up its sleeves and work toward positive change?

Even the rally's designated causes don't offer much clue. Sanity restorers who attend or watch whatever the heck unfolds from the comfort of home can show support by donating directly to The Trust for the National Mall, DonorsChoose, and the Yellow Ribbon Fund. They can also put they money where their melons are with a commemorative knit hat, or any of the other souvenirs being sold to raise funds for the three charities.  I'm all for preserving the Mall and getting supplies for schools in need, but you certainly couldn't say the rally is being promoted as, say, a veterans aid awareness campaign. The altruistic aspect is conspicuously downplayed in favor of the more general, "We're here! We're sane! Get used to it!" theme.

Why are plans still being so tightly guarded? Is it because it's going to be so mind-blowing that to whisper a word of what will happen would ruin it? Because they're still winging it and don't yet have the details sussed out? I contacted the show's publicists Monday for specifics, and as of Tuesday morning had not heard back. But with mere days left before the event and anticipation high – "TDS" has relocated for this whole week to Washington and the president himself is Wednesday's guest -- there is another, considerably darker possible reason for all the secrecy.

A few weeks ago, I attended a taping of "The Daily Show," and was dismayed to find the security ramped up to just shy of a full cavity check. When I had been there a year earlier security was thorough too, but I didn't have a guard confiscate my copy of Entertainment Weekly and demand I take my coat off the empty seat next to me. (He wound up giving me back the magazine, right before saying, "If I see you take it out, I'm wrestling you to the ground.") When Stewart emerged to do his pre- and post-show chats with the audience, a stone-faced guard stood close by the whole time. Could it be that the prospect of restoring sanity scares the hell out of certain members of the extreme fringe – enough to turn them downright dangerous? Perhaps the organizers figure the true fans of rational thought can figure out a plan for the day on their own, but they don't want to give the more volatile element any extra help.

A few clues, however, are beginning to emerge. On Monday, "TDS" introduced us to six of the "tens of hundreds of millions of Americans" going to the rally on the show's Sanity Bus, including a Winston-Salem pizza maker who said he's tired of "the far left and the far right," a Georgia "conservative college student" and, notably, a New Jersey "pair of lifelong Democrats" who "don't like extremes." One message that's clear from a show that has delivered two years of brilliant barbs at the Obama White House: This is not a rally to restore the Democratic Party. But perhaps the philosophical imperative of the event was best summed up by the Muslim-American Sanity Bus rider who said, "I don't believe I am required every day to prove day and night that I am as good as anybody." Because whether you're Muslim or you're gay or you're red state or blue, it's time to stop being held accountable by the idiots. And that's the ongoing message of Comedy Central's powerhouse duo.

Despite the big event's baffling layers of enigma, "The Daily Show" and Colbert's fans have come to expect a high dose of moral integrity served up with those nightly spoonfuls of righteous, hilarious indignation. We know it feels more powerful, when assessing the often-dire state of the world, to laugh than to yell. Or to cry. If you want proof of the optimism of the American character, it's there in the hope that something true and good and substantial can come out of getting together on America's front lawn to watch two comedians, with barely a clue of what will anybody will do next. And maybe that's enough.