Tim Profitt admits to attacking a MoveOn activist at Monday's debate, insists it wasn't as bad as it looks 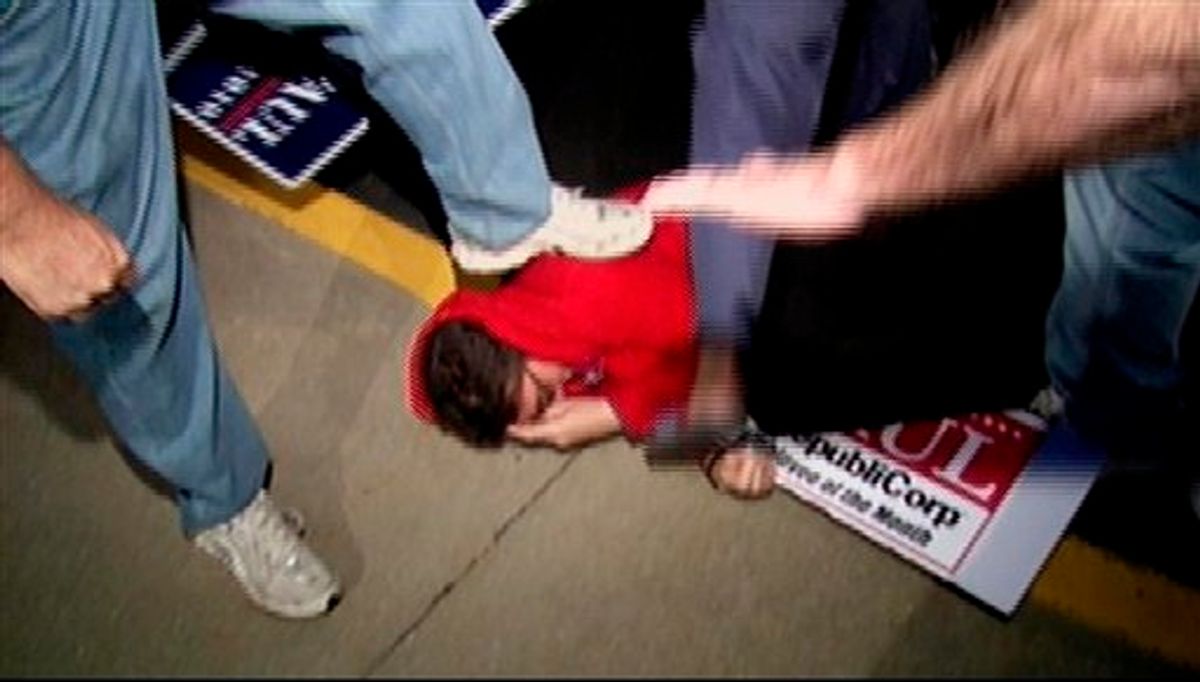 In this Monday, Oct. 25, 2010 image taken from video and released by WDRB/Louisville, Lauren Valle of liberal group MoveOn.org, seen in red, is held on the ground by supporters of Republican U.S. Senate candidate Rand Paul as she tries to confront the candidate, in Lexington Ky., after Paul and Democratic opponent Jack Conway debated. (AP Photo/WDRB/Louisville) MANDATORY CREDIT (AP)
--

Tim Profitt, the Rand Paul campaign's Bourbon County coordinator, admitted today to stomping on the head of activist Lauren Valle outside Monday's debate between Paul and Jack Conway. The Lexington Police have issued a criminal summons for the head-stomper.

The Lexington Division of Police has identified a suspect in connection to the October 25, 2010 assault of a woman at 600 Cooper Drive.

On the 25th, at approximately 7:00p.m., officers were alerted to an active assault at 600 Cooper Drive (Kentucky Educational Television Studios).

Officers responded to the scene of the assault and made contact with the victim. She identified herself as a member of MoveOn.org and stated she was assaulted while attempting to take a picture with candidate Rand Paul. Division of Police patrol officers took an assault report and forwarded the case to the Division of Police Bureau of Investigation.

Today, October 26, 2010, detectives identified the suspect, involved in the assault, as Tim Profitt. Mr. Profitt is currently being served with a criminal summons ordering him to appear before a Fayette County District Court Judge.

Profitt apologized -- sort of -- while claiming that his stomping on a woman's face only looked bad because of the camera angles.

As for the others involved in the assault? Bloggers -- including Tea Party members -- seem to have identified one of the men who held Valle down while Profitt stepped on her head. The guy is named Mike Pezzano and, yes, while he aided in the attack he was literally wearing a "Don't Tread on Me" pin.

Valle was diagnosed with mild sprains and a concussion, and said to reporters that her attackers threatened to "take someone out" before they wrestled her to the ground. She is scheduled to appear on MSNBC's "Countdown" tonight.

The Paul campaign fired Profitt and banned him from future events. And, of course, there is a picture of Paul with the head-stomper himself.