Can Charlie Sheen be saved?

The actor is hospitalized after another dramatic episode. Is he beyond rehabilitation? 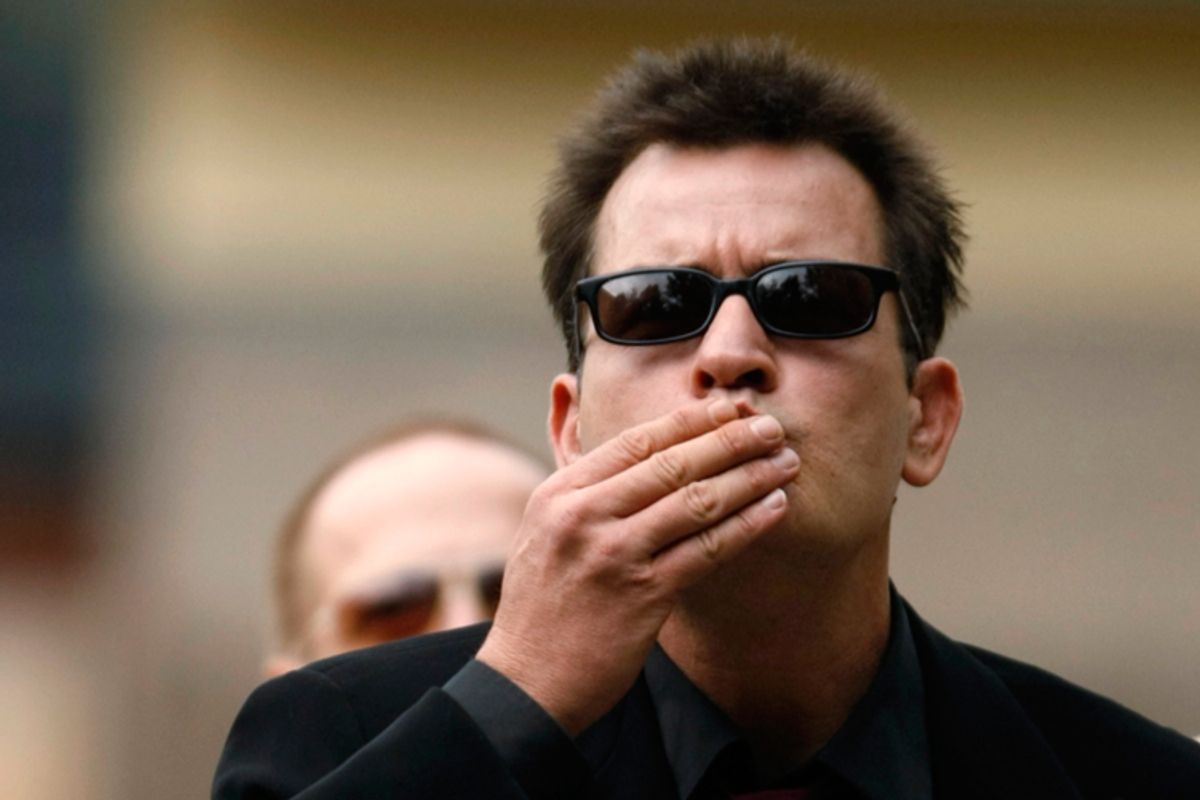 That Charlie Sheen still has a career at this point is vivid proof of the triumph of hope over experience. Today, the most highly paid actor on television continues to be the most employable screw-up in the world, heading to the set of a feature film where he's doing a small part, before returning to the enduringly mediocre "Two and a Half Men." Not a bad workweek for a man who this weekend disturbed the well-heeled guests of New York's Plaza Hotel with his room-trashing, "primal screaming and swearing," possibly-naked meltdown.

What The New York Post referred to as a "coke and hooker rampage" appears to have begun when Sheen accused his escort for the evening of taking his wallet and cell phone. He was carted off to the hospital for "for alcohol abuse and psychological evaluation" after reportedly telling police he'd been drinking and using cocaine earlier in the evening (though no drugs were found in his room). His agent Stan Rosenfield has already chalked up the incident to "an allergic reaction to some medication." And Sheen's ex-wife Denise Richards, who was staying across the hall and accompanied him to the hospital, told Joy Behar Tuesday, "As far as what happened and what went on, I'd rather leave that for Charlie to discuss if that's something he wants to do because that's something very personal and private."  Sheen himself, a man who's still on probation for his December 2009 domestic violence incident in Aspen and who seems coated in Teflon, has so far kept mum on the incident.

Few individuals share Sheen's spectacular list of arrests, rehabs, and legendarily bad behavior -- and equally formidable knack for not losing jobs or winning lengthy prison term for their parole violations in the process. As Aspen Deputy District Attorney Arnold Mordkin shrugged to E! this week "I have enough to do as it is."

But while Sheen is a dramatic example of second and third and umpteenth chances, the stubborn talent for messing up in spite of a wealth of resources and encouragement is an all-too-familiar story to anybody who's experienced or loved someone with alcoholism or addiction. And it begs the question – when do we, as friends, family, employers, or even television viewers – give up on a person?

Sheen, like plenty of individuals who've struggled with substance abuse, can appear at times a genial, charismatic guy. He has two brothers, one sister, a famous father, two ex-wives, one current spouse and five children. He has people who love him and colleagues who depend on him to not be wasted and destroying hotel rooms. And yet he keeps finding himself in variations of the same pickle, again and again.

What is it in some people's brains or wills that could make them repeatedly try to throw their lives away? Alcoholics Anonymous charitably, but with a dose of relieved superiority, refers to such individuals as "constitutionally incapable of being honest with themselves…. They are not at fault; they seem to have been born that way." Despite referring to alcoholism and addiction as a "disease," AA suggests the path to recovery awaits for those who can do a "searching fearless moral inventory," which makes it sound like those who do have a level of bravery that those who can't don't.

Nobody promises it's easy. In fact, if you've ever watched someone go through withdrawal, it sucks. Those who manage to hold it together, against what plenty of scientific evidence and family case studies indicate is a genetic vulnerability to addiction (frequently combined with a history of abuse, abandonment, or learned behavior) are to be commended and supported to the utmost. And frankly those of us who simply aren't predisposed that way are damn lucky.

But nearly all of us have been affected by the actions of substance abusers at one time or another. The relative who calls in the middle of the night asking for money. The lover who turns mean. The coworker whose messes we have to clean up. And the question that comes up again and again is – when do we cut them off? Are there some people who are just beyond redemption? And if they are, who gets to make that verdict, and what are we supposed to do with them then? Lock them up? Let them wander the streets? When is it safer to cut off ties and let someone destroy himself? Sheen's continued presence on television – and his heavy compensation – are ridiculous at this point. But should he be written off entirely yet? There are four children under the age of seven who call him Dad. As Denise Richards said Tuesday, "My daughters are five and six years old. And they're at an age when they can start to understand." It's one thing to cancel a sitcom; it's another to give up on your father.

If substance abuse is indeed as much a physical as an emotional condition, it helps to consider it on a spectrum. Plenty of other stars -- and friends -- have eventually come back from the abyss. If Russell Brand and Lou Reed can do it, why can't Sheen? There are those for whom getting clean seems relatively painless. There are those who struggle for years. And heartbreakingly, there are those who, it seems, can't. Maybe the reason we keep giving the latter so many chances isn't because they're such great people, or even because we depend on them so much. It's because even in the face of a seemingly fatal diagnosis, it's human nature to hope. Because in both the substance abuser and the ones who care about him, the echo of Churchill's directive to "Never, never, never, never give in" echoes in our hearts, overriding the pessimism in our brains and the evidence in our faces.