Does Obama support legal pot or not? 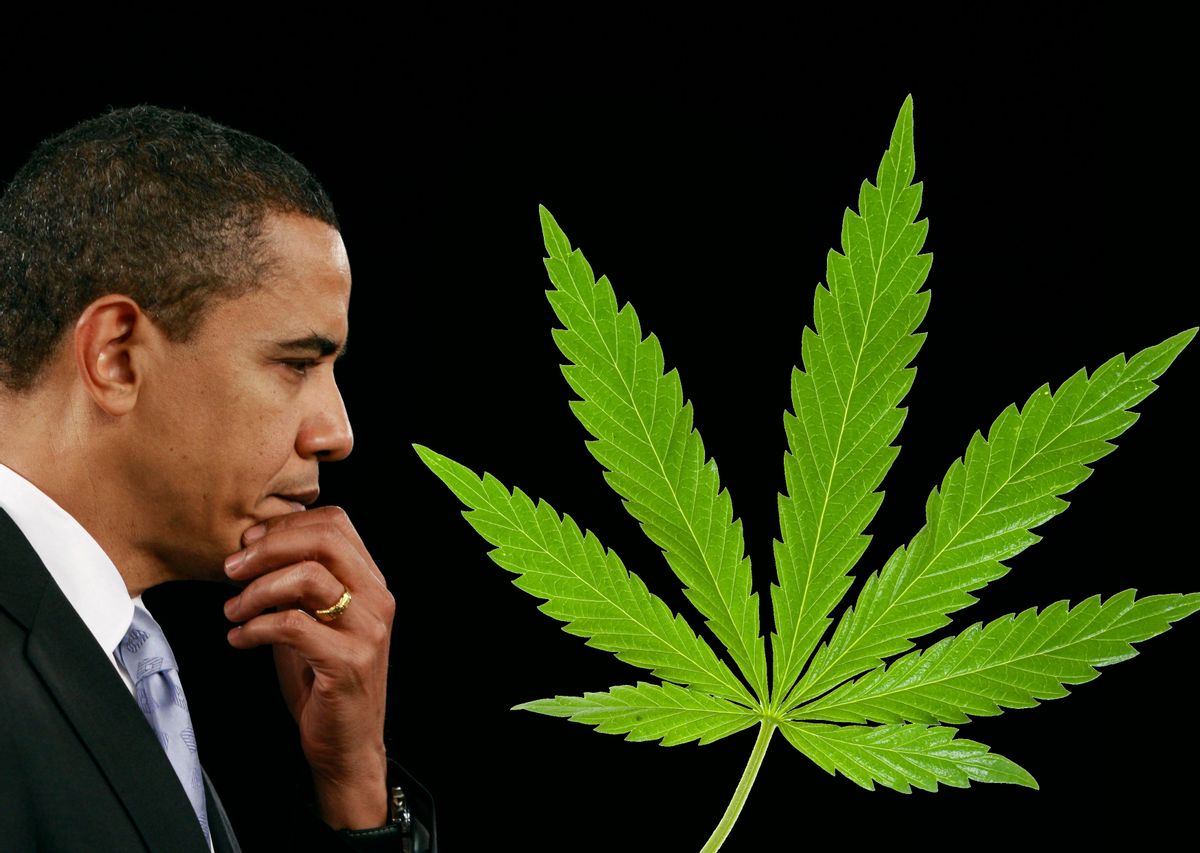 U.S. President Barack Obama is pictured during a town hall meeting in Fort Myers, Florida February 10, 2009. Obama hailed the Senate's approval of an $838 billion economic stimulus package on Tuesday, but said more work remained to get the legislation to his desk for his signature. REUTERS/Jason Reed (UNITED STATES) (Â© Jason Reed / Reuters)
--

The Obama administration publicly opposes Proposition 19, the California ballot measure that would legalize pot. But the White House, perhaps fearful of angering the already frustrated Democratic base, is being conspicuously careful not to draw too much attention to its own stance on the issue.

Attorney General Eric Holder went on the record earlier this month in a letter to former chiefs of the Drug Enforcement Administation saying that the Department of Justice "strongly opposes" Proposition 19. And drug czar Gil Kerlikowske was in the state last week criticizing the measure.

But as far as the administration's active opposition to the measure goes, that's about it.

"It seems like they feel compelled to shake their finger at California. [But] they haven't been super forceful," Tom Angell, spokesman for the group "Yes on 19," tells Salon.

There has been speculation that Proposition 19's presence on the ballot will promote turnout among progressive voters, helping California Democrats -- even though statewide candidates Barbara Boxer and Jerry Brown, like the Obama administration, oppose Proposition 19. That theory could explain why the White House is not eager to talk about its stance on the issue.

When Salon contacted the White House, a spokesman repeatedly declined to criticize the initiative, instead referring all inquiries to the Justice Department. A DOJ spokeswoman referred us to Holder's letter on the issue. And when we called the White House Office of National Drug Control Policy (led by the drug czar, Kerlikowske), a spokesman was careful to point out that Kerlikowske went to California last week only after he was invited there by a local group. That's a distinction without a difference, but it's another sign that the administration is not eager to broadcast its opposition to the measure.

Angell, the Yes on 19 official, characterizes the administration's opposition as lukewarm. He points to a plea from a group of former DEA administrators, who, in the event Proposition 19 passes, want the federal government to sue California, asserting the Constitution's Supremacy Clause. (This is what the administation did in the case of Arizona's immigration law.) In his response letter, Holder pledged that federal drug law would be "vigorously enforced" and that the DOJ was mulling its legal options in case the initiative passes. But, Angell notes, Holder fell short of promising to sue California over the measure.

As for the president himself, he has not commented publicly. When asked about the measure at an MTV youth forum earlier this month, he seemed to play down the idea of prosecuting people for possession of small quantities of drugs:

QUESTIONER: So my question for you is this: When Arizona passed a law, the Justice Department said it infringed upon their jurisdiction and struck it down. However, when California passed the legalization of marijuana, an issue with drugs -- which also ties into federal policy -- the federal government said that they would stay out of the way. How do you reconcile those two things, particularly how they relate to the border and the security of our country?

OBAMA: Well, let me first of all be clear. When it comes to our approach to federal drug enforcement, we take federal drug enforcement extraordinarily seriously, spend a lot of money on it. But obviously we have to figure out who is it that we're going after, because we've got limited resources. And so decisions that are made by the Justice Department or the FBI about prosecuting drug kingpins versus somebody with some small amount in terms of possession, those decisions are made based on how can we best enforce the laws that are on the books.

Support for Proposition 19, meanwhile, has in recent weeks been rapidly losing support in the polls after months of maintaining a small lead. It would be supremely ironic -- and would suit the Obama administration just fine -- if supporters help propel anti-Proposition 19 Democrats to victory in California, even as the measure itself falls.