Not your ordinary traffic jam 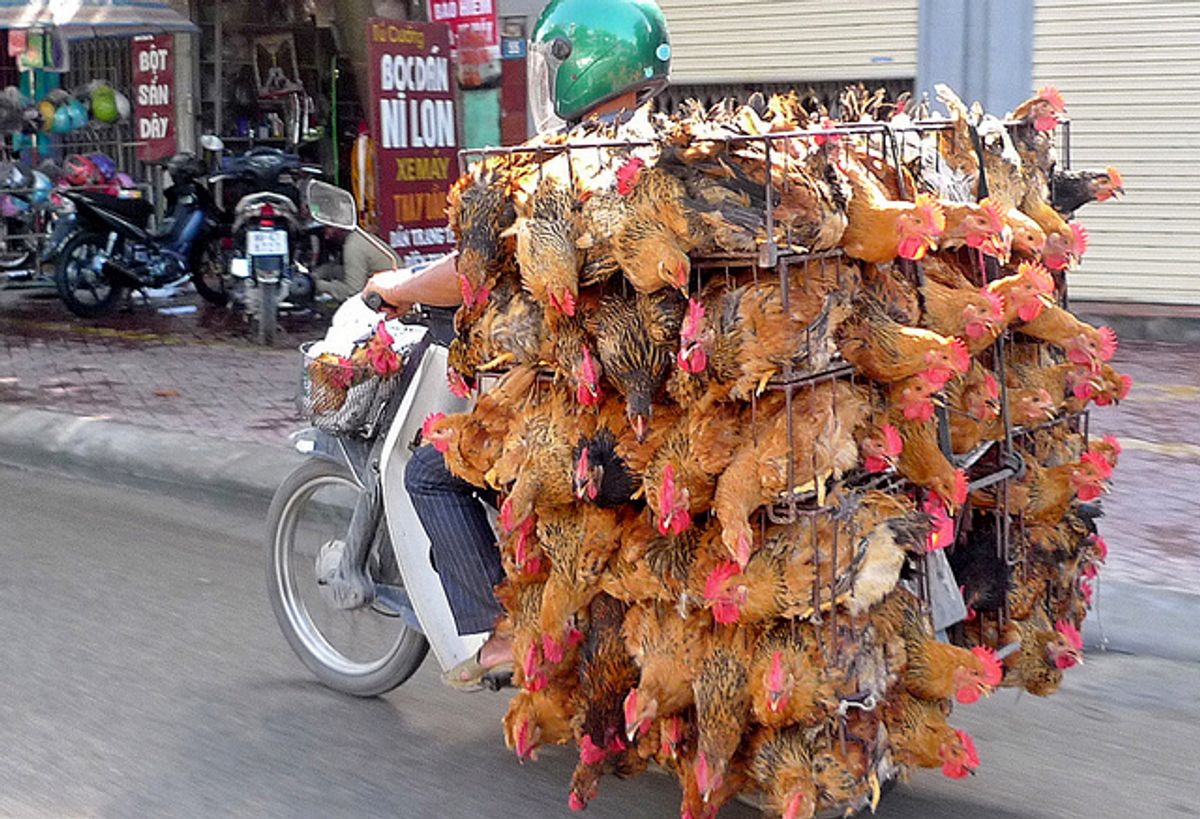 The guidebooks will tell you that the highlight of a trip to Hanoi is an excursion to the Ha Long Bay, about three-and-a-half hours drive east of the city. And maybe they're right. Ha Long, a UNESCO World Heritage Site, is easily one of the world's most scenic places, with its insane vista of sawtooth karsts -- thousands of them, each hundreds of feet high -- jutting from the sea.

But it's the traffic, above and beyond anything else, that I'll best remember about Hanoi itself.

If all the world's travel writers joined forces to describe the capital's traffic, I reckon they wouldn't do it justice. I'll give it my own pedestrian take (pun intended), ill-equipped as my talents are at coloring such a vivid spectacle.

It's a peculiar kind of traffic, unlike, say, the aggressive chaos of Cairo or the steam-cooked gridlock of Bangkok. It's not a traffic jam, per se, for the flow seldom stops. Rather, it moves as a river moves: unyielding, yes, but steady and predictable in both volume and velocity -- an incessant whitewater of internal combustion.

And the majority of vehicles are neither cars nor trucks, but hundreds of thousands of scooters, motorbikes and a dwindling number of bicycles. The people of Hanoi are in constant motion atop some form of two-wheeled transport or another: men and women; sidesaddle girls with parasols; toddlers (sans helmets) clutched to the backs of their parents.

Much, if not all, of Hanoi's commerce, too, moves this way, with bales, boxes and everything else towering above the driver (plus, often enough, a passenger or two). It quickly becomes a game of sorts, pointing out the various and impossible cargoes tottering around the city in great, center-of-gravity-defying loads: a foursome of 50-gallon drums; an outboard motor; a 300-pound pneumatic drill; stacks of caged chickens; a tree.

Everything but the kitchen sink, you'd say, except, wait, there it goes: an old Chinese two-stroke hauling not one but two porcelain sinks, complete with countertops and plumbing, their metal legs sticking dangerously at adjacent vehicles.

The rules of the road, if we can call them such, are pretty straightforward: go, go and keep going, eyes locked ahead. There is no slowing down, no veering for the benefit of other motorists -- and certainly not for pedestrians. Every intersection is a hive of crisscrossing vehicles that somehow, against any logic and seemingly against physics as well, manage to miss each other.

Whatever forces keep the vehicles from crashing, it is invisible to the naked eye. Only in slow motion, perhaps, would some system of order, some measure of give and take, actually be revealed. The traffic acts as a single organic thing, with each participant, like the legs of a caterpillar, responsible for a series of rapid, almost imperceptible moves.

From the tourist's perspective, it's difficult to fathom how anybody is able to cross a street and survive to tell the tale. It's tempting to wonder if perhaps they don't, and you can imagine the people on either side of a road having spent their entire lives apart, separated by a kind of Berlin Wall of impenetrable traffic.

But they do cross. And the tourist, too, has little choice but to eventually give it a try. You creep ever so gingerly into the swarm. You do not wait or ask for the right of way, you take the right of way, in a steady procession of quick, head-to-head duels with each oncoming rider. The pedestrian moves slowly, but fluidly. It's a swim, a battle dance.

Of all the perilous, even hilarious things to see, few are more unnerving than the sight of young children, even entire families, crammed onto a single motorbike, swerving down the boulevards and racing through intersections. Here's a typical example. Most of the children are unhelmeted and many are unrestrained.

There is nothing remotely safe about this practice, don't get me wrong, but I feel there's a lesson in there somewhere -- in the stark contrast it provides to the smothering, hyperprotective form of parenting we're accustomed to seeing in the U.S. This is the other extreme, of course, but in a way it makes you wonder where the sane middle ground might lie.

At one point, as a storm moved in, I watched as a woman frantically affixed a plastic rain slicker to her toddler as he hung precariously to the back of her Honda scooter. Moments later, mother and son were roaring through traffic again, neither with a helmet, the child grabbing on as best he could.