The Halloween that ended my childhood

I was 10 years old and foolish enough to think life was fair. Then came the costume contest that proved me wrong 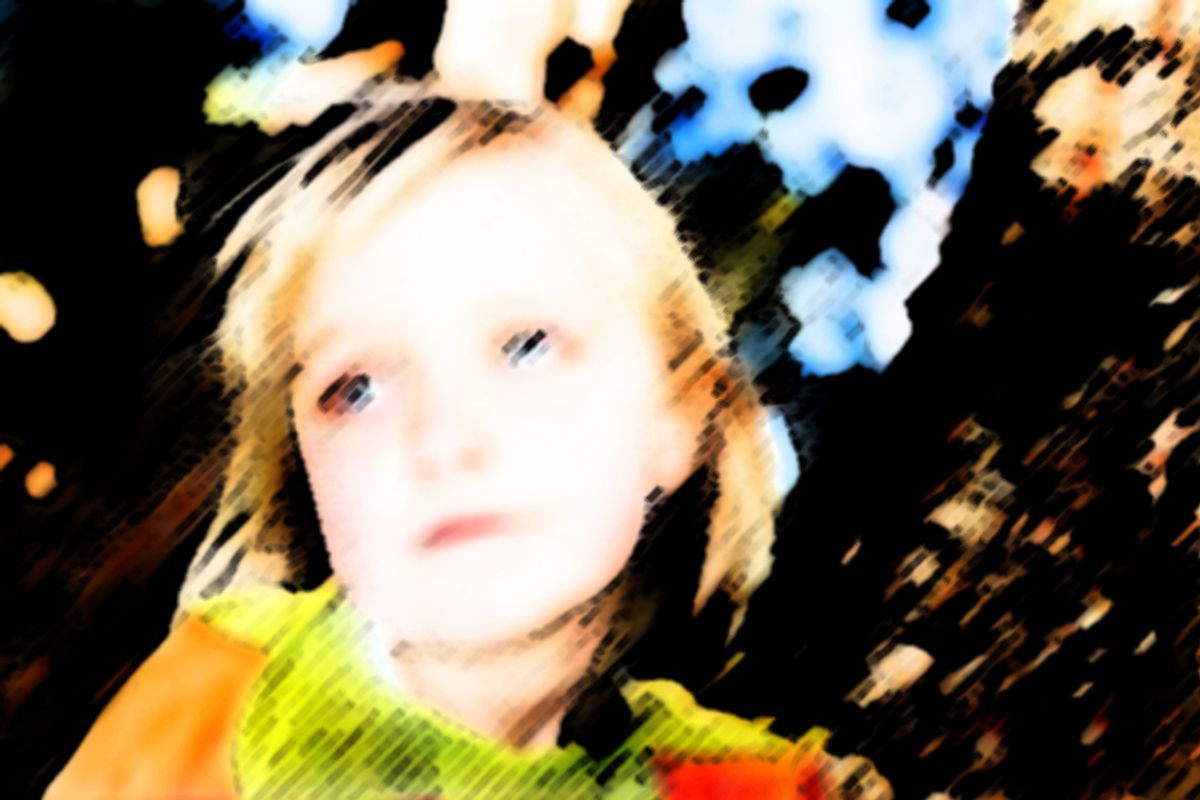 The year I was a pumpkin and my cousin Gloria-Jean was a tree, Halloween fell on a night with a blue moon. My brother Skip, 15 years old and dressed up as a hobo like all the teenage boys, told me this as my mother stuffed newspapers into the orange felt pumpkin suit she'd made. I was in that pumpkin suit, wearing orange tights and my white Keds, my arms outstretched as she tried to make skinny me look fat.

"Do you know what a blue moon is?" Skip asked me.

This was the third consecutive year Skip had dressed like a hobo. It seemed to my 10-year-old self that he had gone from winning first place in the Cub Scouts Halloween party, dressed as a glamorous girl in a blond wig with a black cigarette holder clenched between his teeth, to losing all interest in dressing up. All teenagers did, I assumed. Among the devils and witches, cowboys and astronauts, mingled teenage boys dressed as hobos and girls in their real cheerleader outfits.

"A blue moon," Skip explained, "is the second full moon in a month. See, most months there's only one full moon."

My mother beamed at him. To her, Skip was the smartest, most handsome boy in town. Maybe even in the whole world. Her love for him was evident and enormous, and it always made me feel unimportant.

"Mmmhmm," she said, unimpressed. Her mouth was lined with straight pins. Once I was stuffed, she would pin the pumpkin suit closed. Before I stepped into it, she ordered me to go to the bathroom because I wouldn't be able to go again for the rest of the night.

Like every kid, I had been looking forward to Halloween all week. In school, we made witches' hats out of black construction paper, cutting triangles that we decorated with gold and silver glitter, orange pompoms, and pieces of orange bric-a-brac. My teacher, Mrs. Kennedy, handed out candy corn at the end of the day and told us to be safe crossing the street tonight and not to eat any apples we got trick-or-treating; apples, as everyone knew, harbored razor blades.

I never got to choose my own costume. Secretly, I coveted the princess costume at Ann and Hope, our local discount store. A long pink dress with a fitted bodice, stiff tulle beneath and lots of sparkles on top, it came with a plastic gold crown and a wand with a gold star at the tip. I didn't bother to ask my mother to buy it. We were a family that made our Halloween costumes. Or, more accurately, my mother made them. She took no suggestions or advice. Halloween costumes were her territory. She was the brain behind my brother's winning girl costume, stuffing her own bra with newspapers for him to wear under a cashmere sweater and smearing red lipstick on his lips.

This year, she'd made me this pumpkin suit. When she finished stuffing it with newspapers, she would bobby-pin a green felt hat to my long blond hair. The hat had a complicated stem made of real bark and wire. I wanted nothing more than to win first place at my Girl Scout troop's Halloween party, which began at 5 p.m. sharp and let out in time for us all to go trick-or-treating. Oddly, first prize was dinner for two at the Club 400, a local place where everyone in town had their proms and weddings.

I imagined taking my mother there with my prize, eating ziti and baked chicken and string beans almondine while I told her about winning the spelling bee and reading every Nancy Drew book and how I would rearrange the television schedule each night, if I had the chance. I imagined how I would shine in her eyes if it were just the two of us, away from the dazzling brightness of my brother.

Stuffed and pinned and the felt hat fastened, I was ready to go. My cousin Gloria-Jean arrived, dressed as a tree. Her father, my mother's brother Chuckie, also dominated costume making in their family. This year, he had dressed Gloria-Jean in a felt costume reminiscent of Peter Pan, except that he had wired her arms stretched outright and covered them with leaves. Unfortunately, she wouldn't be able to lower them all night. But a tree didn't lower its boughs, did it? Uncle Chuckie asked. On top of her brown curls, he'd bobby-pinned a nest made of straw. Inside the nest sat two eggs that he'd hard-boiled and dyed blue. "I can taste that ziti already," he said, licking his lips.

Gloria-Jean and I were sent on our way to Sacred Heart Church, which sat at the bottom of the hill where I lived and which hosted all scout meetings. At 7 sharp, my brother and his friends would pick us up there and take us trick-or-treating in a neighborhood with houses newer than ours where we believed they gave better candy.

I waddled beside Gloria-Jean down the hill to the church. I was already on thin ice with the Girl Scouts. Our first merit badge had been in sewing, and Mrs. D had us bring in an empty plastic Clorox bleach bottle, cut it in half, and sew fabric onto it to make a bag for hair curlers. But I could not get the needle through the plastic. Who wanted a curler bag anyway? I wondered. I studied the handbook, fantasizing about all the merit badges I might get: archery, swimming, community service. And reading! I'd read every book in the school library. I read four books a week from the town library. I already had earned a reading merit badge.

But Mrs. D told me she would not submit the papers for reading until I finished my curler bag. "I ain't gonna use up all my stamps mailing in your paperwork," she said, taking a long drag on her cigarette. "Finish your curler bag like everybody else." She exhaled a big stream of smoke, like an exclamation point. We were still at an impasse.

Gloria-Jean and I did not have any friends in the troop, so we stood together until finally Mrs. D announced it was time to reveal the winner of best costume. She wagged the gift certificate to the Club 400 in the air, then called for silence.

"The winner of best costume," she said, chewing her gum fast and furious, "is ..." She studied all of us, her eyes beneath their blue-eye-shadowed lids and mascaraed eyelashes seeming to settle on each of us, as if anybody might be the winner. "Is ..." Mrs. D opened her arms wide and shouted, "My daughter! Ronnie!"

Veronica DiGregorio -- Ronnie -- shrieked with surprise and ran up on the stage.

My brother and his band of hobos arrived, just in time to get us out of there.

"You should have won," I told Gloria-Jean.

"One of us should have," she said. "At least our costumes are original."

My brother made us walk half a block behind him and his friends. "And don't talk to us," he ordered.

They went up to each house first, and got their treats. Then we were allowed to knock on the door and get ours. My pillowcase grew heavy with candy, but all I wanted to do was go home, get out of my pumpkin costume and climb into my bed with a book. Something had changed for me that night. All day, as I cut out and decorated my witch's hat, as I nibbled candy corn, as I stood still while my mother stuffed me with newspapers, I had believed in possibility. In that church basement, I had believed I might win. I had believed that my mother and I would be together for that dinner, just the two of us, and that she might see me differently then.

But now, all that was gone.

Gloria-Jean and I knocked on a door, halfheartedly. It flung open, and a man dressed as Count Dracula greeted us. Behind him, grown-ups in Halloween costumes drank and laughed and shouted. Music played. I saw a woman dressed like Barbara Eden from "I Dream of Jeannie," a man dressed as a pirate. I had never before seen adults dress up for Halloween, and it felt wrong somehow. They looked grotesque, frightening, all of those middle-aged people with their garish makeup, sexy costumes, bright lips.

I stepped back, afraid.

Gloria-Jean ran down the path, grabbing me as she did.

"Don't you want my Charleston Chew?" Count Dracula called after us.

The neighborhood had curving streets lined with small split ranches. The trees cast shadows on us as we stood beneath that full blue moon. Somehow I knew that this was my last Halloween when I would go trick-or-treating. Something I did not yet understand was coming to an end. I lifted my face up toward that big moon. In the distance, I heard hobos approaching. I heard the music from that house with the adult Halloween party seeping out into the autumn air.

"My arms hurt," Gloria-Jean whispered to me. "I want to go home."

But still I stood in that spot, unable to move, afraid of what was coming next, of what lay ahead.

Ann Hood is the author of the novel "The Book that Matters Most," published this month with W.W. Norton & Co.