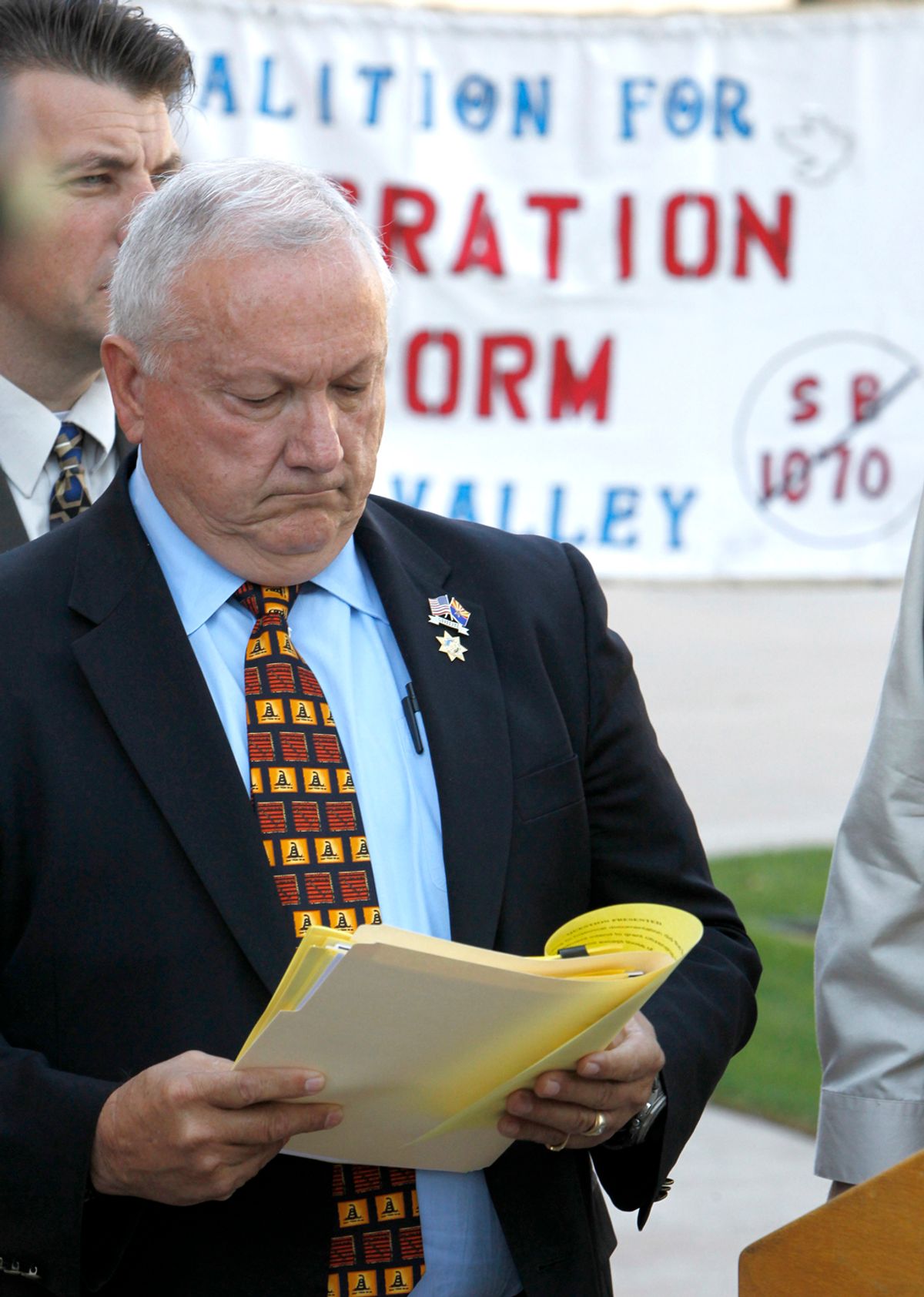 With protesters holding a sign in the background, Arizona state Sen. Russell Pearce, R-Mesa, checks notes before speaking at a news conference about efforts by state legislators to propose legislation to deny U.S. citizenship to children of illegal immigrants Tuesday, Oct. 19, 2010, in Phoenix. The efforts by the state legislators come amid calls to change the U.S. Constitution's 14th Amendment, which grants automatic citizenship to U.S.-born children of illegal immigrants. (AP Photo/Ross D. Franklin) (Ross D. Franklin)
--

When it comes to creating demand for a previously unnecessary service and making a profit by any means necessary, you can't beat the private sector. So no one should be surprised that the private prison industry is in part responsible for the Arizona immigration law that requires state law enforcement agencies to enforce federal immigration law (read: lock up anyone suspected of being Hispanic until and unless they can prove their citizenship). NPR investigated the prison industry's role in drafting and passing SB 1070. It's pretty depressing.

And this bill was an important one for the company. According to Corrections Corporation of America reports reviewed by NPR, executives believe immigrant detention is their next big market. Last year, they wrote that they expect to bring in "a significant portion of our revenues" from Immigration and Customs Enforcement, the agency that detains illegal immigrants.

In the conference room, the group decided they would turn the immigration idea into a model bill. They discussed and debated language. Then, they voted on it.

"There were no 'no' votes," Pearce said. "I never had one person speak up in objection to this model legislation."

They even named it. They called it the "Support Our Law Enforcement and Safe Neighborhoods Act."

"ALEC is the conservative, free-market orientated, limited-government group," said Michael Hough, who was staff director of the meeting.

Hough works for ALEC, but he's also running for state delegate in Maryland, and if elected says he plans to support a similar bill to Arizona's law.

Asked if the private companies usually get to write model bills for the legislators, Hough said, "Yeah, that's the way it's set up. It's a public-private partnership. We believe both sides, businesses and lawmakers should be at the same table, together."

When Pearce introduced his bill the next month, he immediately got 36 co-sponsors. The prison company hired a lobbyist. 30 of the co-sponsors began receiving campaign donations from prison companies and lobbyists.

And that's how a bill becomes a law.