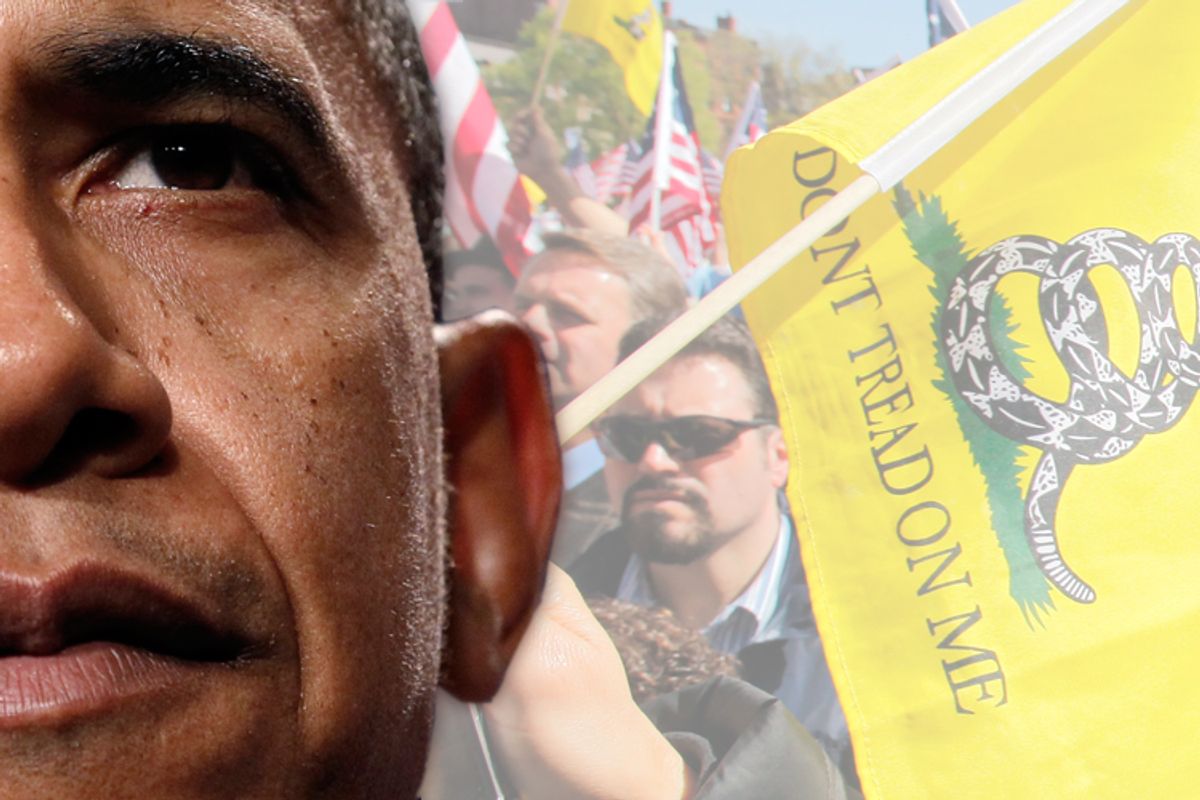 Something extraordinary, it would seem, is taking place in American politics. After all, it was just two years ago that Barack Obama was elected to the presidency with a larger share of the vote than any Democrat since LBJ in 1964. And he was equipped with the biggest Democratic majority in the House since 1994 and the biggest in the Senate since 1978. Three decades after the Reagan revolution, we were told, the Republican Party had reached a state of terminal decline.

But now, just two years later, the GOP is poised for a massive comeback. Obama's poll numbers long ago fell under 50 percent, with public confidence in him and his party tanking. A Republican takeover of the House is now likely. The Senate might go too, along with numerous governorships and state legislative chambers.

If it all seems difficult to comprehend, it's not. As momentous as next Tuesday's midterm election figures to be, the factors that have brought us to this point are the opposite of extraordinary. It's actually fairly easy to understand how it came to this, as long as you reject the two big myths that are embedded in most news coverage and analysis of the midterms.

I. The decline in Obama's public standing -- from an approval rating over 70 percent when he started out to 44 percent in the latest Gallup poll -- represents a broad popular rejection of his liberal ideology or a colossal failure of messaging, strategy and legislative prioritizing on the White House's part (or both).

Obama's anemic poll numbers are the best thing that could have happened to cable news, because they present something of a Rorschach test: Every politician and pundit has an explanation that, invariably, meshes neatly with his or her own agenda. It always makes for a lively discussion.

Ideologically, we have Charles Krauthammer on the right proclaiming that "[n]o fanciful new syndromes or other elaborate fictions are required to understand that if you try to impose a liberal agenda on such a demonstrably center-right country -- a country that is 80 percent non-liberal -- you get a massive backlash." Or there's Michael Barone, who long ago traded in his mainstream credibility for a career as a predictable right-wing pundit, who insists that healthcare reform -- "the most unpopular major legislation passed by Congress since the Kansas-Nebraska Act of 1854" -- is to blame. The left has its own wishful analysts, like Peter Daou, who is already faulting next week's "train wreck" on too much compromise and centrism from the White House.

Another pundit favorite is to blame messaging and tactics -- the idea that Obama has lost the elusive ability to "connect" with voters that propelled his 2008 campaign. A June 18 column from the New York Times' Charles Blow declared that Obama is

"the emotionally maimed type who lights up when he’s stroked and adored but shuts down in the face of acrimony. Other people’s anxieties are dismissed as irrational and unworthy of engagement or empathy. He seems quite comfortable with this aspect of his personality, even if few others are, and shows little desire to change it. It’s the height of irony: the presumed transformative president is stymied by his own unwillingness to be transformed. He would rather sacrifice the relationship than be altered by it."

Writing in Mother Jones recently, David Corn decreed that Obama's numbers had been felled by "20 months of mixed (or failed) messages." Countless other pundits have offered similar diagnoses.

It's easy to go down this road; I bet you have a pet peeve or two about Obama's agenda, message and political strategy, too! But it all misses one essential point: For all the analysis and debate, Obama's poll numbers are exactly where they should be. We don't need to dissect the language of his speeches or the style of his delivery to understand why his approval rating sits at 44 percent, because 44 percent is precisely where the approval rating should be for a president presiding over an economy this sluggish.

Moreover, it was easy to see this coming, because it's happened before. Ronald Reagan was elected under similar circumstances to Obama in 1980 -- a sweeping victory (with considerable coattails) that was the result of a stalled economy and the country's sagging confidence with the governing party. Reagan's early approval ratings were just as artificially high as Obama's, and -- again, just like Obama's -- began a steady decline in mid-1981, as the economy tanked. At the end of September 1982, the jobless rate pushed over 10 percent, with Reagan's approval rating sitting at 42 percent in a Gallup survey. Today, the jobless rate stands at 9.6 percent, with Obama's approval at 44 percent in the most recent Gallup measure.

The irony, of course, is that there has been no shortage of pundits this year who have compared Obama unfavorably to Reagan, claiming that he lacks the Gipper's magical communications skills -- and that if he possessed them, he (and his party) would be faring better in the polls right now. But against similar economic conditions, Reagan's charm was as worthless as Obama's soaring rhetoric is today. And it cost his part dearly. In the '82 midterms, Reagan's party took it on the chin. (Yes, some revisionists claim that the GOP's 26-seat House loss in '82 wasn't that bad, but a) Republicans only had 191 to start with in the '82 campaigns, compared to the 255 that Democrats now have; and b) the results in '82 were taken by the press and members of both parties as a resounding rebuke of Reagan and his agenda.) Obama's party will similarly take it on the chin next week. The economy, overwhelmingly, is the reason.

It should also be noted that Democrats made deep incursion into Republican-friendly areas in 2006 and 2008, winning House seats that, essentially, they had no business winning. It was the presence of a deeply unpopular Republican in the White House that made this possible; voters -- even in GOP-leaning districts -- were looking for a protest vehicle, and the Democrats provided one. Obama's election changed the equation immediately. Remember that 49 districts voted in 2008 for a Democratic House candidate and for John McCain; with Obama in the White House, many of those same Democrats just weren't going to get the same benefit of the doubt from their electorates. And with the economy in such rough shape, even Democratic-friendly districts are now at risk, with voters there -- like Republican-friendly voters of '06 and '08 -- tempted to use the other party as an outlet for their frustrations.

In the big picture, it's just not that remarkable that Barack Obama's poll numbers are where they are, or that the GOP is poised for big gains.

II. The Tea Party represents a new force in American politics and its candidates have only helped the GOP.

The term "Tea Party" is new to modern politics, but it represents a familiar phenomenon that we see every time a Democratic president and Democratic Congress control Washington: a loud and occasionally hysterical backlash from a suddenly energized GOP base that regards the president and his congressional allies as agents of a radical, anti-American agenda.

Ask Bill Clinton about this. When he came to office, it took about two weeks for the "Impeach Clinton" and "Don't blame me: I voted for Bush" bumper stickers to pop up. The right shrieked when he showed up at the Vietnam Veterans Memorial in 1993 (and cheered when some veterans turned their backs on him), cried "Socialism!" when he proposed universal healthcare, accused him of enacting "the largest tax increase in the history of the world," and circulated all sorts of venomous newsletters and videos that accused him (and his wife) of things like drug-running and murder. (Phil Crane, then a right-wing congressman from Illinois, actually distributed "The Clinton Chronicles" to all of his colleagues, telling them that if the inflammatory charges on the video were true, "The Clinton presidency may be shorter than even we expected." No one thought to call this vehement backlash "the Tea Party," but it appealed to the same types of people who now identify with the Tea Party movement. And before Clinton, Jimmy Carter and Lyndon Johnson felt the same irrational heat from the right.

It is not a coincidence that, as Alan Abramowitz wrote in Salon last week, 96 percent of voters who say they support the Tea Party movement also say they voted for John McCain in 2008. This is not an "independent" or "bipartisan" movement; it is a movement of the Republican Party's conservative base, reacting as it always does when Democrats take control of Washington. (Yes, many self-described independents say they support the Tea Party, but this is misleading: Most "independents" are functionally Democratic or Republican, voting almost exclusively for one party in election after election; they just prefer to call themselves "independent." The '08 voting statistic clearly demonstrates that the overwhelming majority of "independent" Tea Partiers are functional Republicans.)

And yet, we continue to see the Tea Party portrayed as some brand-new, independent phenomenon. Here's how Peggy Noonan put it recently:

In a practical sense, the tea party saved the Republican Party in this cycle by not going third-party. It could have. The broadly based, locally autonomous movement seems to have made a rolling decision, group by group, to take part in Republican primaries and back Republican hopefuls.

This is just not true. Yes, it's difficult to tell one Tea Party group from the next and to discern any kind of hierarchy, but the voters who identify with it are clearly, overwhelmingly Republican. The only difference between now and 1994 is that they're also mad at the GOP's establishment. But again, this isn't really new. The right was also mad at the GOP establishment in the late 1970s, when Carter was president; that’s the last-time we saw the high number of competitive primary challenges to establishment Republicans that we've seen this year.

Which brings us to another misconception about the Tea Party: that it hasn't complicated the GOP's November outlook by nominating a handful of fringe-seeming candidates in key Senate battlegrounds. It has.

Sharron Angle is a perfect example of this. Her extreme positions and volatile campaign trail rhetoric and antics have kept her from pulling away from Harry Reid, her deeply, deeply flawed Democratic opponent. Given the national climate and his own poor image in Nevada, Reid should be losing this race by 15 to 20 points right now; had the GOP nominated a generic candidate, he'd have been given up for dead back in May. The only reason he has maintained a political pulse through the summer and fall is the presence of Angle, whose liabilities are so extensive that voters -- who badly want to vote Reid out -- have struggled mightily to commit to her. Angle may end up winning; the most recent polls put her several points up. But if she does, it will be in spite of the GOP's decision to nominate her, not because of it. As Bobby Cox, the now-former Braves manager, once put it: Let's not confuse favorable outcomes with good decisions.