A homophobe pleads for forgiveness

Arkansas school board member Clint McCance apologizes and steps down on CNN. But is it enough? 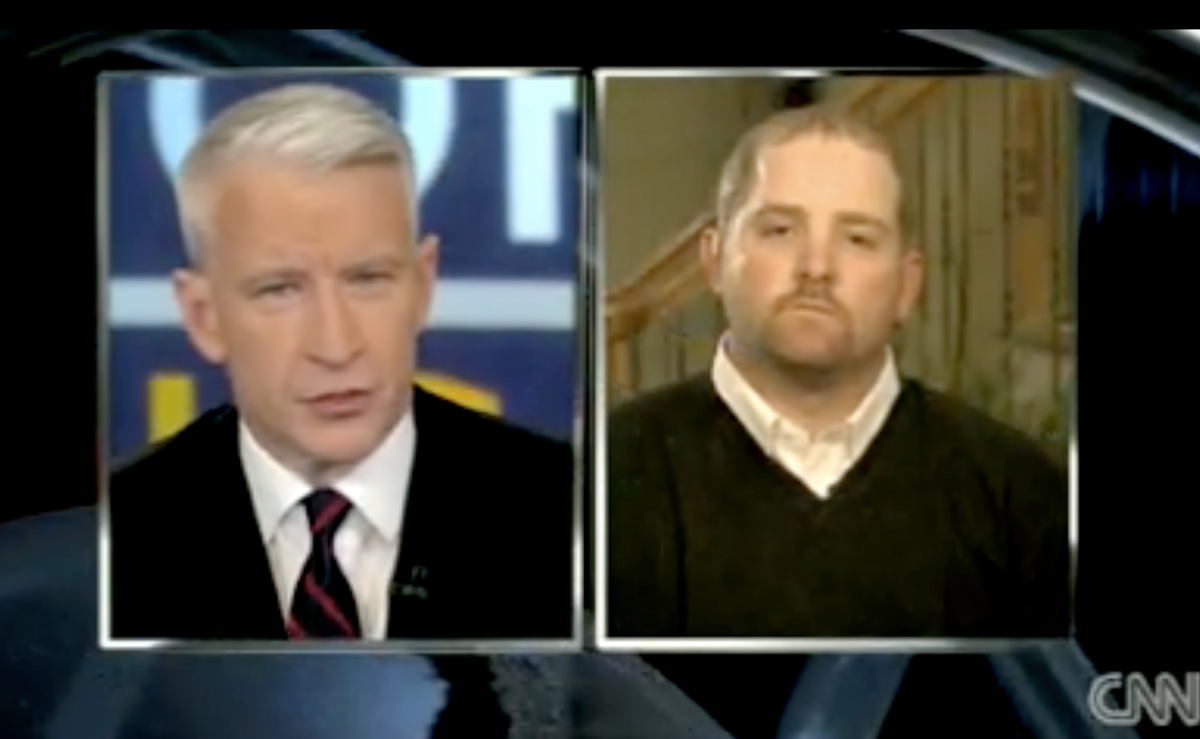 He said he was sorry. On Anderson Cooper's "360" Thursday night, Clint McCance, the homophobic, grammatically challenged Arkansas Midland School District vice president who gained infamy this week for blurting on Facebook that "they want me to wear purple because five queers killed themselves. The only way im wearin it for them is if they all commit suicide" and "I also enjoy the fact that they often give each other aids and die," faced the music and apologized to the world for his massive jerkwaddery. "I'm sorry I've hurt people with my comments," he said. "I'm sorry I made those ignorant comments and hurt people on a broad spectrum."

Sounding considerably more evolved and familiar with the English language than the doofus from the Facebook rant, McCance told Cooper, "I made some very ignorant comments. I did not realize just how ignorant they were. I would never support suicide of any kids; I don't support bullying of any kids." And when Cooper asked him if he was staying on the school board, he announced his resignation. "It is to help my community, to help my school. I don't want them to receive bad press or have a distraction because of ignorant comments I made."

It would be lovely if McCance had attained a sudden and profound new level of humanity, but a guy who felt strongly enough to post those comments in the first place is going to need some time. Apologies can be swiftly made, but changing core beliefs takes patience. And when McCance vaguely explained his actions by saying, "I used some really strong language and it wasn't correct. It was too emotional. … The words I used were unfortunate. I should have picked different ones … It was over the top. I went too far," he made it clear that he still sees his words as more troublesome than his comprehension of human dignity. You went "too far," McCance? You were too far straight out of the gate, sir. His stammering "Uhhhh, no I don't" when Cooper asked him point blank if he wants gay people to die wasn't the most convincing moment of television ever broadcast either.

Sickening as McCance's comments were, there is much that's encouraging in the way his meltdown ultimately played out. The fact that his remarks were met with near-universal disgust -- and perhaps even more significant, that his outburst had been prompted by his school's participation in an anti-gay bullying "Spirit Day" campaign -- are hopeful signs that there is a vast community of people all over the world unwilling to stand by in silence when confronted with prejudice and cruelty. The creeps, whether they're middle school students or members of school boards or political candidates, need to be reminded of that, on a regular basis. And the kids who are picked on and harassed need to know that too. They need that desperately.

But the worst thing any of us can become is the thing we despise. In the wake of McCance's revolting posts, he's received threats and had his phone number and home address posted on Facebook. He told Cooper Thursday that he's had to send his wife and children out of state and is installing a home security system. "I'm reaping what I've sown," he said. "I've had a lot of hate speech thrown at me and my family on every level." For McCance to be revealed to the world as a colossal jerk, to lose his stature as a leader in the community, to be publicly called out for his bad behavior -- yeah, that seems a fair reaping. But to be harassed and threatened, to have one's family threatened, that is not at all fair, ever. McCance doesn't deserve that any more than anybody else does.

A bigot doesn't change overnight. He definitely doesn't change when he is  himself attacked. McCance may only have apologized after thousands of people pointed out how vile his comments were, but short of getting in a time machine and unringing that particular bell, there's not much else he can do now. McCance now has a chance to open his mind, but he will never get there without forgiveness. Remember us? We're supposed to be the good guys. We can't cure bullying with bullying. And anyone who believes that we all should be safe from harassment has to understand that includes Clint McCance and his children too. As David Truon, whose 13-year-old stepson, Seth Walsh, killed himself in September, told Cooper, "Show him compassion. That's the only thing we can really offer him and his family now."