Or is real life not really like an awesome spy movie? 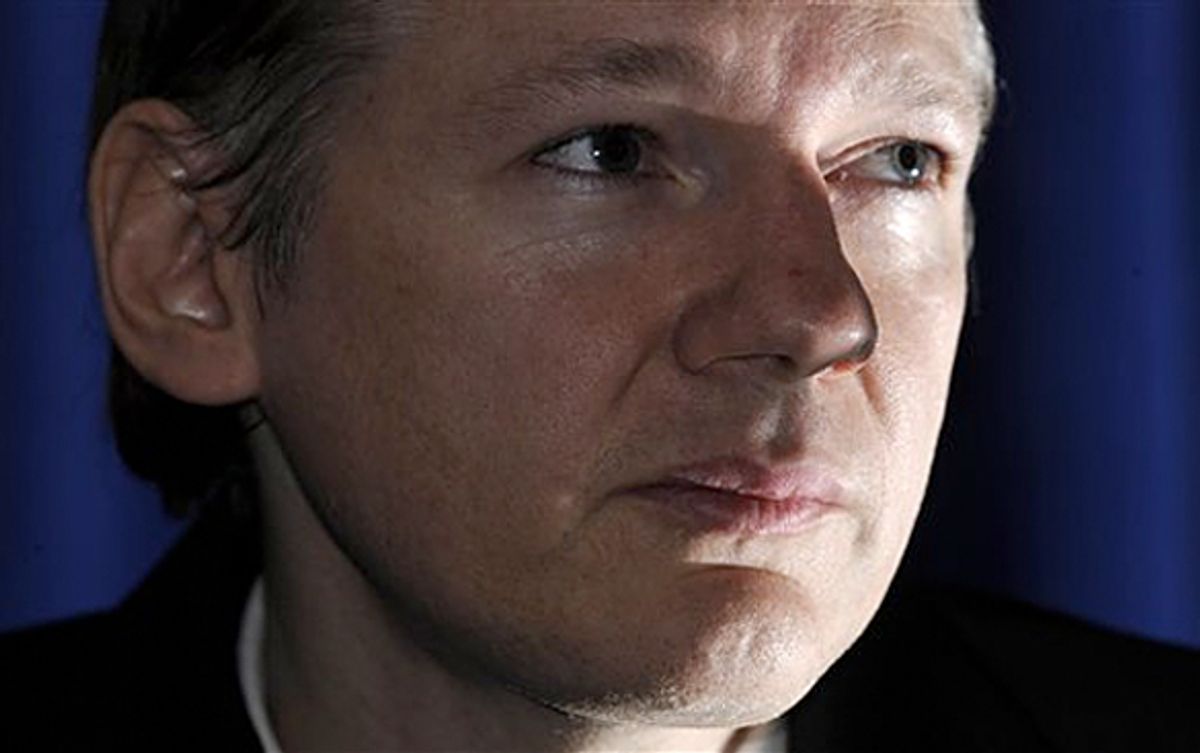 National Review legacy admission Jonah Goldberg wrote a very, very smart political column about how it's weird that WikiLeaks founder Julian Assange is not yet dead. The point of the column is to assert that Assange should be murdered, because he is obviously horrible, while also saying that Goldberg is "OK" with the government not assassinating a foreign national guilty of no actual crime, so that people can't say Goldberg called for Assange to be killed.

In case you didn’t know, Assange is the Australian computer programmer behind WikiLeaks, a massive — and massively successful — effort to disclose secret or classified information. In a series of recent dumps, he unveiled thousands upon thousands of classified documents from the wars in Afghanistan and Iraq. Military and other government officials insist that WikiLeaks is doing serious damage to American national security and is going to get people killed, including brave Iraqis and Afghans who’ve risked their lives and the lives of their families to help us.

Even Assange agrees. He told the New Yorker earlier this year that he fully understands innocent people might die as a result of the “collateral damage” of his work and that WikiLeaks may have “blood on our hands.” WikiLeaks is easily among the most significant and well-publicized breaches of American national security since the Rosenbergs gave the Soviets the bomb.

So again, I ask: Why wasn’t Assange garroted in his hotel room years ago?

Gawker's John Cook had a Serious Question of his own: Why hasn't Jonah Goldberg been punched in the face yet today?

Anyway, this game of Jonah's is fun, so back to our opening question: Why hasn't he been punched, hard, in the face yet today? After all, he upsets liberals, and we all know that liberals are violent thugs, right? "The left" routinely justifies the "glorification of violence" and "gangsterism" of "black riot ideology" and wants to kill all white people as badly as Hitler wanted to kill all Jews. Liberals engage in a "symphony of violence" and, as Goldberg astutely points out in his book, are fascists. So how come some angry liberal hasn't decked him yet today, fascistically? Just asking. We don't think, by the way, that anyone should physically assault Goldberg. That would be illegal.

When you criticize or make fun of Jonah Goldberg, he invariably responds in one of two ways: He says you didn't understand his argument or he says he can't respond now because he is on a deadline / is taking his kids to the zoo / is in the middle of a Darkwing Duck marathon.

With Cook, Goldberg chose option A: "I think he’s upset about the things I don’t say but which he thinks I should so it would be easier for him to write something halfway intelligible." (Goldberg added a dose of Internet-hardman talk, writing, "if he thinks I need to be punched in the face, I invite him to give it a whirl himself.")

So let's look at what Goldberg did say! After listing Assange's crimes, Goldberg starts talking about how in movies and TV shows, spies kill people all the time, and it's really cool. So I guess he is asking why real life is not like a Jason Bourne movie.

Then he says that liberals think "[the] CIA and similar outfits are either evil and incompetent, or evil and super-competent," based on the fact that Oliver Stone thinks they killed JFK, which I guess means that this part of the editorial is also about the many interesting ways in which real life differs from movies.

Then he says that conservatives think America's patriotic black-ops assassination squads are "either well-intentioned bunglers or noble ninjas in London fog trench coats." Then he says "shrimp-on-the-barbie" because Assange is Australian and that is a funny joke about Australians. (That's not a dated reference -- this is a dated reference.)

He claims -- twice -- that some people think our intellegence agencies and assassins are competent and others think they are incompetent, but "either way" Assange should be dead. Well, no, not if the ones who lean toward incompetent are right.

Now, I know there are many solid answers to my question. For starters, the world isn’t nearly so dramatic as novelists, bloggers, self-important journalists, and nostalgic former spies often claim it is. The main evidence that the U.S. government didn’t bring down the World Trade Center on 9/11 is that no one has the ability to pull off a conspiracy like that. And the people who come closest — i.e., those very same spies — are too decent and patriotic even to imagine trying.

So Julian Assange isn't dead because 9/11 wasn't an inside job because real life is not like movies.

Then Goldberg writes this:

Indeed, most of the documents from WikiLeaks debunk the vast majority of conspiracy theories that fueled so much idiocy on the left for the last decade. No sinister plots involving Halliburton or Israel have been exposed — because they only existed in the fevered fantasies of some coffee-shop dissidents.

This suggests that not only has Goldberg not read any of the leaked documents (which are field reports that have nothing to do with anything about intelligence or the run-up to the war), but that he has never even skimmed a newspaper article that describes what the documents actually contain. I think literally everything Jonah Goldberg knows about WikiLeaks, and Assange, and the documents they've released comes from this editorial cartoon.

So, to sum up, Julian Assange is evil but no one will assassinate him because we do not live in a movie, this is real life.

To which I ask: Why hasn't a piano ever fallen on Julian Assange's head? After all, cartoons tell us that this happens all the time!