"David, you've never had family values. You demonstrated that to America quite keenly" 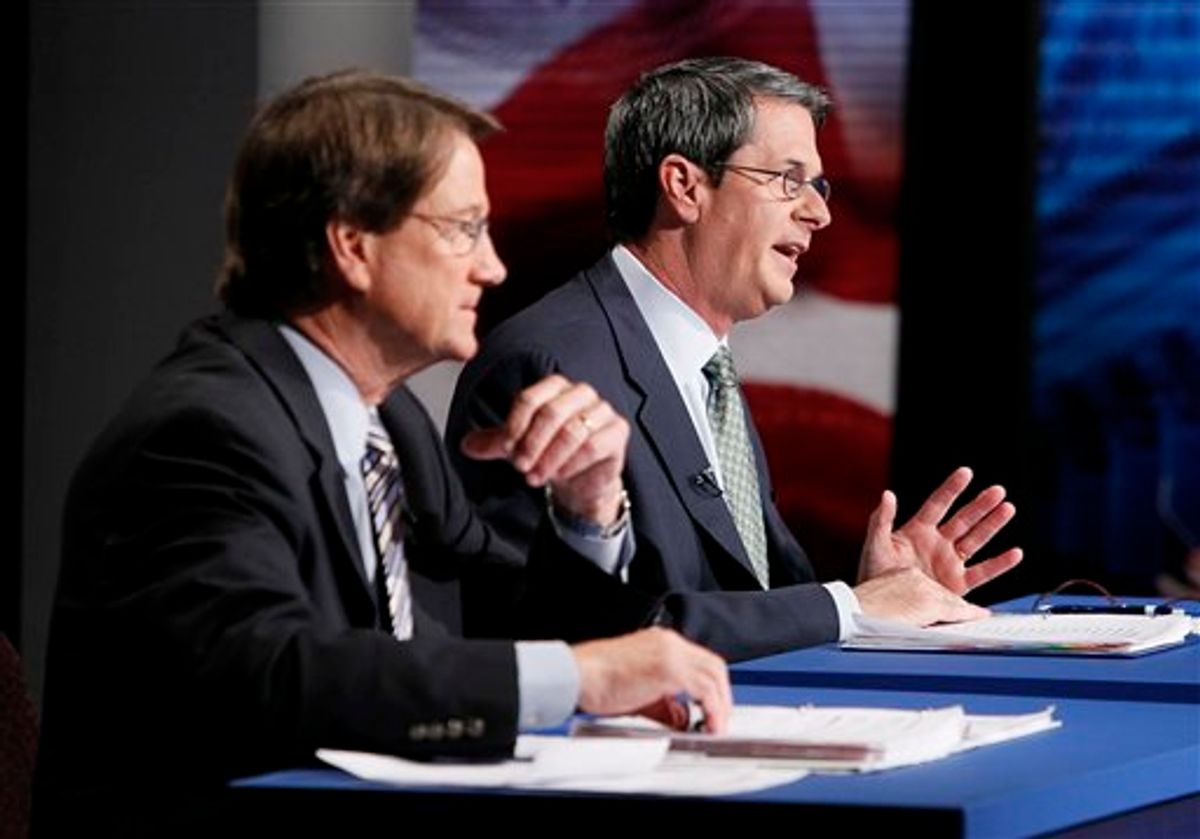 When the election is less than a week away and you've been trailing your opponent by double-digits for  months, you've really got nothing to lose. So you can certainly understand why Democrat Charlie Melancon, in the final debate of Louisiana's Senate campaign last night, bluntly and repeatedly challenged David Vitter  over the "serious sin" that the senator confessed to a few years back.

Melancon's most forceful attack came when the candidates were given a chance to air their grievances with their opponent's attacks. Vitter complained that Melancon had included his children in a two-minute "R-rated" anti-Vitter ad this summer -- one that focused on Vitter's prostitution scandal. "If that's part of your Melancon family values, Charlie, I don't want anything to do with it," Vitter told his opponent.

"David," Melancon shot back, "you've never had family values. You demonstrated that to America quite keenly"

"You railed against Bill Clinton and the blue dress," he said. "You railed against Bob Livingston because you coveted his seat, when he had an indiscretion. And then you said, 'They sinned, they lied, and they should resign.' You sinned, you lied, you've broken the law, you've embarrassed the state."

Vitter, who has never publicly addressed the specifics of his "serious sin," was also asked by a debate panelist whether he had broken the law. But he dodged the question.

"I’ll be honest with you," he said. "I think Louisiana citizens all around the state heard me, and I think they understood me. They understood what I was saying."

To which Melancon replied: "Mr. Vitter has a problem with the truth. You just heard it. He would not admit that he lied, that he broke the law."

You might think Melancon would benefit from all of this, but he probably won't. Vitter is a perfect example of how a deeply flawed candidate can be protected simply by having the right party label in the right political environment. Louisiana is a conservative and increasingly Republican state, but in 2008 -- when even GOP-friendly voters were willing to vote for Democrats out of frustration with George W. Bush -- he would have been in serious trouble, and a candidate like Melancon, a moderate-to-conservative Democrat who represents a GOP-leaning district in the House, would have been well-positioned to beat him.

But when Barack Obama was elected with deep Democratic majorities in 2008, the equation changed almost instantly. Louisiana's voters may not be too fond of Vitter, but that doesn't matter in 2010; they are not in the mood to remove a Republican senator and to send another Democrat to Washington -- no matter how aggressively Melancon plays the hooker card. Thus, poll after poll has shown Vitter comfortably ahead. He should win easily on Tuesday. Still, if you're outraged that he's getting away with a sex scandal (especially after criticizing Bill Clinton for his), then you'll probably enjoy this exchange from last night: