The Tea Party is bad for business 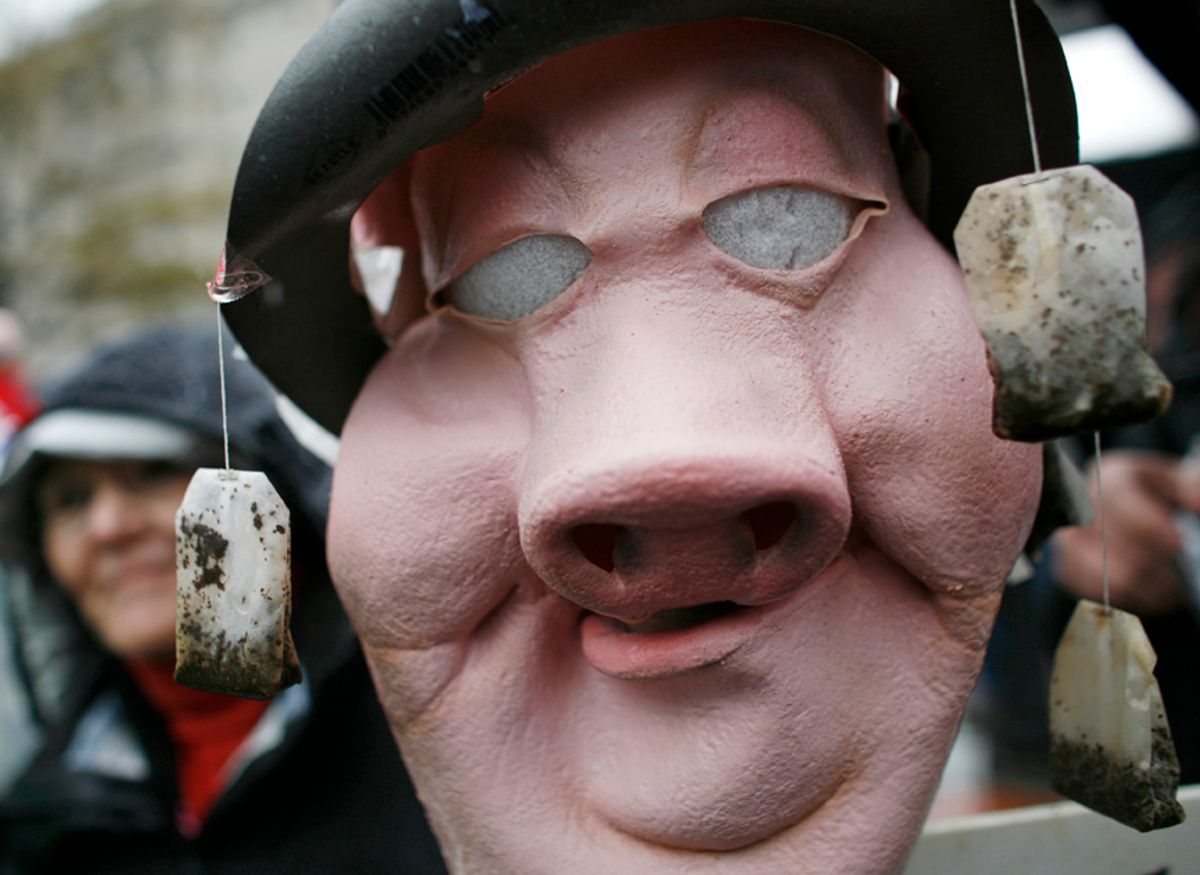 A woman participates in a rally as part of national Tax Day in Lafayette Park across from the White House in Washington, April 15, 2009. The tea bags represent the rebellion of the Boston tea party. REUTERS/Jim Young (UNITED STATES BUSINESS CONFLICT) (Â© Jim Young / Reuters)
--

This originally appeared at RobertReich.org

Even if it’s now on the fringe, the Tea Party won’t be for long. By fueling the Republican surge in the midterm elections, the Tea Party has become the single most powerful force in the GOP. It’s backing at least 14 Senate candidates, both challengers and incumbents, and is playing a significant role in scores of House races. It has already shaken the GOP to its core, defeating establishment Senators Lisa Murkowski in Alaska and Bob Bennett in Utah, and is exerting a strong gravitational pull on many other Republicans, such as Arizona’s John McCain. It will be a force in the run-up to the 2012 presidential election. Presidential aspirant Newt Gingrich has already declared his fealty, and Sarah Palin has become its grande dame.

Beyond fiscal rectitude and less spending, Tea Party candidates are targeting the central institutions of American government. The GOP Senate candidate from Kentucky, Rand Paul, is among several who want to abolish the Federal Reserve. They blame the Fed for creating the Great Recession and believe that the economy would be better off without a single institution in Washington setting monetary policy. Even Maine’s stolid Republican Party, now under Tea Party sway, has called for eliminating the Fed. In a Bloomberg poll a few weeks ago, 60 percent of Tea Party adherents wanted to overhaul or abolish the Fed (compared with 45 percent of all likely voters).

Another Tea Party target is the Internal Revenue Service. South Carolina Sen. Jim DeMint, who has emerged as the Senate’s leading Tea Party incumbent, says that his "main goal in the Senate will not only be to cut taxes, but to get rid of the IRS." Mr. DeMint’s goal is echoed by many Tea Party candidates, including Arkansas Rep. John Boozman, now running for Senate.

At the least, business leaders who complain about uncertainties caused by Mr. Obama’s policies might be concerned. John Castellani, the former head of the Business Roundtable who is now running the Pharmaceutical Research and Manufacturers of America, told Bloomberg Businessweek this month, with remarkable understatement, "This kind of extremism makes it much harder to plan from a business perspective."

GE’s Jeffrey Immelt may be unhappy with President Obama, but he’ll be far unhappier if the Tea Party takes over the GOP. Tom Borelli, director of the Free Enterprise Project of the National Center for Public Policy Research, a conservative think tank and vocal supporter of the Tea Party movement, has demanded Mr. Immelt’s resignation, calling GE an "opportunistic parasite feeding on the expansion of government." Among Mr. Immelt’s alleged sins: taking federal subsidies for clean energy. In a press release last week, the National Center for Public Policy Research stated clearly: "Liberal CEOs are the next target for Tea Party activism."

Presumably, business leaders should also be uncomfortable with the Tea Party’s nativism. At the first national convention of the "Tea Party Nation" last February in Nashville, Tom Tancredo, former Colorado congressman and now Tea-Party-sponsored candidate for governor (as an independent), brought the crowd to its feet by denouncing the "cult of multiculturalism" and accusing immigrants of threatening America’s Judeo-Christian values. "This is our country," he declared to wild cheers. "Take it back!"

More than half of Tea Party backers say they’d be more likely to vote for a candidate who supports changing the 14th Amendment to prevent the children of noncitizens born in the U.S. from automatically becoming citizens. And Tea Partiers strongly support Arizona’s recent immigration law making failure to carrying immigration documents a crime and giving police broad powers to detain anyone suspected of being in the country illegally. "We’re all Arizonans now," says former Alaskan Gov. Sarah Palin.

Many Tea Partiers similarly recoil from global institutions and agreements. Minnesota Representative Michele Bachmann, leader of the House’s Tea Party caucus, calls the Group of 20 summit "one short step" away from "one world government," and suggests America withdraw from international economic organizations. "I don’t want the U.S. to be in a global economy where our economic future is bound to that of Zimbabwe," she says. And a higher proportion of Tea Partiers oppose free trade than does the American population in general. In a recent WSJ/NBC poll, 61 percent of respondents who characterized themselves as Tea Partiers thought trade was bad for America.

Under normal times ideas like these wouldn’t gain much public traction. Why are they now? Because of the continuing effects of the Great Recession. History has shown that people threatened by losses of jobs, wages, homes and savings are easy prey for demagogues who turn those fears into anger directed at major institutions of a society, as well as individuals and minorities who become easy scapegoats -- immigrants, foreign traders, particular religious groups. Were it not for their ongoing economic stresses, Americans wouldn’t be receptive to abolishing the Federal Reserve and the IRS, or believe government and big business were conspiring against them, or turn nativist and isolationist.

Business leaders should be standing up to the Tea Party. And they should be actively supporting policies to relieve the economic stresses that fuel it. Their silence in both regards is not only bad for business; it threatens the stability of our economic and political system.