The silly and sincere extravaganza may have stumbled at times, but it was a triumph of the American spirit 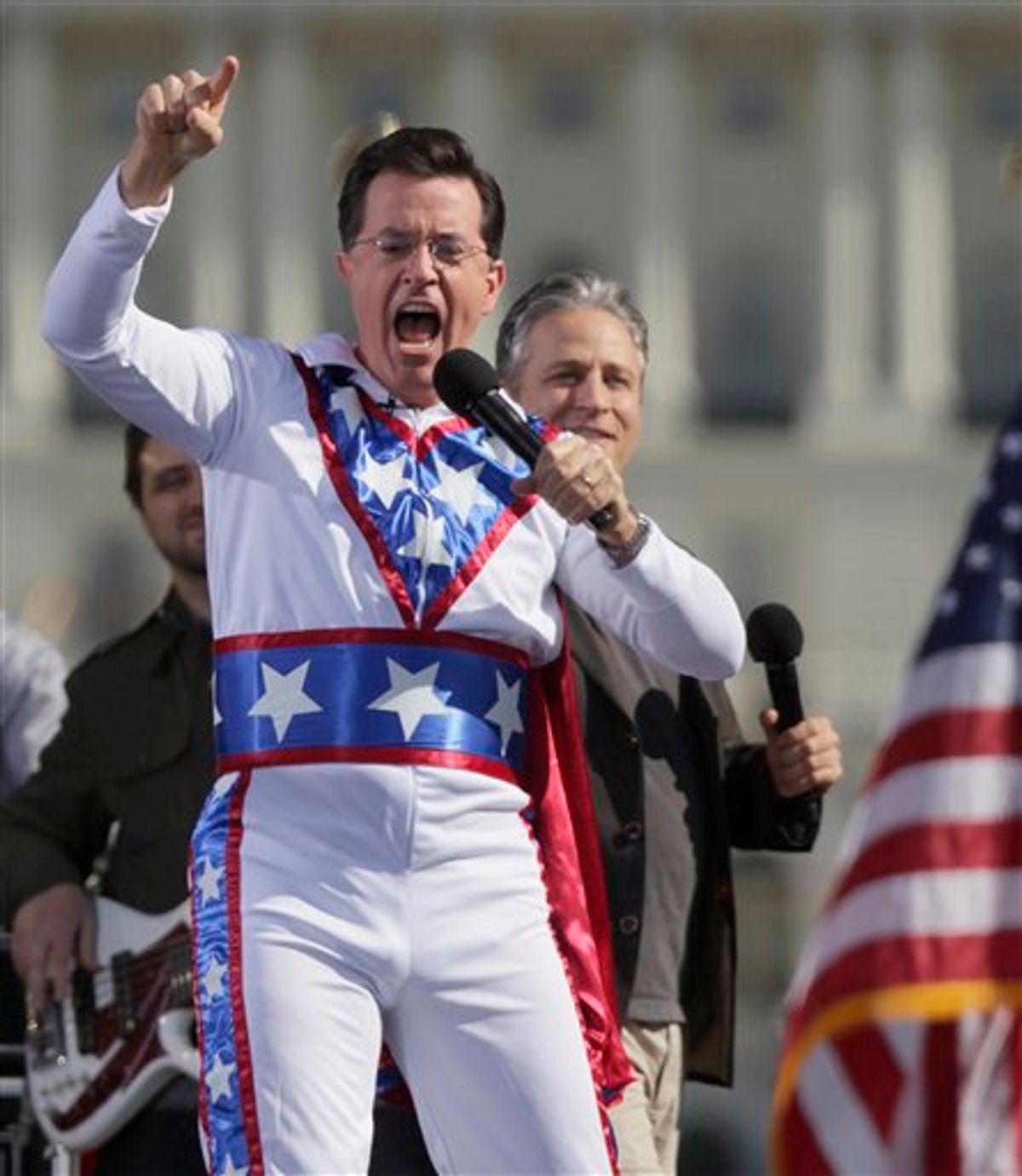 Comedian Stephen Colbert shouts to the crowd during the Rally to Restore Sanity and/or Fear on the National Mall in Washington, Saturday, Oct. 30, 2010. The "sanity" rally blending laughs and political activism drew thousands to the National Mall Saturday, with comedians Jon Stewart and Colbert casting themselves as the unlikely maestros of moderation and civility in polarized times. (AP Photo/Carolyn Kaster) (AP)
--

It wasn't the 1963 March on Washington. Or Woodstock. Or even, thank God, a gathering of Glenn Beck fans. It was a frequently haphazard stage production featuring two comedians, a few musicians and, at various points, Father Guido Sarduccci and R2D2. It was not the beginning of a new political movement or a show of strength for an existing unified cause. Yet in the end, it was just what America needed.

On a flawless autumn afternoon at the nation's capitol, a crowd that "Daily Show" host Jon Stewart fancifully referred to as "10 million" strong came together to declare their allegiance to one nation under reason, good manners, respectful disagreement. What they -- and we the viewers at home -- got was an odd mix of Comedy Central fake news shenanigans and deeply passionate rhetoric. It didn't always work perfectly, but then, the American dream rarely does.

Ever since the Rally to Restore Sanity and/or Fear was announced in September, plenty of people have been mulling what the heck such an event would entail and what it could hope to accomplish. Along the way, many have wondered if Stewart, Colbert and the whole caboodle have essentially jumped the shark.

The answer is no, they haven't. But they have passed the rubicon. They are in a place now where these two jokesters, who've already been powerfully influential in articulating the exasperated sentiment of the courteously silent majority for years, are now officially the faces of Standing for Something. Something That Isn't Totally Bananas.

The show/rally/event itself was an uneven affair, with Comedy Central devoting the first 40 minutes to the quasi warm-up performance by The Roots and John Legend. Sure, everybody loves a sousaphone jam, but as the televised event crept toward the one-hour mark, watches were glanced at, sandwiches were made. And when "Mythbusters" hosts Adam Savage and Jamie Hyneman led world's largest/least-interesting-to-watch-at-home version of the wave, it seemed the thing was spinning its own wheels -- and hard. But then, when they coaxed the crowd into a rousing, synchronized jump, the point of the day began to reveal itself. When we move together, you see, we can literally create a groundswell. Or at least the quantifiable impact of a minor car crash.

A day built around the taking down of notches is not necessarily going to be a day with a high wow factor, and indeed, Jon Stewart's low-key, almost professorial official introduction was no "Are you ready to rock?" Thank heaven, then, for Stephen Colbert. Emerging from a "Fear Bunker" in a tube fit for a trapped miner and chanting, "Chi-le! Chi-le!" Colbert, clad in a patriotic Evil Knievel-esque ensemble, instantly provided the clowny yin and/or yang to Stewart's earnestness. And when he threatened to restore fear to the crowd with the only thing more terrifying than a shoe-brandishing terrorist -- a swarm of peanut-butter-covered bees – it was the long-awaited first belly laugh of the day.

The most spectacularly memorable bit of the event came far too early, but it was still one for the books. It would have been enough had it ended with Stewart bringing out Yusuf, the artist formerly known as Cat Stevens, to lead a lilting rendition of "Peace Train." But the ante upped when Colbert had the audacity to cut him off to trot out Ozzy Osbourne to thoroughly bring it with everyone's favorite ringtone for their designated lunatic, "Crazy Train." But then something truly amazing happened. Stewart cut the action off again, and somewhere in the distance, the sound of "People all over the world …" was heard. It was the O'Jays, a little vocally worse for the wear but bedazzled and funky as ever, to finish off the greatest train-song medley trifecta in recorded history. "Love Train" was a punchline, yes. But if you didn't feel a lump in your throat watching thousands of Americans on the Mall soulfully command us to join hands, then I feel sorry, sorry for you. That sweet, funny moment was what the day was about. My fellow Americans, if we don't have love, we've got zip.

There were other highlights, like famed tantrum throwers Steven Slater and "Real Housewives'" Teresa Giudice in prerecorded messages pleading for good behavior. Stewart and Colbert presented their respective awards for reasonableness and fear-mongering – including Colbert's hilariously disgusted shout-out to the news organizations that banned their employees from attending. "Oh no! People might think NPR is liberal!" he crowed, before handing the prize to a 7-year-old little girl for exhibiting more bravery than the stalwart of the airwaves.

It's no mean feat to pull together a semi-sincere event and a three-hour live telecast, and the Rally was not without its numerous slow moments. Tim Meadows's P. K. Winsome routine was agonizing, most of "The Daily Show's" news team's bantered bits with the crowd felt wildly flat, Kid Rock and Sheryl Crow were uninspired, and if we never hear another Stewart-Colbert duet about the "greatest, strongest country in the world," it will be far too soon.

But when Stewart and Colbert took their podiums for a mock debate, the message began to come back into focus. Stewart astutely pointed out that we can't condemn all Muslims when "There are 1.5 billion Muslims in the world," but the point really resonated when he trotted out beloved basketball legend Kareem Abdul-Jabbar to bring it home. Is Roger Murdock a terrorist? Then shut up, haters. Colbert then mock countered by unleashing a giant, Colbert-shaped "Fearzilla" to unveil a brilliantly terrible montage of mainstream media fearmongering. Suffice to say, the phrase "in YOUR town" featured heavily. Lessons learned from the Rally: Both your flip-flops and your television remote are trying to keeeeeeeell you.

Close to the end, Stewart, ever the more gravitas-endowed, came out alone to do the hardest work of the day – to tell the crowd and the viewers what the hell they were all doing here. Well, sort of. "I'm happy you guys are here," he said, "even if none of us are quite sure why we're here." And he announced, encouragingly enough to be convincing, that "We live in hard times, not end times." It was a welcome reminder of the distinction.

What this crazy, not entirely well-thought out, quasi-free-for-all was about, it turns out, was we, the people. The proud, generous, spirited, non-yelling and non-bullying real Americans who know that "If we amplify everything we hear nothing." Having 4Troops perform the national anthem and Tony Bennet belt out "America, the Beautiful" was not irony. Even Father Guido's rambling benediction that ended with a "Thank you, and we really mean it," was sincere. Because the ultimate metaphor for who we are, in the competent words of Stewart, is our nightmarishly daily, eminently Yankee commute. The NRA members and the Obama voters. The soccer moms and the immigrants. And somehow we all generally merge into one harmonious lane. It's true that as Stewart explained, "Sometimes the light at the end of the tunnel isn't the promised land. It's just New Jersey." But when we practice compassion and community, when we remember that the loudmouths are not a true picture of who we are, we can heal a nation, fly to the moon, and even get to work on time.

Was Saturday the beginning of a new dawn in the American character? Did it cure hysteria, paranoia and rampant jerkwaddery? Only time will tell, but don't hold your breath. Maybe it was nothing more than a comedic stunt. Maybe it was just a helpful reminder to, as one genius sign in the crowd implored, "Make awkward sexual advances, not war." But when Mavis Staples and the entire ensemble gathered for the finale to promise "I'll Take You There," it seemed, at least for a minute, something more. It was a message to the world that we are not the sum of our loudest, angriest parts. That most of our hearts, broken and aching and cynical and flawed though they often are, are in the right place. Oh, mercy. Mercy indeed. And though the rally may be over, the Peace Crazy Love Train is still at the station. The only question left is: Are you on board?