Nearly 10,000 people woke at dawn for a free trip to Jon Stewart's rally. Too bad we got there so late 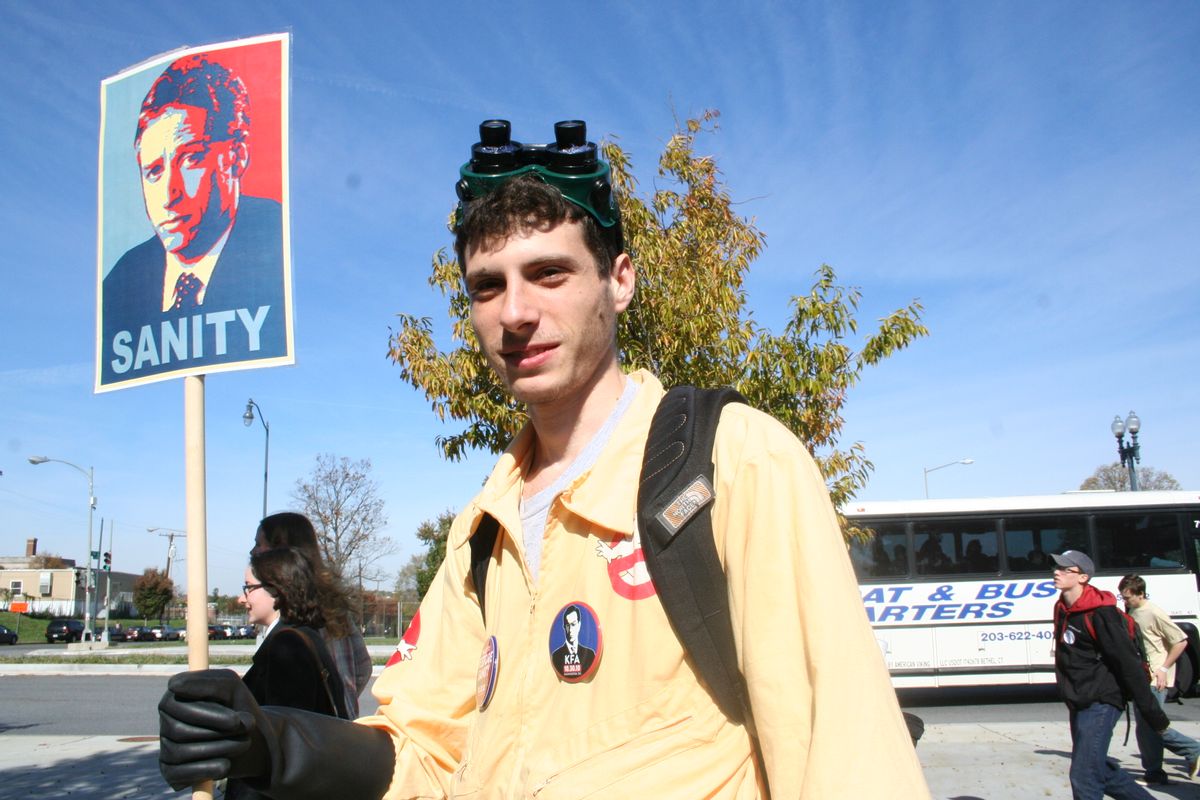 A University of Massachusetts student on the author's bus from New York City to DC to attend the Rally to Restore Sanity.
--

I woke up wanting to smash my iPod. It was 3:50 a.m. and the iPod was playing an ersatz marimba, the first of the four alarms I set to ensure I made it to the far side of Queens to catch the Huffington Post-sponsored bus to the Rally to Restore Sanity in D.C.

Staring at my bleary reflection in the mirror, it was hard to remember why I had signed up for this. My friend Bobby had bailed on the trip the night before. Part of my Halloween costume – "regrettable tattoos" drawn on in Sharpie – had smeared onto my chin. And while the 99-cent pizza place across the street had a line down the block, there was nowhere to get coffee.

This sucks, I thought.

It all began, of course, when Arianna Huffington appeared on "The Daily Show" last month and announced, apparently on impulse, that the Huffington Post was giving away free rides to the Comedy Central-sponsored rally. "Just come to the Huffingtonne Post, 560 Broadway in SoHo. The bahss will be there. We'll take you with us," she said regally, beckoning to the audience. "We have as many bahsses as there are people to fill them." HuffPo staff heard about the gesture at approximately the same time as the rest of us. ("Arianna's $250K Bus to Jon Stewart Rally a 'Shock' at HuffPo HQ," read a headline at The Wrap.)

I could have taken a Chinatown bus or gotten a ride to the rally with friends, but the HuffPo Sanity Bus sounded like an adventure. And it was free.

But you know that old saying about a free ride? Yeah, there’s wisdom there. The trip was something of a bait-and-switch: The buses would not be boarding in trendy downtown SoHo, but at Shea Stadium in Flushing, Queens at 5:30 a.m. -- meaning lefties shlepping from Midtown, like me, would have to leave home by 4:30 a.m., those coming from Brooklyn, 3:30. Some suspected the venue and punishing schedule were designed to whittle down the freeloaders. As my friend Christina put it in her excellent Arianna impression, "We weel leaf from Floshing at five in the mahrning, and that way, all the heepsters will be too hahngover to wake up."

I’ll admit it, that was almost me. But my mood lifted once I got to the subway station. The rally-goers were obvious: They looked like students headed on a field trip, carrying backpacks and provisions and acting giddy. Many of them actually were college kids from New York University, carrying signs that said things like, "THIS IS A SIGN LOL," and on the back, "Follow me on Twitter!"

"Are you going to the rally?" everyone kept asking each other, even though the rally-goers outnumbered the other commuters by about 200 to 1.

"What about you, are you going to the rally?" I asked a well-bundled couple as they stepped onto the train. They were. We commiserated about not being asleep.

"Maybe the Huffington Post will have coffee and donuts," said the boyfriend, who later introduced himself as Tyler.

This was an oft-repeated fantasy, though it turned out to be ridiculous. So did the dreams of gift bags and free yogurt, suggested by Tyler’s girlfriend Megan, and the notions that there would be cheers or sing-a-longs or mandatory consumer surveys. Once the hordes poured out of the train in Queens and congealed into a massive queue around Shea Stadium, it became apparent that the Huffington Post was not prepared to give us anything beyond a bus ride. And even that seemed far from certain.

The Huffington Post itself described the scene as "organized chaos," which was one way to put it; "insufferably frustrating" would be another. Authority figures were scarce, lines doubled back on themselves, and from where I was standing there appeared to be just two people checking thousands of IDs. It was dark, it was 40 degrees, and my cohort had been shuffling forward three steps at a time for two hours before we reached the buses. The bus I boarded left at 7:15, well past the 6:00 a.m. departure advertised.

As a Huffington Poster allocating the leftover single seats on our bus said, "Sorry you can’t sit with your friends. But it’s free. That's a good thing!"

I fell asleep as soon as we started moving but woke up one hour later, as the bus crawled along in traffic in New Jersey. The jam didn’t last long, but it was clear we weren’t going to make it to D.C. in time for the opening of the rally at noon. When our driver unhurriedly pulled into a rest stop to use the bathroom and charge another driver’s phone, no one complained. We hadn’t paid for this, after all. And we wanted Starbucks.

Jon Stewart was already on stage by the time we pulled into the parking lot across from the Navy Yard Metro Station in Southeast D.C. – and we were still three subway stops away from the Mall. I got the news about Stewart via text message and made the mistake of reading it out loud, earning me the ire of the fanboys sitting in front of me who carried a sign with Stewart’s picture and spent the trip quoting the “The Daily Show.”

"Welcome to the Rally to Restore Sanity, from Arianna Huffington!” a HuffPoster said over a bullhorn as we disembarked from the bus. It was 1:10 p.m. and the Metro station we were squeezing into was already packed.

Most riders I talked to were a little miffed. They’d shown up in Queens before dawn and now the Sanity Bus had made them an hour late for a three-hour event. The oversight surely cost Huffington Post some Facebook fans. And it rankled a bit that the headlines on the site – "Huffington Post Sanity Buses bring 10,000 People to DC for Rally” -- contradicted the updates on Twitter, like this one from @robgwilson: "Listening to the Rally For Sanity on the radio while the bus is stuck in traffic. #rally4sanity FTW #huffpost #sanitybus FAIL" and this one from @abbyohlheiser at 2 p.m.: "#sanitybus was insanely late. just arriving at rally now."

"Our driver got lost,” one rider vented to me as we speed-walked to the train. "I was using the GPS on my phone to give him directions.”

As I headed down Independence, I heard someone behind me griping about arriving late. I turned around and discovered Tyler and Megan from my morning train. Their driver, who claimed it was his first day driving a bus, had missed an exit twice after driving through the middle of a three-car accident early in the trip.

"I actually wish we had gotten in a little fender-bender," Tyler said. "Then we'd still be in New York."

Just then I heard a roar of applause, so I said goodbye to Megan and Tyler and picked up my pace. "Enjoy your 12 minutes in DC!" Tyler called.

The crowd was thick and nobody with a view was willing to give up a spot. Kid Rock and Sheryl Crow had apparently just taken the stage for a duet I could hardly hear, so I gave up and started walking around – there was plenty to look at between the Halloween costumes and the signs ("I have an opinion about our nation's progress and I would like to discuss that with you civilly," "i like cats," and of course, "LEGALIZE IT"). And despite the long wait at the Porta Potties, people were in a good mood. They said sorry when they bumped into you.

I was in a good mood, too, even though I basically missed the rally after traveling for more than eight hours. All the grumbling I heard was in line with the rally's theme – "keep calm and carry on" – and much of it was borderline good-natured. To be fair, 80 buses had left before I boarded mine, so there must have been some rally goers who arrived at the National Mall on time. In the end, a relatively expedient shuttle took people to our nation’s capital to enjoy the fringes of an exciting rally, and returned those people to New York City in time for an early Halloween celebration on Saturday night.

Adrianne Jeffries is a freelance reporter based in New York City. Follow her on Twitter at @ADRjeffries.