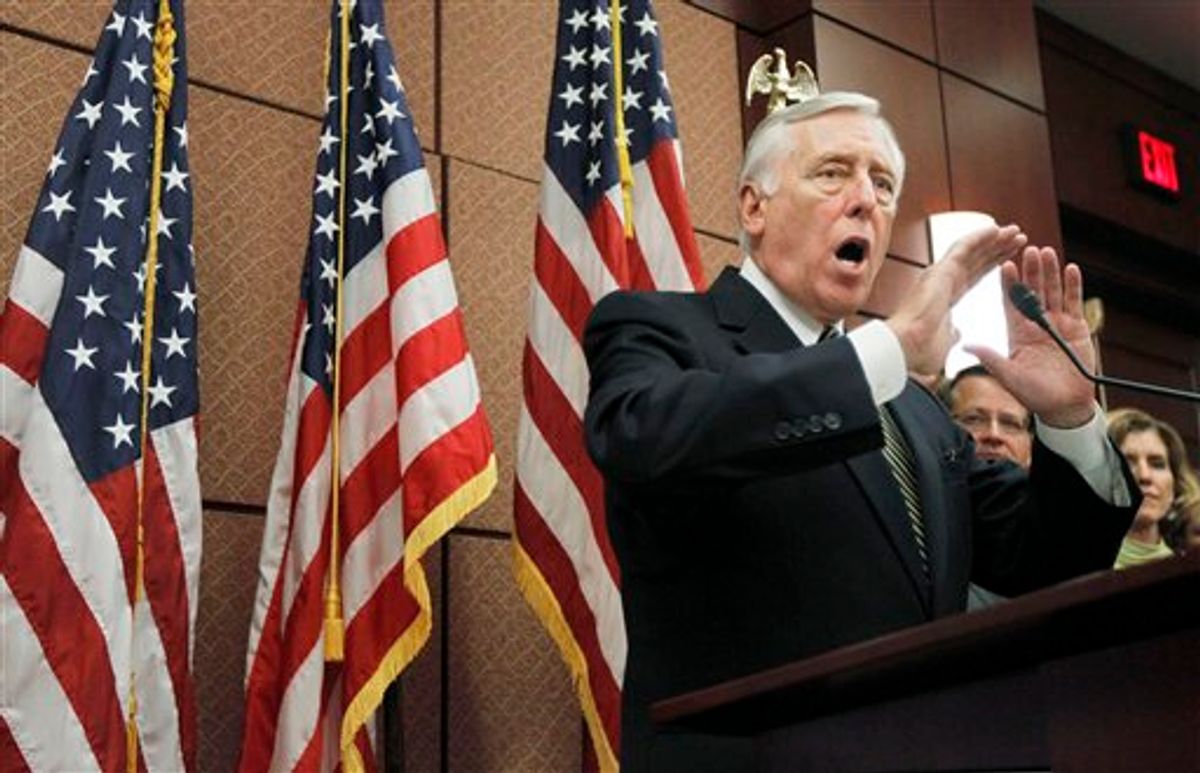 The man who is odds-on to be the leader of House Democrats before the week is out is trying to walk a fine line.

Within Washington, it is widely expected that 71-year-old Steny Hoyer, currently the second-ranking House Democrat, will succeed Nancy Pelosi as the party’s leader if Democrats lose control of the chamber on Tuesday (although there is talk that he may face a challenge, perhaps from Connecticut’s John Larson). But during an interview with Salon on Sunday, Hoyer was adamant that Democrats would hold on to the House, and he affably refused to answer questions on his possible ascension.

"I don’t wish to get into the hypothetical," Hoyer, now the majority leader, said. "I think the Democratic leadership will continue as it is."

Even so, a certain degree of positioning on the Maryland congressman’s part could be detected between the lines.

In the event of a Pelosi abdication, one of the challenges that will confront Hoyer will be how to win the approval of a Democratic caucus that will almost certainly have been shorn of many centrist members who would otherwise be his natural supporters. Hoyer is clearly not running from his moderate image.

Discussing the importance of bringing a greater level of civility to politics, he said, "I like to think that is the way I conduct myself. I think if you talk to Republicans in the House of Representatives, many of them would agree that’s an accurate characterization. I think it sets a tone for working together. But it takes two to tango."

It is equally obvious, however, that Hoyer doesn’t want to be seen as a pushover by his more liberal colleagues. His offer of bipartisan cooperation came hand-in-hand with a gloomy assessment of the sincerity of similar remarks emanating from Republicans.

"I hold out hope for bipartisan agreement and the ability to work together in a bipartisan fashion," he said. "But experience tells me over the past two years -- and frankly for years before that -- that there is little inclination on the part of the Republican Party to do that. And we have some really specific examples of where the Republican Party has rejected its candidates that have done that."

Into this category, Hoyer placed Bob Bennett, the senator from Utah who was defeated at a party convention earlier this year, and Delaware’s Mike Castle, who famously lost his party’s Senate nomination in the face of a Tea Party-inspired challenge from Christine O’Donnell.

Hoyer was scarcely any kinder about John Boehner, who is virtually certain to become House Speaker if Republicas win the chamber this week.

Asserting that Boehner "refers many times" to his work on the No Child Left Behind education law as an example of good-faith bipartisanship, Hoyer noted that the Ohio Republican reached across the aisle on that occasion only "when there was a Republican president asking him to do so."

He continued: "You are hard-pressed, I think, to point to an example of John Boehner cooperating with a Democratic president, whether it was Bill Clinton or Barack Obama. There has not been a lot of bipartisan cooperation coming from Mr. Boehner. He says he is prepared to do that. I don’t know if he means it."

Hoyer’s stoic insistence that the Democratic House majority would be preserved inevitably rendered many questions about how his party would act in the event of a GOP takeover out-of-bounds.

Asked about the widely reported tensions between the camps of Boehner and Eric Cantor, the GOP’s No. 2 House leader, Hoyer noted merely that "to the extent that there is not a united front among the Republican leadership, that will additionally complicate [Boehner’s] objective – if, in fact, his objective is to try to mold together some bipartisan cooperation." But he immediately added that, "Again, I don’t think he is going to be in the majority."

Hoyer stuck close to his party’s talking points, both in terms of the election and its possible aftermath. He bemoaned the "unbelievably large amounts of money being spent by anonymous groups" against his party’s candidates. And he asserted that "We’ve got to keep our focus on job creation. That is clearly the number one concern in the country. Whatever happens in the election, I think that needs to be Congress’s focus, and that’s what I think we will pursue."

Earlier this summer, Hoyer excoriated comic Stephen Colbert for his testimony, delivered in his Comedy Central character, before a House subcommittee on immigration, terming it “an embarrassment.”

But asked about Saturday’s Washington rally headlined by Colbert and Jon Stewart, Hoyer was full of praise. While he noted that he had only heard second-hand reports, he said he viewed the rally as "a very positive effort by both Colbert and Stewart to bring people together."

He added: "I think that’s what we should be doing -- talking in civil terms of the real challenges confronting our country, and not in terms of confrontation and division."

Whether Hoyer’s message of comity will resonate with liberals on Capitol Hill and beyond in the coming weeks is very much an open question.