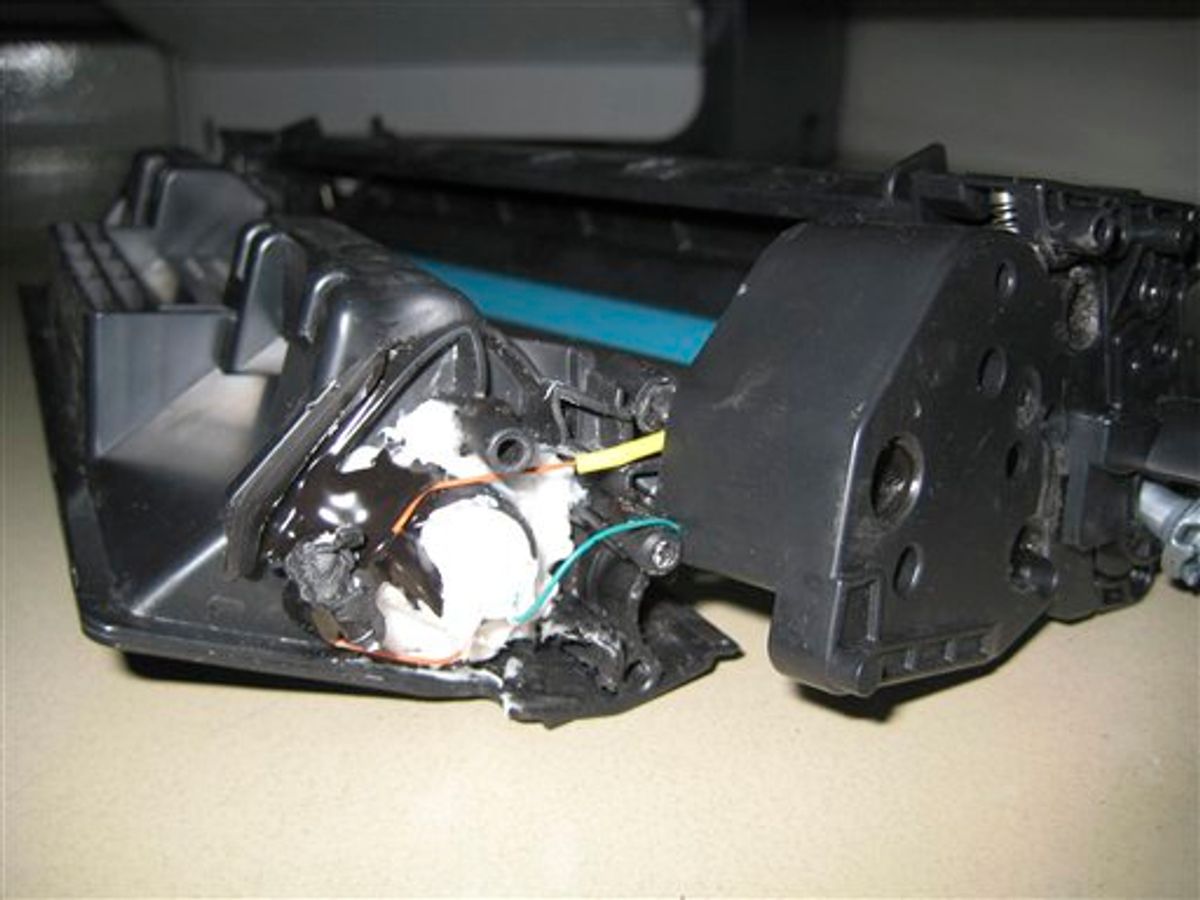 This undated photo released by the Dubai Police via the state Emirates News Agency (WAM) on Saturday, Oct. 30, 2010, claims to show parts of a computer printer with explosives loaded into its toner cartridge found in a package onboard a cargo plane coming from Yemen, in Dubai, United Arab Emirates. Dubai police say the bomb, discovered in the ink cartridge of a computer printer in a shipment of air cargo from Yemen bound for the United States, contained the powerful explosive PETN and bore the hallmarks of al-Qaida. (AP Photo/Dubai Police via Emirates News Agency) EDITORIAL USE ONLY, NO SALES (AP)
--

Here we go again. Another apparent terror plot involving commercial planes, this time with a shipment of explosives from Yemen via air freight.

What are the lessons here?

In the days ahead we'll be hearing a lot about the need for improved security screening of air cargo. And while maybe there is such a need, there is also the need to acknowledge that it is impossible to protect ourselves, and our planes, from every conceivable means of attack. We are free to turn our airports into fortresses if we choose. No matter, there will always remain a way for a resourceful and determined enough perpetrator to skirt whatever safeguards we put in place.

The explosive cartridges discovered in Dubai and England were so sophisticated, and so cleverly designed, that investigators described them as "undetectable." Scary, but is that really surprising? Are we dumb enough to believe that by enacting ever more draconian, minutiae-obsessed security measures, we can eventually reach a point of "total safety"?

Think for a minute about the typical Transportation Security Administration airport checkpoint. We spend billions of dollars and billions of hours every year, rifling through carry-on bags in a hunt for hobby knives and corkscrews, confiscating cutlery from pilots,  and so on. Yet even a small child is bright enough to understand that you can fashion a makeshift and perfectly deadly knife from almost anything. You don't need to smuggle it aboard; you can make it on the plane from a snapped-off piece of metal, plastic, glass or wood. Talk to a prison guard. (Of course, the suicide hijack scheme used by the Sept. 11 cabal is no longer viable, and such a knife wouldn't be of use to a terrorist in the first place, but that's another issue.)

We can extend this thinking to the search for explosives. Granted, bombs are the No. 1 threat to commercial planes, and have been for decades. We've made large strides in detecting them, and together, the right technology and the right protocols give us greater protection and provide a highly effective deterrent. But only to a point.

That's not capitulation, it's reality, and a mind-set that in the long run could save us immeasurable amounts of money and undue panic if and when something terrible happens.

As it has happened before. One Associated Press story described last week's plot as "the latest to expose persistent security gaps in international air travel and cargo shipping nearly a decade after the Sept. 11, 2001, attacks." I would back that up to about 1970. Again we are fed this weird idea that air crimes did not exist, or somehow weren't important, before the 2001 attacks on New York City and Washington. In fact, bombings and hijackings were comparatively rife  throughout the 1970s, 1980s and 1990s, and only since 2001 have things calmed down.

We've been lucky, but obviously, too, we're doing something right. And whatever that something right is, I suspect it is going on far out of view, in the secret world of intelligence gathering and international policing. Where it should be. The devices in Dubai and England were found thanks to a tip-off. Indeed, ultimately this isn't a hunt for weapons; it's about a hunt for those criminals and terrorists who would use such weapons, and the most effective way of thwarting an attack is to catch it in the earliest possible stage, before the terrorist has a chance to set his plan into motion.

This one, similar to last year's Christmas Day "underwear bomb," was a little too close for comfort. It's a wake-up call, perhaps: a reminder to stop fussing around with butter knives and Ziploc bags and get our priorities straight. We will never be totally safe, which is Lesson 1. But Lesson 2 is to strive to be as safe as we reasonably can be. And no, we're not there yet. We're not there because too much of what we do in the name of security isn't about security at all. This self-defeating approach has cost us plenty of money and time. Sooner or later we'll be measuring the cost in lives.