Team last won the World Series in 1954, when club was based in New York 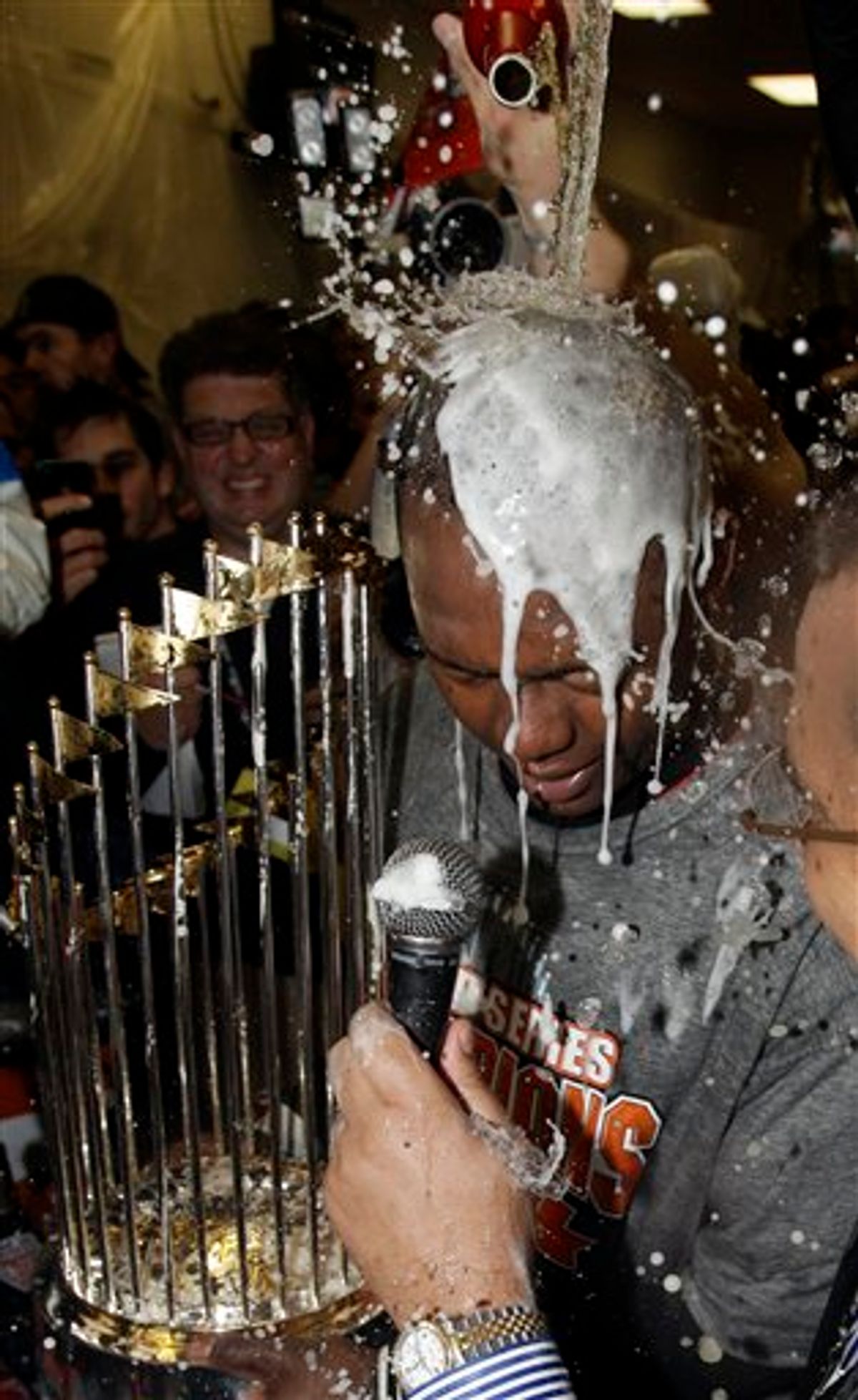 Thousands of orange and black-clad Giants fans hugged and high-fived one other Monday night as the club clinched its first World Series title since moving west more than a half century ago.

As the final out of the 3-1 win was recorded, the thousands watching on a big-screen TV at San Francisco's Civic Center plaza leapt for joy as City Hall glowed bright orange in the background.

"I have a permanent smile on my face," said Valerie Nicklas of Berkeley, who partied at another large street gathering near the Giants' AT&T Park. "This makes all the years of suffering worth it."

Fans waving Giants flags and rally towels danced in the downtown streets near the Civic Center as car horns blared. A lone accordion player played a tune as fans swirled around him. Others surrounded a drum corps as it pounded out a rhythm.

Amy Anderson Giugliano shot a bottle of champagne into the air, dousing those nearby.

"I never thought this would happen!" the 42-year-old from San Carlos said. "I'm going to celebrate all night!"

That last defeat to the Los Angeles Angels has been fresh in Jun Lee's mind, but he still chose to drive in from Benicia with his wife so that their 16-month-old son could witness the celebration from his stroller.

Almost an hour after the win, fans were jumping up and down in unison and screaming "ooooh-REE-BAY" -- a popular chant at games to honor third baseman Juan Uribe.

Traffic was slowed in the city's Castro district as people flooded out of bars, restaurants and homes. The neighboring Mission district was also jammed.

Fans also blocked traffic near the Giants' ballpark as they made their way toward Willie Mays Plaza, where a statue of the legendary outfielder stands prominently outside the stadium's gates.

"This is a long time coming," said Jason Scully of San Francisco. "They're a great team -- all the castoffs and misfits truly represent this city."

Mayor Gavin Newsom announced the public viewing at the Civic Center after the Giants' 4-0 shutout victory over the Texas Rangers Sunday put them on the verge of clinching the championship.

Officials quickly scheduled a ticker-tape parade for Wednesday at 11 a.m. through the city's financial district. In a statement, Newsom congratulated the club and thanked them for bringing the city together.