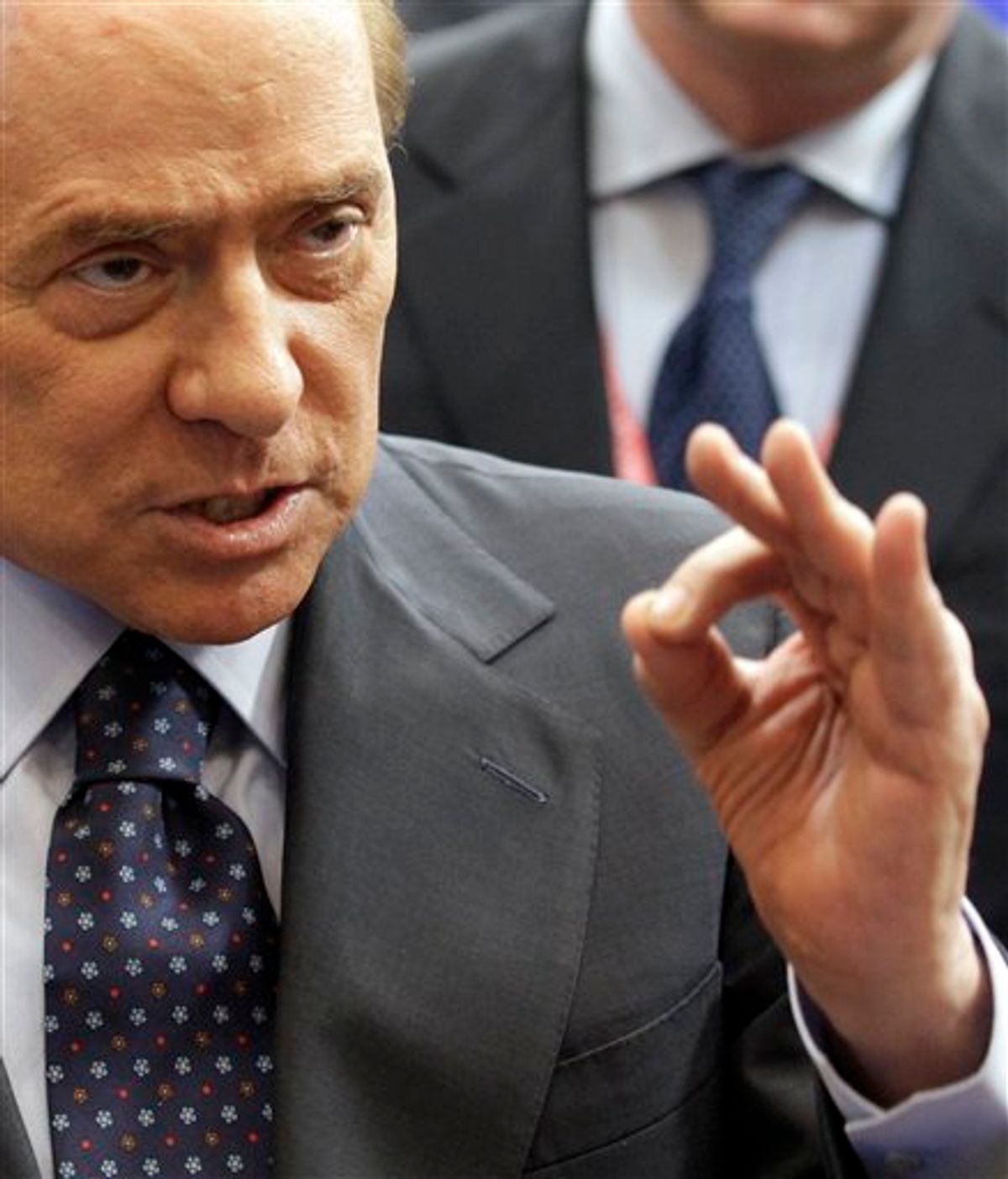 Silvio Berlusconi, Italy's pervy prime minister, is experiencing lady troubles once again. This time, he is alleged to have had an inappropriate relationship with a 17-year-old girl whom he also happens to have sprung from jail on theft charges. It doesn't stop there, though -- it never does with Berlusconi! In a characteristically daft attempt at damage control, the 73-year-old declared Tuesday that, well, it's "better to be passionate about a beautiful girl than a gay." Lest you forget about his past problems with women, I've taken it upon myself to compile a list of Berlusconi's greatest (and by greatest, I meant worst) hits.

10. At an event earlier this fall, Berlusconi advised driven young women to just marry for money.

9. In 2008, he deemed the cabinet of Spanish President Jose Luis Rodriguez Zapatero as "too pink" -- because half the positions were filled by women.

8. While touring the earthquake-devastated region of Abruzzo, Berlusconi asked female councilor Lia Giovanzzi Beltrami, "Can I fondle you?"

7. At an awards dinner, Berlusconi reportedly told former showgirl Mara Carfagna, "If I wasn't already married, I would marry you right away." Fun irony-filled fact: He later appointed her minister for Equal Opportunities.

6. Berlusconi declared that right-wing female politicians are "more beautiful" than the left's ladies.

5. On state television he told Rosy Bindi, vice president of the Chamber of Deputies, that she was "always more beautiful than intelligent," which many interpreted to mean that she was especially unintelligent.

4. Last year, it emerged that Berlusconi had attended an 18-year-old beauty's birthday party, which caused his wife, Veronica Lario, to file for divorce. Then a prostitute came forward to claim that she had serviced the prime minister.

3. In the wake of a series of high-profile rapes, he rejected calls for a greater police presence: "We can't think of deploying a large force. We would have to send as many soldiers as there are beautiful girls. And I don't think we would manage." When that statement drew ire, he dug himself deeper still, explaining that he was merely delivering "a compliment to pretty Italian girls, of which there are millions." Rape is a compliment, got that?

2. I said it above and I'll say it again: He defended himself against his latest sex scandal by reminding everyone that he is not only a womanizer (or, more accurately, an underage-girlizer) but also a homophobe, saying that it's "better to be passionate about a beautiful girl than a gay."

1. That sex scandal dates back to May, when he demanded the release of a 17-year-old Moroccan girl being held on theft charges in a Milan jail. She later claimed that she had attended parties at Berlusconi's villa, where she says "group sex games," as the Telegraph puts it, took place.