"Dancing with the Stars" recap: Jennifer Grey is back on top 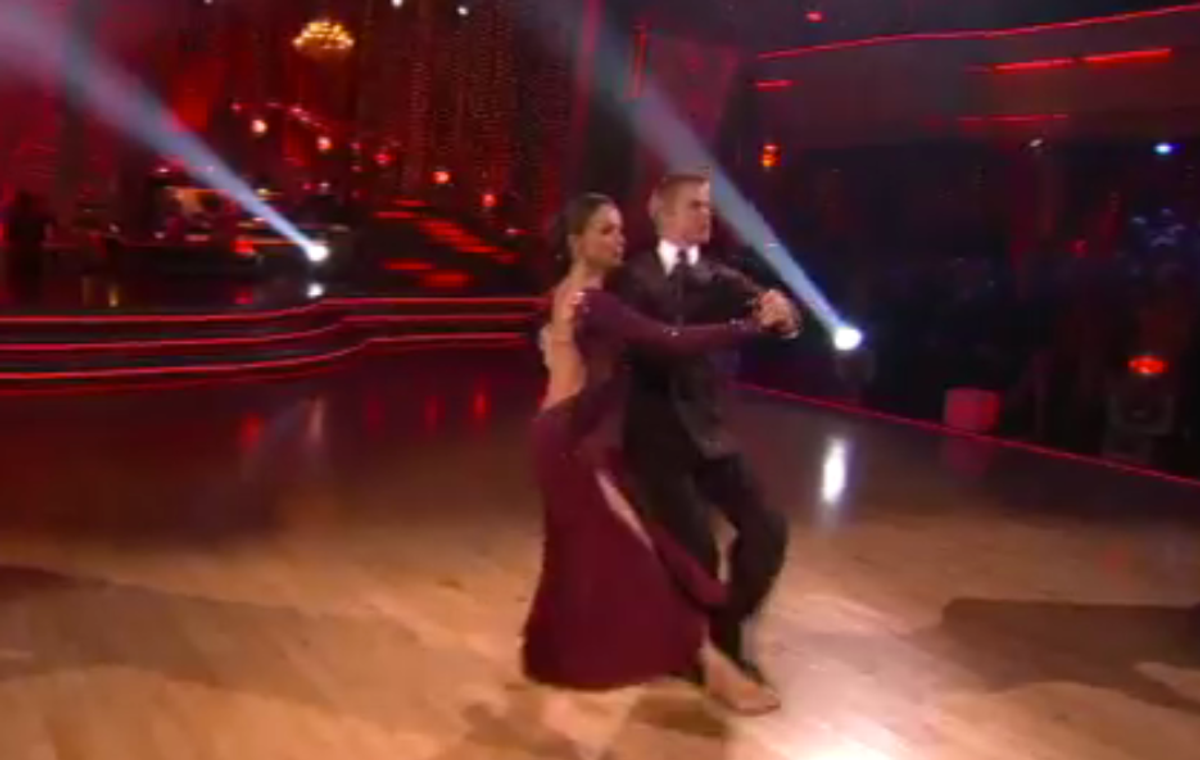 Jennifer Grey performs during last night's "Dancing With the Stars"
--

You can say what you want about Audrina -- and I certainly have over the past few weeks -- but even during the most stressful and upsetting of times she conducted herself with grace, poise and elegance. After her elimination last week, she dined with her mother at an L.A. restaurant to quietly discuss her future plans and pay homage to a show that provided her with the platform to share her talents with tens of millions of people. Her mother, visibly humbled by her daughter's good fortune, took the opportunity to thank the "Dancing with the Stars" family by addressing reporters who had gathered outside:

"Audrina is going to [expletive] rise. She's got class," said the elder Patridge, "You know why? She's a Polish, Catholic, [expletive] full-on Italian."

At this point, reports claim she took a dainty sip from her club soda and lemon before continuing.

"I've had it. I've been a celebrity mom eight years through this Hills bullshit, but Audrina's going to the next level, baby. [Expletive] "Hills" girls -- "Hills" tramps! My baby's a star!"

Clearly moved, the reporters -- in a rare act of respect and deference -- placed their cameras on the ground and gave Lynn a round of applause that escalated to a crescendo as she closed out her remarks by graciously acknowledging her daughter's co-stars.

"She's the only one that had some class and I don't give a [expletive] about it."

It was team dance week, with performers from previous seasons acting as "team captains" for the first performances.

Kristi Yamaguchi's team of Rick, Bristol and Kyle took on Apolo Ohno's team made up of Jennifer, Brandy and Kurt. They all choreographed and danced a routine together and were scored collectively.

Their collective scores were added to their individual scores to give them an all-around final score.

When all was said and done, the heavily favored Apolo team came out ahead.

Kyle and Lacey had to recreate an iconic paso doble from Mel B. and Maks -- a dance that made the list of top ten viewer favorites last week. Kyle seems to be riding the wave of momentum and disappointments perfectly -- somehow avoiding the pressure of frontrunner status while remaining a favorite who may now be perceived as a dark horse. Each week he seems to shed a little more of the cutesy kitsch (along with some pounds) while remaining playful enough to be a potential viewer favorite. A tricky balance.

Kyle wore his best stink face for the performance and hit all the right notes. His biggest challenge has always been integrating in more of the technique with his natural performance ability -- and whereas some weeks he's favored one over the other, this week he seems to have found the winning combination. Assuming viewers can stomach the occasional cringe-worthy mugging for the camera, he should be a strong contender for the top 4.

Kurt and Anna recreated an Emmit Smith tango from Season 3. No matter what dance Kurt takes on, his apparent need to do it right -- as in there is only one way, one truth and one life -- gets in the way of his ability to pull it off. So, the judges are left with "it's getting better" -- the default compliment for those who have little hope. As Len suggested, Kurt needs to figure out the difference between "flex knees" and "bent knees" -- which I assume is referring to the fact that he constantly looks like he's ducking under a bridge as he moves. Emmit, who served as guest judge for Kurt, also pointed out that his sticking-out chicken neck is the result of years of football training -- a stance meant to protect his body on the field -- which helps in understanding why he appears to be in a rush to get to the men's room during every dance.

"Does the fact that your fellow NFL stars have done so well put added pressure on you?" asked Brooke in his post-dance interview.

"Oh definitely. They've all been great athletes -- and I'm the slow, old, white guy -- so hopefully I can hold my own," he said to audible gasps in the studio and a confused look from the young, fast, black Emmit.

Bristol and Mark reinterpreted Kelly Osbourne's Viennese Waltz -- a producer-inspired decision to make sure the level of difficulty wasn't beyond Bristol's limited abilities. "She's got such heart," said Kelly in the pre-interview -- the competition show equivalent of "You have such a pretty face." Like Kurt, there is no way that Bristol can last much longer on the show so she needs to collect as many platitudes as possible to mitigate the "your dancing sucks" subtext.

Once again, she strolled through the routine with one mantra ringing in her head -- "don't look stupid" -- which of course translates into "don't do anything risky."  And once again, the judges mentioned how "endearing" she was -- as if it was relevant.

"This is a dance competition where the revealing of who you are needs to lead the way," says Rick who performed a Helio Castroneves quickstep. As to whether that was a good thing or not was a little up in the air at the beginning of the dance as his Jim Carrey contortions were one lithium pill away from psychotic. But in a season where "deadpan" fights "frantic" for a primary emotion, his uninhibited performance was a breath of fresh air. He's quickly emerging as one of the more likable -- and genuine -- of the remaining contestants.

Brandy somehow had to perform a sensual foxtrot with steamy Maks -- as originally done by "Sex and the City" sex beast Gilles Marini -- without having had much to inspire her in the past six years. Or maybe since the revelation that she hasn't been on a "date" in that long things have picked up -- because her foxtrot stole the show.

Brandy wants to win. Every week, she has upped her game -- thriving under the pressure as others crumble beneath it. In previous weeks her moves looked a little disjointed as if she was connecting the dots to a puzzle. This week, no seams were showing -- just pure performance.

Jennifer and Derek danced a Drew Lachey Season 2 Tango -- the most popular viewer dance of all time.

Jennifer's 50 year old body is tired. And girlfriend is working it hard. It's easy to forget how old Jennifer is -- she looks ten years younger -- but during rehearsal it didn't seem like her body was going to cooperate and as a viewer we're constantly left wondering if this is going to be the day it finally gives out.

Not this week. She skyrocketed back up the leader board with a near perfect tango -- once again emerging as a top contender for the trophy. Instead of leading the way, though, she may be chasing Brandy for it -- something nobody could have predicted a few weeks ago.

Dancing With The Stars In Treatment Television