Better yet, DON'T write that novel 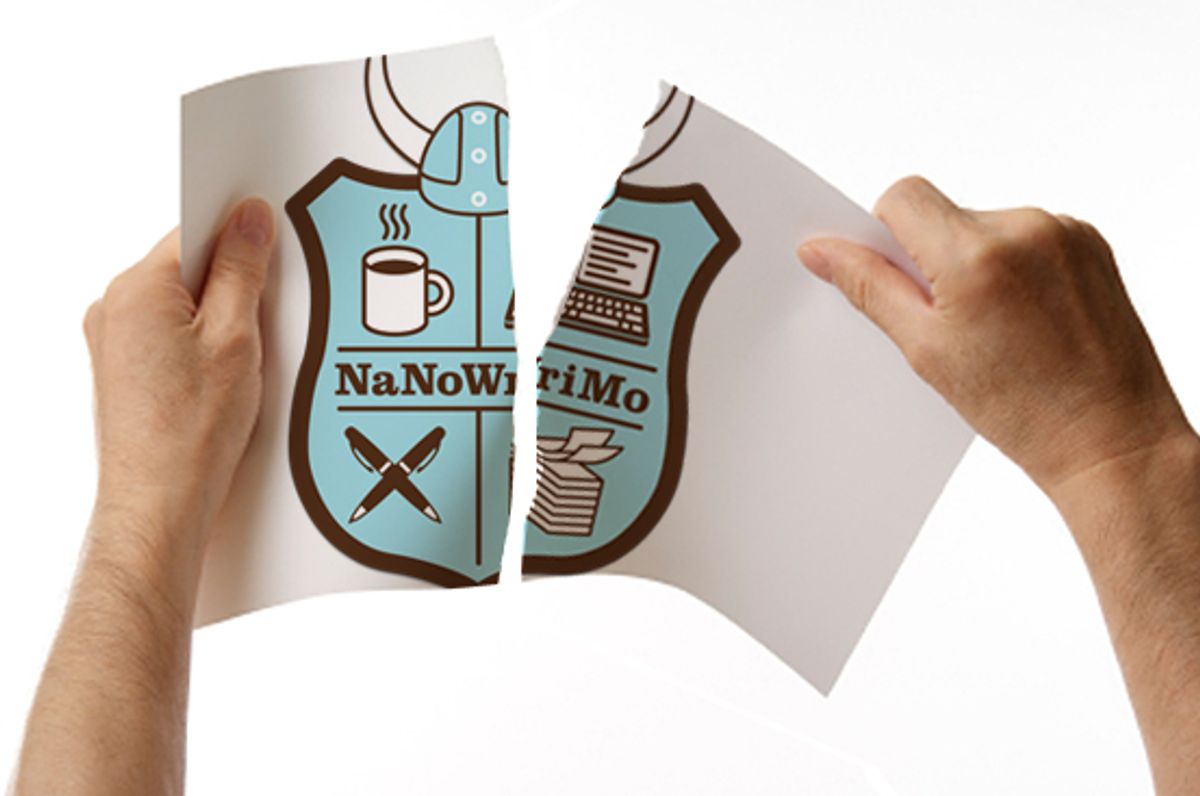 For me, the end of October is always slightly tinged with dread -- provoked not by Halloween spooks, not even by election season, but by the advent of something called NaNoWriMo. If those syllables are nothing but babble to you, then I salute you. They stand for National Novel Writing Month.

NaNoWriMo was started back in 1999 as a motivational stunt for a small group of writer friends. It's since become a nonprofit organization with staff, sponsors, a fundraising gala and, last year, nearly 120,000 contestants. Participants agree to start and complete a novel of 50,000 words or more during the month of November. To "win," all you have do is meet that goal, however wretched the result. Last year's NaNoWriMo had 21,683 such winners.

The purpose of NaNoWriMo seems laudable enough. Above all, it fosters the habit of writing every single day, the closest thing to a universally prescribed strategy for eventually producing a book. NaNoWriMo spurs aspiring authors to conquer their inner critics and blow past blocks. Only by producing really, really bad first drafts can many writers move on to the practice that results in decent work: revision.

In that spirit, NaNoWriMo has spawned countless tutorials, tip lists, FAQs, wikis and Twitter feeds, all designed to cheer the contestants on to their own personal finish line. (It's no coincidence that the event is scheduled for marathon season.) "Make no mistake," the organization's website counsels. "You will be writing a lot of crap. And that's a good thing. By forcing yourself to write so intensely, you are giving yourself permission to make mistakes. To forgo the endless tweaking and editing and just create."

I am not the first person to point out that "writing a lot of crap" doesn't sound like a particularly fruitful way to spend an entire month, even if it is November. And from rumblings in the Twitterverse, it's clear that NaNoWriMo winners frequently ignore official advice about the importance of revision; editors and agents are already flinching in anticipation of the slapdash manuscripts they'll shortly receive. "Submitting novels in Nov or Dec?" tweeted one, "Leave NaNoWriMo out of the cover letter ... or make it clear that it was LAST year's NaNo." Another wrote, "Worst queries I ever received as an agent always started with 'I've just finished writing my NaNoWriMo novel and ...'"

As someone who doesn't write novels, but does read rather a lot of them, I share their trepidation. Why does giving yourself permission to write a lot of crap so often seem to segue into the insistence that other people read it? Nothing about NaNoWriMo suggests that it's likely to produce more novels I'd want to read. (That said, it has generated one hit, and a big one: "Water for Elephants" by Sara Gruen, who apparently took the part about revision to heart.) The last thing the world needs is more bad books. But even if every one of these 30-day novelists prudently slipped his or her manuscript into a drawer, all the time, energy and resources that go into the enterprise strike me as misplaced.

Here's why: NaNoWriMo is an event geared entirely toward writers, which means it's largely unnecessary. When I recently stumbled across a list of promotional ideas for bookstores seeking to jump on the bandwagon, true dismay set in. "Write Your Novel Here" was the suggested motto for an in-store NaNoWriMo event. It was yet another depressing sign that the cultural spaces once dedicated to the selfless art of reading are being taken over by the narcissistic commerce of writing.

I say "commerce" because far more money can be made out of people who want to write novels than out of people who want to read them. And an astonishing number of individuals who want to do the former will confess to never doing the latter. "People would come up to me at parties," author Ann Bauer recently told me, "and say, 'I've been thinking of writing a book. Tell me what you think of this ...' And I'd (eventually) divert the conversation by asking what they read ... Now, the 'What do you read?' question is inevitably answered, 'Oh, I don't have time to read. I'm just concentrating on my writing.'"

In an essay for the Atlantic earlier this year, the fine short story writer Richard Bausch describes meeting a couple who edited a struggling literary magazine and funded it by publishing a never-ending stream of how-to manuals for would-be writers. The wife offered him $10,000 on the spot to write one himself. "These kinds of books sell better than the fiction books," she explained.

Frankly, there are already more than enough novels out there -- more than those of us who still read novels could ever get around to poking our noses into, even when it's our job to do so. This is not to say that I don't hope that more novels will be written, particularly by the two dozen-odd authors whose new books I invariably snatch up with a suppressed squeal of excitement. (Actually, there are more of those novels than I'll ever be able to read, as well.) Furthermore, I know that there are still undiscovered or unpublished authors out there whose work I will love if I ever manage to find it. But I'm confident those novels would still get written even if NaNoWriMo should vanish from the earth.

Yet while there's no shortage of good novels out there, there is a shortage of readers for these books. Even authors who achieve what probably seems like Nirvana to the average NaNoWriMo participant -- publication by a major house -- will, for the most part, soon learn this dispiriting truth: Hardly anyone will read their books and next to no one will buy them.

So I'm not worried about all the books that won't get written if a hundred thousand people with a nagging but unfulfilled ambition to Be a Writer lack the necessary motivation to get the job done. I see no reason to cheer them on. Writers are, in fact, hellishly persistent; they will go on writing despite overwhelming evidence of public indifference and (in many cases) of their own lack of ability or anything especially interesting to say. Writers have a reputation for being tormented by their lot, probably because they're always moaning so loudly about how hard it is, but it's the readers who are fragile, a truly endangered species. They don't make a big stink about how underappreciated they are; like Tinkerbell or any other disbelieved-in fairy, they just fade away.

Rather than squandering our applause on writers -- who, let's face it, will keep on pounding the keyboards whether we support them or not -- why not direct more attention, more pep talks, more nonprofit booster groups, more benefit galas and more huzzahs to readers? Why not celebrate them more heartily? They are the bedrock on which any literary culture must be built. After all, there's not much glory in finally writing that novel if it turns out there's no one left to read it.

Consider turning away from the self-aggrandizing frenzy of NaNoWriMo and embracing the quieter triumph of Kalen Landow and Melissa Klug's "10/10/10" challenge: These two women read 10 books in 10 categories between Jan. 1 and Oct. 10, focusing on genres outside their habitual favorites. In her victory-lap blog post, Klug writes of discovering new favorite authors she might otherwise never have encountered, and of her sadness on being reminded that "most Americans don't read ANY books in a given year, or just one or two." Instead of locking herself up in a room to crank out 50,000 words of crap, she learned new things and "expanded my reading world." So let me be the first to say it: Melissa and Kalen, you are the heroes.

Richard Bausch on the boom in how-to books for writers

Publishers Weekly on how independent bookstores can participate in NaNoWriMo