Put away the jack-o'-lanterns and spookiness, and curl up with this incredibly comforting dish 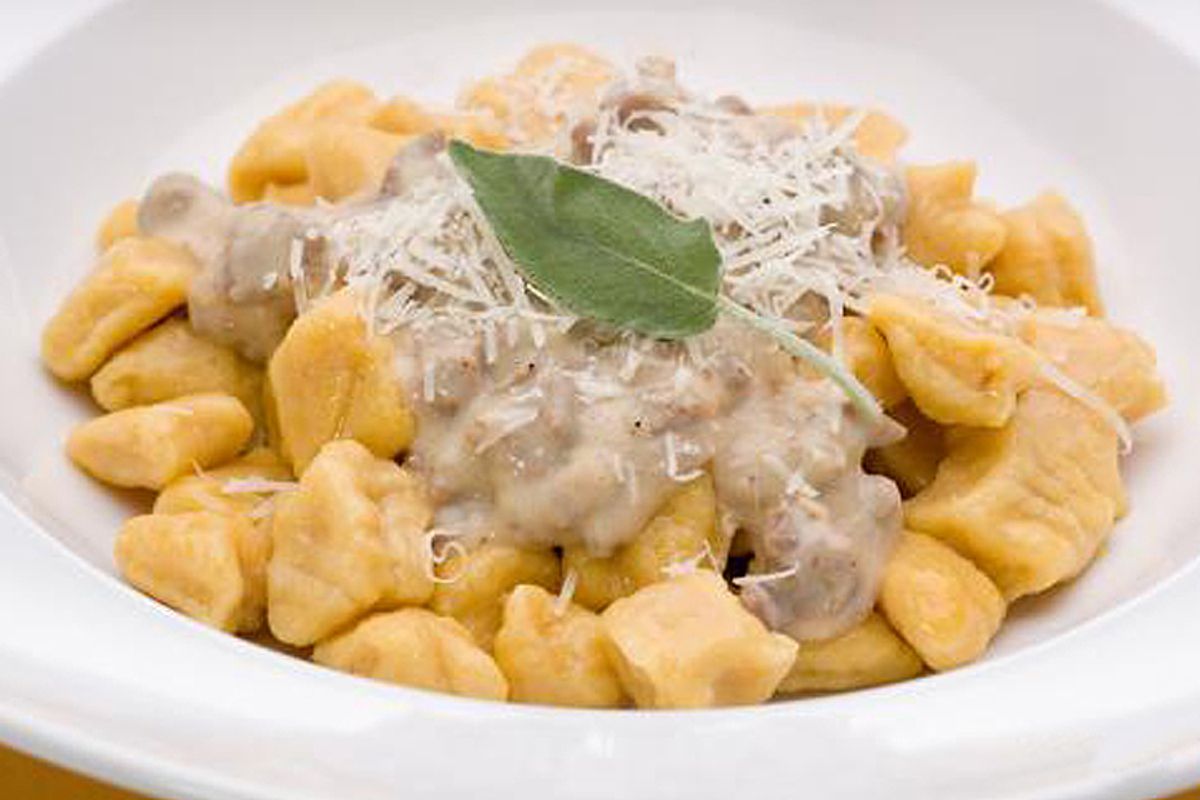 My scariest Halloween involved several confused Dutch semanticists, a screaming French-Canadian dressed like a skeleton, and half a dozen seriously mutilated pumpkins.

I was living and teaching in Vancouver at the time, and attending a Halloween party hosted by a young colleague of mine and his wife. That year, Halloween fell the night before a conference our department was organizing, and my friends (whom I'll call Ben and Marcy) were not only throwing a party, but providing crash space for three conference participants from Amsterdam.

And Ben and Marcy were determined to show our international visitors the full spendor of a North American Halloween.

"Do you guys celebrate Halloween in Holland?" Marcy asked.

"You'll see, it's really fun. People put on costumes, and kids go from door to door to get candy from people. And we carve jack-o'-lanterns."

"Oh! That's what we're going to do tonight!" Ben replied. "See these pumpkins?" He pointed to the pile of basketball-size pumpkins by the fireplace. "We're going to hollow them out and carve faces in them. Then we're going to put candles in them and put them outside! It's going to be great!"

Imagine you are a doctoral student from the Netherlands, and you have just flown halfway around the world to give a talk at a major conference. You are jetlagged, you're exhausted, and you're wondering if there's a flaw in that structure you proposed in Section 3.3.1. And now the very professors you were hoping to impress want you to spend the night before your talk carving faces in fruit.

"Ah. Interesting," one of the Dutch visitors said.

"And then we're going to make a pie from all the pieces we cut out!" Ben added. "Have you guys ever had pumpkin pie?"

Ben and Marcy had everything all worked out. In minutes, several back issues of the Vancouver Sun were spread over the living room floor, and knives were procured for all present. We each grabbed a pumpkin and sat on the floor. I explained to our guests the niceties of pumpkin-carving, from how to cut out a lid around the pumpkin's stem, to the benefits of saving the seeds for roasting and snacking, to the strategic wisdom of drawing your design on the pumpkin with a black Sharpie before carving.

They nodded slowly as they pondered my advice. "I really enjoyed your paper on Principle C violations in Zapotec," one of them said.

Dave was the chairman of our department, and an all-around good sport. His perpetually effervescent wife, Marie-Claire, was the life of every party she attended -- a pretty amazing feat for a teetotaler. Tonight she was wearing a black bodysuit bearing a glow-in-the-dark skeleton design. She pulled off her latex bloody skull mask to give us all proper Gallic kisses on the cheek.

Dave and Marie-Claire immediately put our guests at ease. We settled in on the floor and began hacking away at our pumpkins as Dave chatted about Halloween traditions, snowboarding in Whistler, and his own work-related travels to the Netherlands. Almost all of us had feeble little steak knives, which were not quite up to the task of penetrating the rock-hard pumpkin rinds. But eventually, a goopy pile of pumpkin shards and innards accumulated in the middle of the floor and vaguely face-like patterns emerged on some of the pumpkins.

"Save all that stuff so we can make pie!" Marcy yelled from the kitchen, tossing us a big Tupperware bowl.

We gathered up the gloppy pieces piled on the newspaper and dumped them into the bowl. I wondered if the Vancouver Sun used food-safe ink. And if I should suggest to Marcy that we sort through the pieces to make sure no seeds, residual dirt, or soggy remains of Bank of Montreal ads got into our pie. But I held my tongue: This was Marcy's home and Marcy's show. Not my kitchen, not my problem.

"Do any of you guys know what goes in pumpkin pie filling?" Marcy asked.

"Wait. What the hell?" Ben jumped up and peered out the front window. "Those kids are setting stuff on fire!"

We all ran to the window. A loud group of teenage boys was working its way down the street, tossing lit firecrackers at houses. (Fireworks at Halloween are a Canadian thing.)

"Ooh! Let me take care of this!" Marie-Claire wiped the pumpkin goo from her hands, put on her skull mask, and ran out the door.

"What are you doing?" Ben yelled.

But it was too late. She was already outside.

Our dangerous band of hooligans suddenly looked confused. "Lady!" one of them gasped, "What are you doing?"

"OOOH! OOOH! WOOOOOO!" Now she was lunging at them with her hands above her head in the classic Bela Lugosi pose. "BOOO!" she yelled, thrusting her hands and face at the largest of them.

"Let's get out of here!" one of them yelled, even as his cohorts sprinted down the street ahead of him.

"Wow," Ben said, stepping away from the window.

The low-level sore throat I had been nursing all week had just exploded into a full-fledged fever, and now my brain was reeling. What the hell just happened? We didn't know anything about those kids; Marie-Claire could have gotten beaten up or worse -- but somehow, she knew she wouldn't be. And how did she know her stunt would work? And weirdest of all, why did it work? Since when were teenage boys terrified of petite middle-aged women?

And exactly what was going into Marcy's pie? On further reflection, I decided I really didn't want to know.

I've never been one of those with a connection to the unseen. For me, the mysteries of the living are scary enough.

Here's a non-scary thing to do should you find yourself with a pound of random pumpkin shards. Instead of making a pie, one can use mutilated pumpkin bits to make gnocchi -- little Italian dumplings.

Because pumpkins are so firmly anchored to autumn, they scream for autumn flavors: I've topped the gnocchi with a sweet/salty sauce of crumbled sausage and maple gravy. (The gnocchi recipe is based on one by Lidia Bastianich; the sauce is loosely inspired by the sausage-maple gravy served with foie gras and biscuits at Animal, a lust-inducing Los Angeles eatery.) The combination of pumpkin, sausage, gravy and maple reminds me of all my favorite parts of a classic Thanksgiving dinner; I like to think of it as a preview of coming attractions.