Randy Quaid's most spectacular meltdown yet

The actor and his wife claim refugee status in Canada and go on a paranoid press tour. But what's really going on? 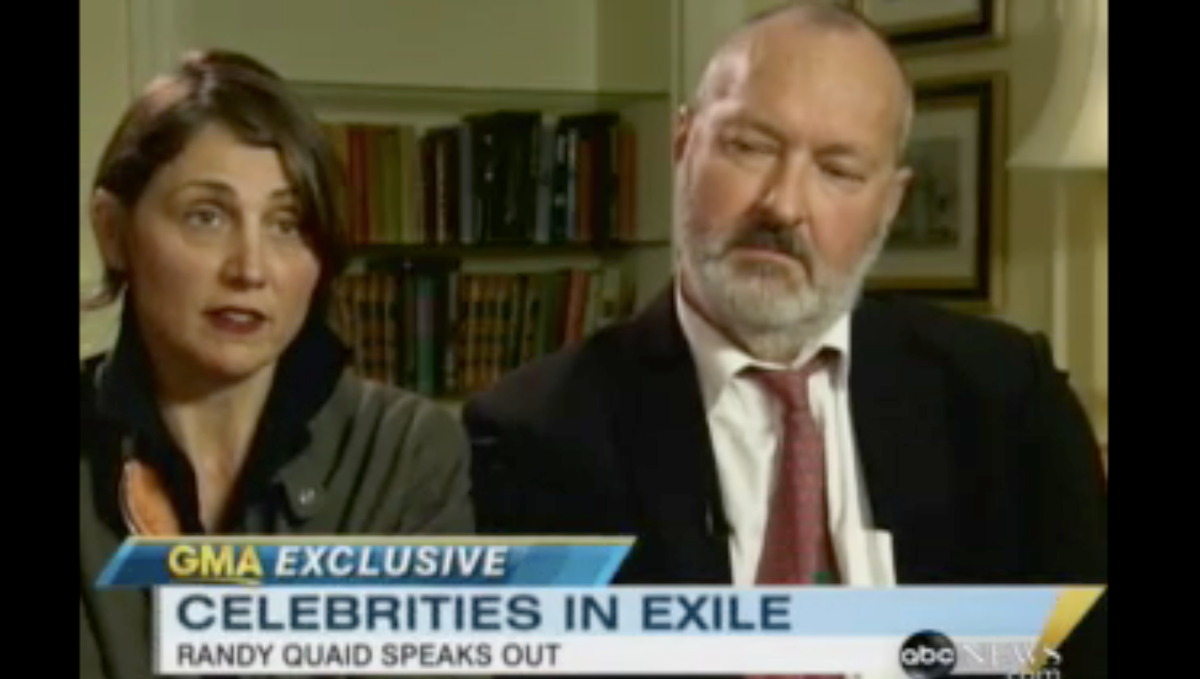 The Quaids on "Good Morning America"
--

Oscar nominated, Golden Globe-winning actor Randy Quaid has never been the biggest star in Hollywood; he's not even in the same league as his leading man brother Dennis. But lately, at the age of 60, he's been making front-page news, snagging prime-time interviews, and generally getting the kind of attention that would be enviable if it weren't horribly sad. Randy Quaid, along with his wife, Evi, have gone off the rails. And because the Quaids themselves may not fully comprehend what's going on in their minds, it's left those watching their meltdown to speculate, in the biggest, most public case of group diagnosis we've seen in a long time.

Quaid's problems first came to light nearly three years ago, when Actors' Equity fined him over $81,000 and banned him for life after the entire 26-member cast of the Seattle production of "Lone Star Love" filed a grievance, stating "he physically and verbally abused his fellow performers and that his oddball behavior onstage and off forced the show to close, thus depriving them of their jobs." It didn't help the Quaids that Evi, according to the restraining order Equity filed against her, repeatedly harassed and threatened its employees, culminating in a physical altercation with a 76-year-old receptionist.

Things got worse for the couple last year, when they were arrested in Texas after allegedly skipping out on a $10,000 hotel bill from the Santa Barbara Biltmore. But things really cranked up in September, when they were arrested again and charged with burglary and entering a noncommercial building without consent. They have also been accused of incurring $5,000 worth of damages while residing in their former guesthouse. Despite the fact the home's current owner has produced paperwork proving the Quaids sold it several years earlier, the couple claim the residence was illegally transferred.

Facing a slew of legal charges, bad press, and the world's most rapidly diminishing career prospects, the couple, ever full of surprises, failed to show up for the arraignment. Instead, they applied in late October for refugee status in Canada. And then it got really weird. In a press conference in Vancouver last week, Quaid spoke of being targeted by a "network … manipulating the banking system and criminal justice system" and, as his voice broke in tears, of a "malignant tumor of star whackers" who have already taken down Quaid's colleagues Heath Ledger, Chris Penn and David Carradine in their conspiracy. He added that other celebrities, including Britney Spears, Lindsay Lohan and Mel Gibson are similarly being singled out.

On Monday, Quaid appeared on "Good Morning America" to reiterate his fears, saying, "They follow us, they tail us, and they tag our cellphone. They hack our computer. We're not faking it." It must agony to be living with that level of anxiety. Whatever it is that is going on with the Quaids, they sure don't look like they're "faking" their emotions.

In the wake of the couple's "GMA" interview, ABC brought out Michelle Golland, "a Hollywood-based clinical psychologist" and associate clinical professor of psychiatry Dr. Harold Bursztajn to conjecture that the Quaids may be suffering a "shared psychotic disorder" known as folie a deux syndrome.  Days earlier ABC let psychiatrist Paul S. Appelbaum speculate that the Quaids were also the victims of their own celebrity sense of entitlement, noting their court no-shows by saying, "It amounts to pretending that something distressing doesn't exist, otherwise called denial."

So what's really eating the Quaids, who insist they are not crazy? Short of their getting professional help and a few second and third opinions, the truth is that nobody knows. All we can do is see two people in a world of pain, pain that can't be explained away by drugs or alcohol or run-of-the-mill celebrity entitlement. And rarely do individuals with that level of paranoia get a platform for their conspiracy theories -- they're generally dismissed as pathetic and crazy and don't get to state their views on national television and in well-attended press conferences.  It's a reminder of what a hell the human mind can be. And that it doesn't matter how famous they may have been or how many arrests they rack up. For people with that level of fear, they're already in the world's cruelest prison.