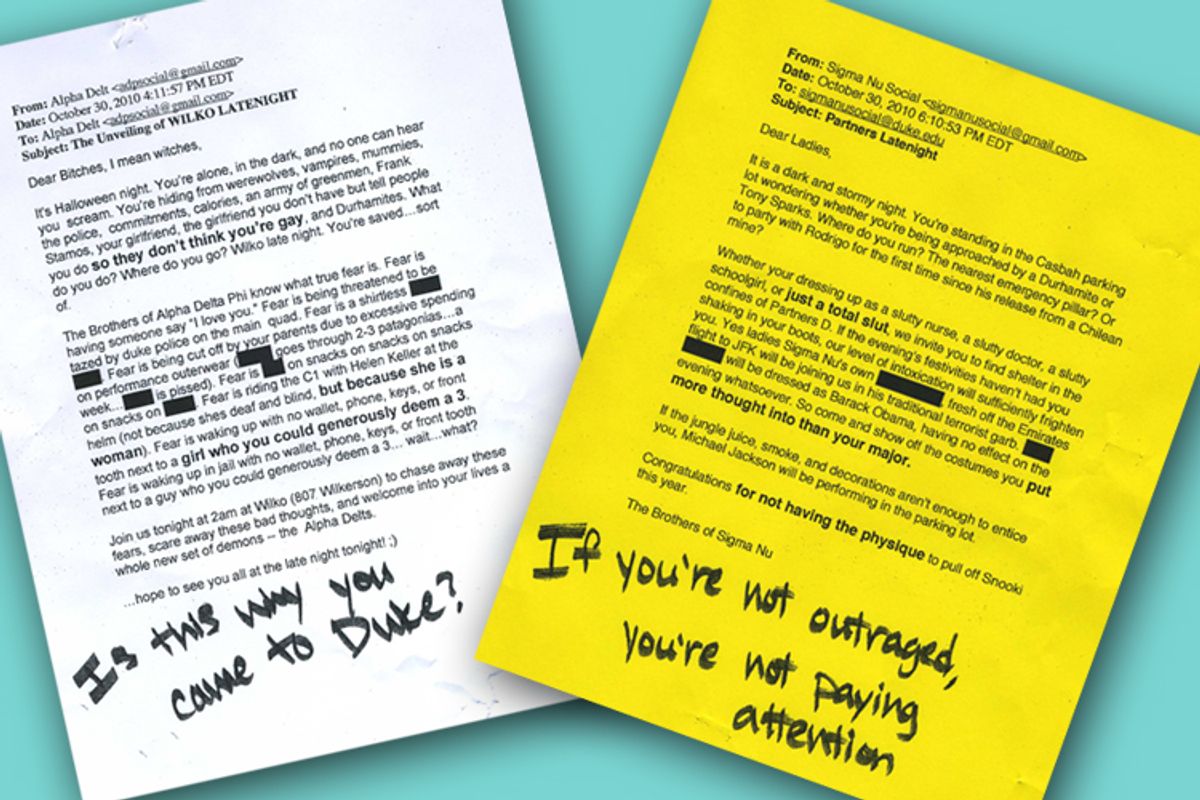 Just weeks after Duke's "sex list" scandal and a Yale fraternity's "rape chant" controversy, another incident has sparked debate about sexual politics at elite universities -- and Duke gets to play host yet again! The Duke Chronicle reports that the campus was papered with florescent printouts of two separate e-mails invites to Halloween parties hosted by Sigma Nu and off-campus frat Alpha Delta Phi. Reporter Ryan Brown, who has written for Salon in the past, explains, "Someone had scrawled a handwritten message across the bottom of each sheet of paper before making copies: 'If you're not outraged, you're not paying attention' and, 'Is this why you came to Duke?'"

Why the call for outrage? The Sigma Nu invite, which was sent to 300 women, read in part:

The Alpha Delts upped the jerk factor by beginning their e-mail invite with "Dear Bitches, I mean witches." After creating a spooky atmosphere -- "You're alone, in the dark, and no one can hear you scream" -- and making a gay joke, the email continues:

The Brothers of Alpha Delta Phi know what true fear is. Fear is having someone say "I love you." ... Fear is riding the C1 with Helen Keller at the helm (not because shes deaf and blind, but because she is a woman). Fear is waking up with no wallet, phone, keys, or front tooth next to a girl who you could generously deem a 3.

Sigma Nu President Sam Zakria told Brown, "This e-mail was an isolated event," he said. "It was a single individual who wrote it and it was a serious lapse in judgment on his part, but it is not representative of the views of our organization as a whole." That sounds a whole lot like what an anonymous member of Yale's Delta Kappa Epsilon told me about a pledge event involving men marching around campus chanting, "No means yes. Yes means anal!" He called it an "anomaly," even though that particular hazing exercise had been passed down for years. Indeed, in the case of these fraternity emails, Brown's interviews with students suggest that these sorts of messages are nothing out of the norm.

As I see it, there's an upside to these recent scandals -- from Karen Owen's piggish PowerPoint presentation to these frat boys' joking about "sluts" and women being bad drivers. The public outcry just might penetrate those hallowed halls and remind students that they still have plenty to learn outside the ivy gates.