The ineluctable return of the McRib

McDonald's elusive rib-shaped sandwich comes back, a symbol of the fakery we've eaten up all campaign season 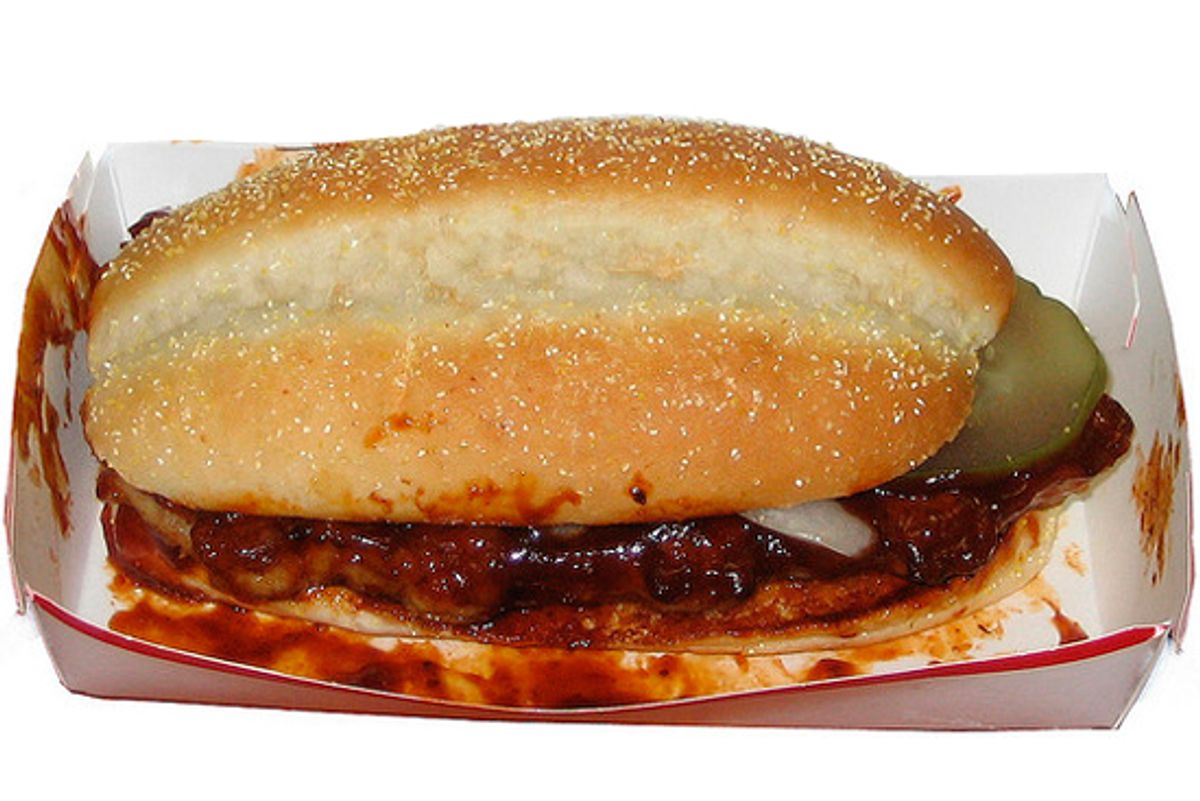 Eating a McRib is like receiving a message from the spirit world. In a wavering voice, a ghost of fast food past asks, "Doooo you remember me? Remember when you could accept that a McDonald's boneless pork-product-patty stamped in the shape of a rack of ribs could be called a 'rib sandwich'?" Why yes, I remember those times well, and Old Ghosty McRib's moans and whispers sound, to me, more like song than like spookiness.

It's been half a lifetime, of course, since I've had one, the McRib being like the lost Atlantis that, every once in a while, floats up from the bottom of the sea. It's available only in select stores for a few weeks at a time, a marketing ploy based on absence making the heart grow fonder and, perhaps, stronger: The patty gets an impressive 75 percent of its calories from fat, and marketers as savvy as McDonald's know it does them little good to actually kill off their customers right away.

But Ronald wheels out the McRib in all of his franchises every now and then, in moments of great cultural importance. Like in 1994, for a tie-in with the live-action Flintstones movie, dovetailing with memories of the giant rack of dino-ribs that tips Fred's car in the cartoon's opening credit. And now, today, Election Day 2010, McDonald's all across the country are once again offering the McRib, neatly symbolizing all the obvious fakery we've been gobbling up during campaign season.

But, as sad as I may be about our politics, I'm glad to commune for a moment with my 7-year-old self, when I first asked my mother why these ribs had no ribs, when she said, "Honey, they're not really ribs. Do you like it?" when I said in return, "Yes, I want another one."

The Approach: I'm excited to eat a McRib, but I'll be honest: At least 50 percent of that excitement comes from nostalgia and 40 percent from how it looks (I'll leave a possible 10 percent for taste). I mean, I can't stress this enough: It is a boneless processed pork patty stamped in the shape of a rack of ribs. That is amazing. When it was introduced in 1982, the McRib was an important advancement in Postmodern Simulacra Cuisine. It was like food you used to pretend to feed to toys, but now you're feeding it to yourself and your kids. Snicker if you will, but now we live in a world where chicken nuggets are considered to be legitimate parts of chicken, and a more than legitimate thing on which to raise your kids. (Fun fact: The man who invented the McRib unleashed the McNugget on the world a year later.)

Bite 1: OK, bite 1 almost didn't happen, because I actually had a hard time taking the sandwich out of the box, the bread smushy with barbecue sauce and the whole thing wanting to flop over like a dead jellyfish. But I took hold of the sandwich and the situation and -- whoomp! -- the biting smell of harsh vinegar had me nearly sneezing. But not to fear, the prodigious quantities of corn syrup in the sauce effectively balances all that sourness.

Bite 2: Two bites in, and I'm ready to say what's delicious about the McRib. The promotional sign at the counter says, jollily, "Joy to the juicy," and the McRib patty is absurdly juicy. I took a nibble off the protruding end and watched the juice literally dribble from it, a stream clear and fatty and salty. There are holes shooting through the patty structure, a network of caves where all this insurgent juice hides, and it occurs to me that this meat-product-patty hasn't ever undergone any kind of "healthy" reconstruction like the McNugget did, so this is free to taste, in all its fatty processed deliciousness, like it did in 1981, back before our scientists willed low-fat mayonnaise into being. The McRib has the confidence of an OG. The OG Mystery Meat.

Bite 3: Have you noticed all the cute graphics and messages on McDonald's new packaging? Like this, on the McRib box: "YOUR OLD FRIEND IS BACK." Well, yes, it's always nice to see an old friend. Like Calista. I haven't talked to Calista in years. I wonder how she's doing? But wait, there's more to read! "It's the telltale sign of that tangy barbecue sauce that's left its mark on your lips. The fact that the tender boneless pork is smothered in it means there's no way of getting away with this love affair." Oh my. Well, I didn't quite expect this old friendship to go there. And now that you mention it, well, Calista was always pretty hot. I mean, Jesus, she was sexy. Calista, if you're reading this … you still have my number, right?

Bite 4: Ahem. So, back to the McRib. What does all that juicy "meat" taste like? It's … hard to say. I still can't tell. It doesn't taste much like ribs at all. It has a generic meatiness, which I'm sure they've copyrighted. GenericMcMeatiness™. It's like sausage patties, but without all the sage and seasoning. Which, I mean, is not objectively good, but I keep on eating …

Bite 5: You know what else is really impressive? The onions. This thing is just piled with thick slices of raw onions, which normally freaks me out just a little, but there's hardly any onion burn, there is hardly any onion flavor, and I hardly have any onion breath. (Hhhhhey, Calista.) How does that happen? Is that another patented product? InoffensiveMcOnion™?

Bites 6-10: OK, so after like 1,000 words of gently making fun of the McRib, it has thoroughly and completely disappeared. All my grown-up skepticism of its weirdness took a happy back seat to the 7-year-old me, knocking on the window of my mom's car, begging her to pull into the McDonald's on Route 18 on our way to the mall. I don't feel this way about the Big Mac, don't feel this way about the Quarter Pounder. It's totally that McDonald's will follow through on its threats to retire this thing for a decade at a time that makes this work. The sandwich's legend grows in the heroic fields of our imagination, turning, at some point, from simply being "the best thing I ever ate when I was a kid!" to something even grander, more mythic. Did you know a McRib once saved the Queen of England's life?

I recently heard a chef tell a story. A customer asked him why he doesn't make paella, the famous rice dish of Spain. "Why do you want to eat paella?" he asked her, and she proceeded to tell him about the time she went to the Costa Brava, got lost, found her way to the beach just as the sun was setting, the sea lighting up like fire. There was a stand there, selling paella, loaded with the freshest seafood known to man, and she sat with her husband, eating this food, knowing that they would remember this for the rest of their lives. "See?" the chef said. "I don't make paella because I could never compete with that memory."

But today, with the McRib, with all the force of McDonald's world-crushing powers of consistency, I can have exactly the same sandwich today as the first time I had it, pudgy-cheeked and baby-faced. How could I turn that down?