Pink wants you to beat your kids 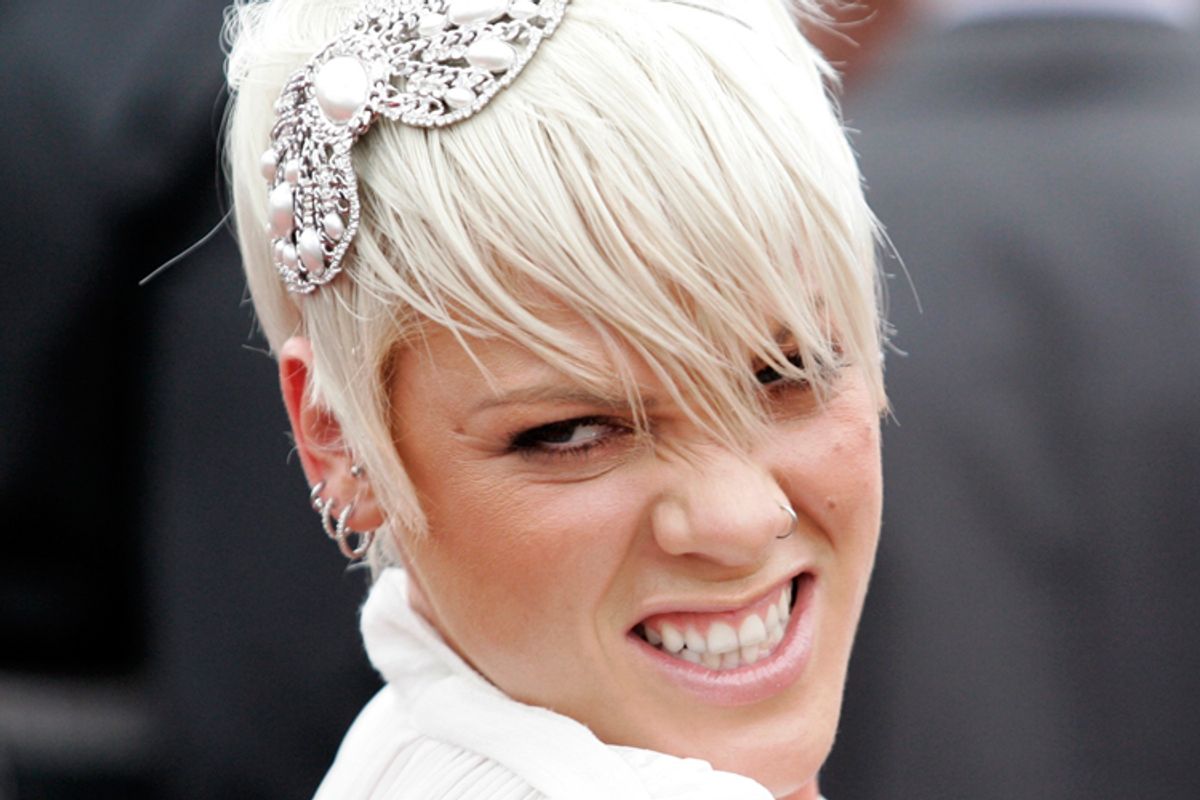 Dr. Spock she's not. On Tuesday, professionally feisty pop singer Pink, promoting her greatest hits collection on "Access Hollywood," candidly discussed a troubled childhood that went south after her parents divorced when she was 7. She was smoking at age 9 and doing acid and running away from home by the time she was in her teens. But she got through it, she explains, with some old school parental intervention. "Did your father spank you?" Billy Bush asked her. "Oh, he put me through a wall," she replied. "It’s the only reason I’m still here. It’s the only reason I’m still alive." Thanks, Dad!

The former Alecia Moore is a classic bad girl gone good. She was kicked out of the house when she was 15, straightened out her act, and by the time she was 21, she was a star. Since then, she has mined her troubled early years repeatedly for inspiration in her music, including the aching "Family Portrait" in which she sings of hearing smashing glass and pleads, "Daddy, please stop yelling." And her rousing new single, "Raise a Glass," is a tribute to all the "underdogs" who are "wrong in all the right ways" like her. Her days of Dad assisting her into walls behind her, Pink today has a close relationship with her parents. A few years ago she even recorded a song her Vietnam vet father wrote -- and sang it with him -- for her "I'm Not Dead" album.

There's a vast world of difference between a parent who takes out his anger on a small child and one who is perhaps trying to restrain a full-size, combative teenager who may be tripping her brains out. It's no secret that adolescents can be scary and violent, and Pink's admission that she would have kicked herself out of the house a lot sooner suggests she was not a girl for whom a stern "You're grounded, missy" would have done the trick.

Yet Pink's droll observation to "Access Hollywood" that "I think parents need to beat the crap out of their kids" doesn't ring as a success story of tough love; it sounds like an endorsement of child abuse. "I think the whole spanking and how it’s all gotten p.c. is just for the birds," she continued. And if she and her colorful family have worked out their issues in their own unique way, fantastic. But you've got to wonder, chicken-and-egg style: Would teenage Pink have been running quite so wild if 8-year-old Alecia hadn't been exposed to so much domestic turmoil and apparent aggression? Could her father beating her at 15 have had anything to do with the tensions of years earlier? Effect, you might want to take a gander around for cause.

Pink will never be confused with Penelope Leach, but the fact that she's freely advising parents to rough up their offspring is depressingly disturbing. Does a parent ever "need" to beat the crap out of his or her kids? In extreme situations where an out-of-control teen is being legitimately threatening, the imperative to defend oneself makes sense. But if you're assuming kids "need" to be assaulted because that's what worked for you, how do you ever learn that plenty of people make it to adulthood unscathed? And if that's your unqualified conviction when you don't have children, what hope of a nonviolent home is there when and if you do? People don't refrain from hitting their own children because it's p.c.; they do it because it's the right and human and loving way to behave. And abuse is just plain wrong, in all the wrong ways.