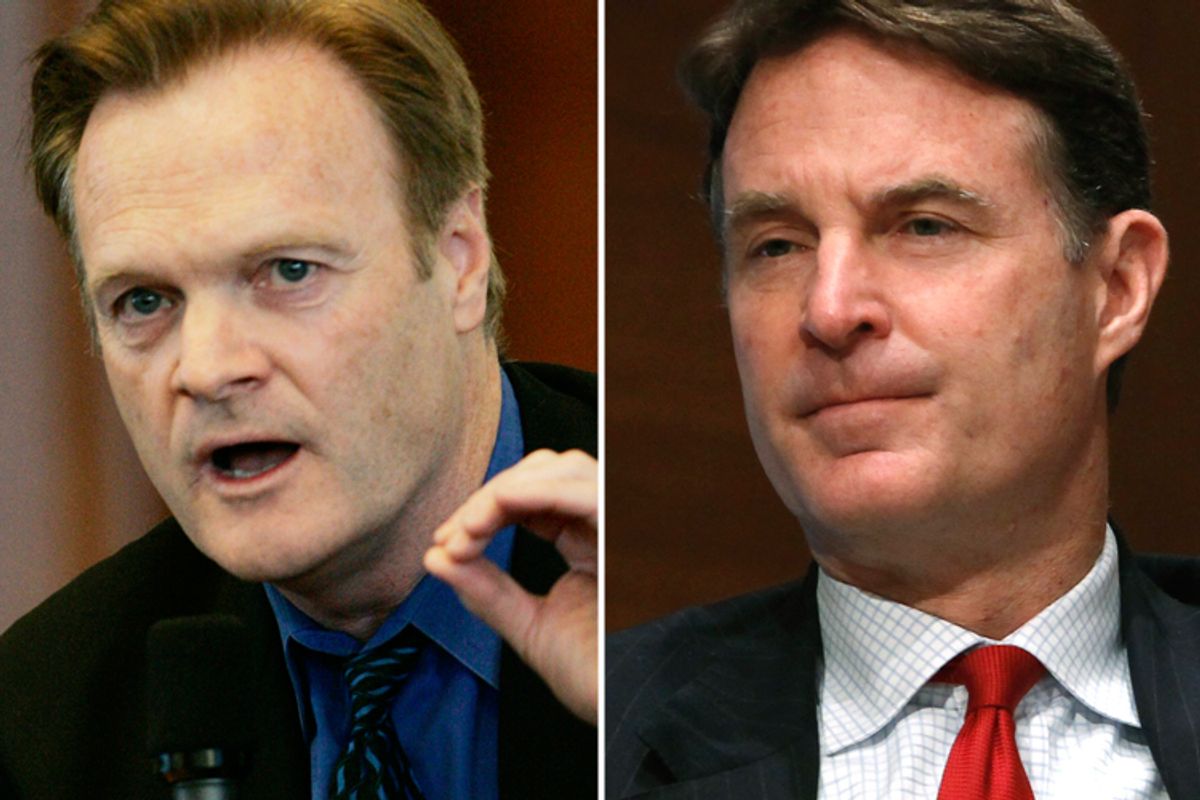 Ten minutes was the absolute maximum I could endure of any one television news outlet last night without having to switch channels in the futile search for something more bearable, but almost every time I had MNSBC on, there was Lawrence O'Donnell trying to blame "the Left" and "liberalism" for the Democrats' political woes.  Alan Grayson's loss was proof that outspoken liberalism fails.  Blanche Lincoln's loss was the fault of the Left for mounting a serious primary challenge against her. Russ Feingold's defeat proved that voters reject liberalism in favor of conservatism, etc. etc.  It sounded as though he was reading from some crusty script jointly prepared in 1995 by The New Republic, Lanny Davis and the DLC.

There are so many obvious reasons why this "analysis" is false: Grayson represents a highly conservative district that hadn't been Democratic for decades before he won in 2008 and he made serious mistakes during the campaign; Lincoln was behind the GOP challenger by more than 20 points back in January, before Bill Halter even announced his candidacy; Feingold was far from a conventional liberal, having repeatedly opposed his own party on multiple issues, and he ran in a state saddled with a Democratic governor who was unpopular in the extreme.  Beyond that, numerous liberals who were alleged to be in serious electoral trouble kept their seats: Barney Frank, John Dingell, Rush Holt, Raul Grijalva, and many others.  But there's one glaring, steadfastly ignored fact destroying O'Donnell's attempt -- which is merely the standard pundit storyline that has been baking for months and will now be served en masse -- to blame The Left and declare liberalism dead.  It's this little inconvenient fact:

Tuesday was a tough night for Democrats, as they watched Republicans win enough seats to take back the House in the next Congress and began to ponder life under a likely House Speaker John Boehner (R-Ohio). But one group hit especially hard was the Blue Dog Coalition, with half of its members losing their seats.

According to an analysis by The Huffington Post, 23 of the 46 Blue Dogs up for re-election went down on Tuesday. Notable losses included Rep. Stephanie Herseth-Sandlin (D-S.D.), the coalition's co-chair for administration, and Rep. Baron Hill (D-Ind.), the co-chair for policy. Two members were running for higher office (both lost), three were retiring and three races were still too close to call.

The Blue Dogs, a coalition of moderate to conservative Democrats in the House, have consistently frustrated their more progressive colleagues and activists within the party . . . .

Half of the Blue Dog incumbents were defeated, and by themselves accounted for close to half of the Democratic losses. Some of us have been arguing for quite some time that the Rahm-engineered dependence on Blue Dog power is one of the many factors that has made the Democratic Party so weak, blurry, indistinguishable from the GOP, and therefore so politically inept, and would thus be stronger and better without them -- here's a 2008 Salon article I wrote making that case.  Despite viewing last night's Blue Dog losses with happiness, I wouldn't point to this outcome as vindication for my argument, as there are many complex factors that account for last night's crushing of Congressional Democrats: widespread economic suffering, anxiety over America's obvious decline, the perception that Obama has done little to undermine destructive status quo forces and much to bolster them, etc. etc.

But for slothful pundits who want to derive sweeping meaning from individual races in order to blame the Left and claim that last night was a repudiation of liberalism, the far more rational conclusion -- given the eradication of 50% of the Blue Dog caucus -- is that the worst possible choice Democrats can make is to run as GOP-replicating corporatists devoted above all else to serving corporate interests in order to perpetuate their own power: what Washington calls "centrists" and "conservative Democrats."  That is who bore the bulk of the brunt of last night's Democratic bloodbath -- not liberals.

One other point about the standard pundit line: for all the giddy talk about the power of the "Tea Party" -- which is, more than anything else, just a marketing tactic for re-branding the Republican Party -- the reality is that the Tea Party almost certainly cost the GOP control of the Senate. Had standard-issue GOP candidates rather than Tea Party fanatics been nominated in Delaware, Colorado, Alaska and Nevada, the Republicans would have almost certainly won those seats (in Alaska, rejecting the GOP incumbent in favor of a Tea Party candidates appears to have ensured that Lisa Murkowski will return to DC as a GOP-hating reject rather than a loyal Republican, the way Joe Lieberman returned after 2006). That's not a criticism of the Tea Party -- I think it's admirable to support candidates who represent one's views and be willing to take a few extra losses to do so -- but the Tea Party storyline from last night is one that is far from unadulterated success; in the case of Senate control, it's quite the opposite.

UPDATE:  On a related note, in The New York Times today, one finds the spectacle of Evan Bayh -- who gave up his Senate seat to a Republican while he frolicks around in the millions of dollars his wife receives from the health care industry -- demanding massive entitlement cuts for the poor and freezes on the pay for government workers, while also blaming the Democratic loss on the alleged fact that "we were too deferential to our most zealous supporters."  Is he referring there to the escalation in the war in Afghanistan, the massive increase in civilian-slaughtering drone attacks, the virtually wholesale embrace of the Bush/Cheney civil liberties architecture, the defense of Don't-Ask/Don't-Tell and DOMA, the multi-billion-dollar bailout of Wall Street, the failure to stem the tide of the foreclosure crisis, or the elimination of the public option?  Apparently, the lesson Evan Bayh -- and most pundits -- took from last night's results, and which they want the Party to learn, is that if only Democrats had suppressed the enthusiasm of their base just a little more, they would have won.

UPDATE II:  The number of Obama followers writing to me on Twitter and elsewhere telling me that left-wing critics of the President are the primary cause of last night's outcome -- rather than massive economic suffering and the actions of their Leader -- is even more than I expected.  Bizarrely, they actually seem to have convinced themselves of this; I suppose one who is desperate to cling to their leader-love will find any theory that shields him from responsibility.  Behold the supreme power of the Professional Left!!