The case for Nancy Pelosi sticking around

Two days after the election, and she's still the Dems' leader. She's not thinking of staying, is she? 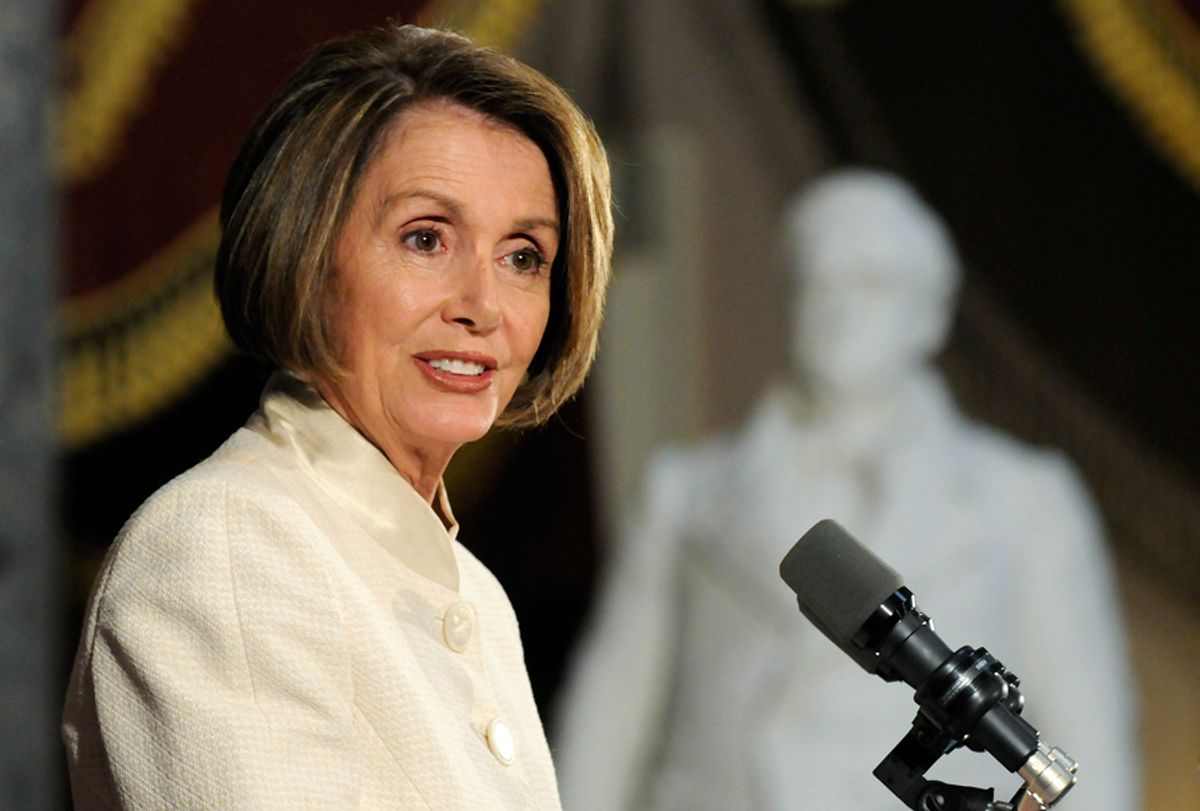 Before the election, I wrote that Nancy Pelosi would step down as the House's Democratic leader if her party lost control of the chamber -- and that she'd probably leave Congress altogether. And as a the expected GOP landslide played out Tuesday night, I even offered a political eulogy for the House's first female speaker.

But it's been two days since her party lost more than 60 House seats, and Pelosi hasn't made any announcement, nor has anyone moved to challenge her. By contrast, when Republicans lost control of the House in the 2006 midterms, Dennis Hastert announced the next day that he'd stand down as GOP leader, making way for John Boehner, who beat back a token challenge for the minority leader's post. So far, Pelosi has given one post-election interview, telling ABC's Diane Sawyer on Wednesday that when it comes to her future plans, "in our caucus, we always do things by consensus. And when we have that consensus, we'll have some announcement to make."

Most likely, this is all a formality, and Pelosi will give up her leadership post in the next few days. Given the scale of her party's defeat, it's hard to imagine her staying -- just as it's hard to imagine her being able to stomach a demotion from speaker to minority leader. So why not call it a career, write a book and let history -- if not today's electorate -- appreciate the significant achievements that have marked her four-year run as speaker?

That said, it wouldn't be entirely unheard of for her to stay on. Hastert is the only speaker in modern times to retain his own district seat in an election in which his party lost control of the House, so there really aren't a lot of precedents for this situation. After the GOP suffered unexpected losses (while retaining their majority) in 1998, Newt Gingrich stepped down as speaker and resigned his House seat -- a move that caught Washington by surprise. And when Democrats lost control of the House in '94, then-Speaker Tom Foley lost his own reelection race in Washington state, sparing him the dilemma Pelosi now faces. Before that, the speaker's gavel was wielded by a series of Democrats who all left office voluntarily, with their party still in control (with the exception of Jim Wright, who was forced out in an ethics scandal in 1989).

But maybe, just maybe, Pelosi is thinking of Sam Rayburn, who was speaker when Democrats suffered a 55-seat drubbing and lost control of the chamber in the 1946 midterm elections. "Mr. Sam," who had held the gavel since 1940, simply slid over to the minority leader's post, which he held for the next two years -- when Democrats, riding Harry Truman's surprise reelection coattails, scored a 75-seat pickup, winning back the House. At that point, Republican Speaker Joe Martin became the new minority leader, while Rayburn reclaimed the top job. The two switched places again after the 1952 election, with Republicans winning the House back on Dwight Eisenhower's coattails, and in 1954, when Rayburn and the Democrats reclaimed the chamber in Ike's first midterm.

Given the right's venomous demonization of her, you can imagine the satisfaction that Pelosi would take from leading her party into the 2012 election and somehow winning back the majority. But it's not likely that she, or any Democratic leader, will be able to engineer such a quick turnaround, given that so many of the seats that the GOP won back this week were in districts that voted for John McCain in 2008 or where Barack Obama's margin over McCain was narrow -- the kinds of districts that Democrats can't really win unless Republicans are in control of Washington and voters are upset (like in 2006 and 2008). Democrats can certainly make gains in 2012 -- as they did in 1996, two years after the Gingrich "revolution" -- but enough to take back the House? It's hard to see.  Still, the idea of achieving such vindication two years from now, however unlikely, could be part of her current calculations.

Then there's the Steny Hoyer factor. That Pelosi and Hoyer don't get along is well known. Their rivalry literally dates back decades, to when they both interned for Maryland Sen. Daniel Brewster in the mid-1960s. Since defeating Hoyer in a 2001 leadership battle and claiming the minority leader's post a year later, Pelosi has labored to insulate herself from an intraparty challenge, filling most top leadership positions with low-key loyalists -- and moving aggressively to thwart efforts by Hoyer allies to win key posts. When Democrats won their majority in 2006, Pelosi's first act was to support John Murtha's campaign to oust Hoyer from the No. 2 leadership post -- an effort that failed.

But because there are no other logical successors, Hoyer is now well positioned to take over for Pelosi if she leaves. Asked by Politico on Wednesday if he'll pursue the position of minority leader, Hoyer said, "If the speaker doesn't run, yes." It's possible that tensions between Pelosi and Hoyer have eased enough that she'll agree to hand off power to him now; personal relationships on Capitol Hill can be hard to read. It's also possible that Pelosi is looking for a way to use her remaining clout to muscle someone besides Hoyer into the top slot -- perhaps explaining why she's been mum on her plans so far. It's also conceivable that the absence of a viable alternative to Hoyer would prompt her to stay -- and that the thinner, more liberal Democratic caucus that remains after Tuesday will stand with her.

If Pelosi were to stick around, Republicans will undoubtedly react with glee, insisting that her lingering presence will cost Democrats in 2012. But that kind of talk is probably overstated. There seems to be a correlation between the visibility of House speakers and their negative poll numbers. Thus, Pelosi, like Gingrich before her, has not fared well in polls -- she is, after all, the public face of a chronically maligned institution at a time of immense popular anxiety. She does make a useful caricature for Republicans in helping to motivate their base; in this sense, she might make it slightly tougher for Democrats to win back the McCain districts they lost this week in 2012. But if the economy improves and Obama is well positioned to win reelection in 2012 -- like Clinton was in 1996 -- Pelosi won't be much of a liability for Democrats.