"Client 9": The Eliot Spitzer case: How we were bamboozled

An intriguing new movie dissects the thicket of money, lies and rumors around the governor's downfall 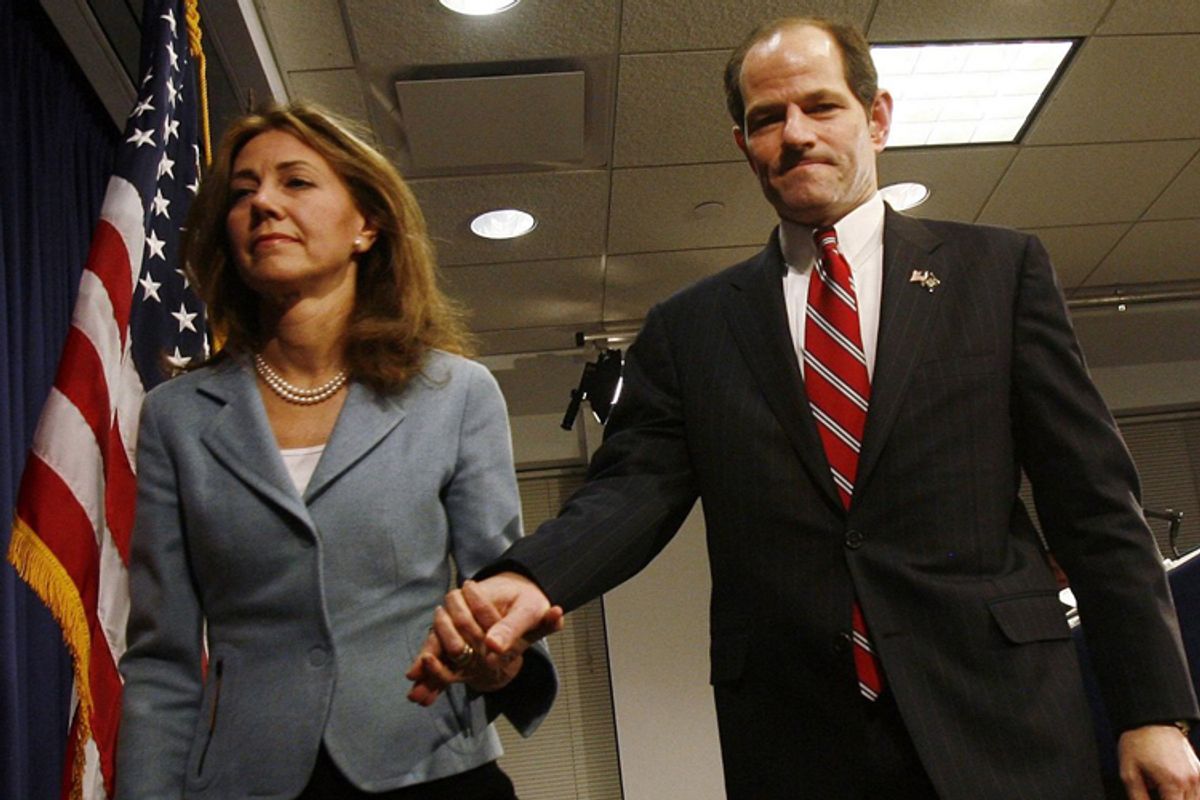 Perhaps you've noticed this lately: It's remarkably easy to distract people from substantive issues by telling them entertaining stories, whether or not they bear any relationship to the truth. (E.g.: "The Muslim socialist raised your taxes!" may be a lie from beginning to end, but it has a lot more narrative appeal than "We're the people who let the bankers steal your grandkids' money, and we'd like to do it some more.")

Unfortunately for former New York Gov. Eliot Spitzer, the stories his enemies got to tell about him were true, at least in part. But the fact that Spitzer must take the blame for his own misdeeds -- and for his hypocrisy -- should not obscure the more important fact that the media and the public got fatefully bamboozled by the Spitzer story. "Politician caught with pants down" and "White knight has feet of clay" are stories we're all drawn to, almost by primal instinct. They satisfyingly confirm all our worst suspicions about human nature. But that primal satisfaction was used, in this case, to distract our attention from the takedown of one of the few American politicians devoted to fighting corporate power and ruling-class privilege, an act that in retrospect looks an awful lot like a political assassination.

As Spitzer himself tells Oscar-winning documentarian Alex Gibney in the latter's cool and intriguing new exposé, "Client 9: The Rise and Fall of Eliot Spitzer," his rapid political ascent and sudden collapse carried echoes of Icarus, the hubristic aviator of Greek mythology. A crusading attorney general who took down some of Wall Street's biggest white-collar criminals, Spitzer was elected to the Empire State's governorship in a 2006 landslide, and was repeatedly and only half-jokingly described as "our first Jewish president" by political insiders.

Spitzer's abrasive and confrontational style had served him well as a prosecutor, but it was far less effective in dealing with the murky alternate universe of New York's state Legislature, probably America's most corrupt and dysfunctional deliberative body. (Yes, I realize what a high standard that is.) But whether Spitzer would have succeeded or failed in wrestling Albany's back-roomers will never be known, because he resigned 13 months into his term. The proximate cause, of course, was a federal investigation revealing that Spitzer was among the prestigious patrons of a high-end escort service called Emperor's Club VIP. A United States attorney's document, which was leaked to the New York Times and several TV stations, supplied a suspicious amount of detail about "Client 9," without naming him, and sleuthy reporters soon connected the dots.

I guess it's only natural that we got sucked into the usual celebrity-journalism vortex, focusing on the most inane and salacious of the alleged facts and totally neglecting to notice how Spitzer's fall fit into the larger cultural and political narrative of American life. A young woman named Ashley Dupré got far more than her allotted 15 minutes of fame out of a single liaison with Spitzer at Washington's Mayflower Hotel, and Gibney -- working here in collaboration with investigative journalist Peter Elkind, the author of "Rough Justice: The Rise and Fall of Eliot Spitzer" -- plays along to some extent. One of Dupré's former co-workers describes her as possessing "great pheromones" and "an amazing coochie." Further elaboration, sadly, is not forthcoming.

Spitzer's favorite Emperor's Club consort was a woman identified only as "Angelina," who agreed to be interviewed by Gibney and Elkind but wouldn't appear on camera. Instead of the usual obscured-face-plus-distorted-voice trick, Gibney hired an actress to read her lines. Maybe this pushes "Client 9" further into docudrama than nonfiction purists would prefer, but it does Angelina a service, by making this independent and outspoken woman come alive, and so reminding us that prostitution is always a complicated human transaction. She disliked Spitzer at first for his wham-bam-thank you ma'am approach (an Emperor's Club date was supposed to be more, well, datelike), but grew to admire his intelligence and intensity. And contrary to what you may have read elsewhere, she says he took his socks off during sex.

As irresistible as the Ashley and Angelina material may be, that stuff is really the icing on Gibney's cake, which is an elegantly told New York fable about a smart, arrogant guy who made a whole lot of the wrong kinds of enemies. "Client 9" builds a forceful, if circumstantial, case around the disclosures that led to Spitzer's downfall. Avowed Spitzer haters like investment banker Ken Langone, former AIG CEO Hank Greenberg and ex-New York Stock Exchange head Dick Grasso were clearly seeking any opportunity to take the governor down, and Langone has made murky comments to the effect that he knew about the prostitution scandal before the news broke. (See, a friend of his was in line behind Spitzer at the post office ... No, really.)

Notorious right-wing political trickster Roger Stone has claimed to be the initial source who told the FBI about Spitzer's dalliances with hookers (and he's definitely the source of the scurrilous knee-socks allegation). Although Stone was an aide and confidante to state Sen. Joe Bruno, one of Spitzer's biggest Albany foes, Stone says he heard about the whole thing on his own, at random, from a hooker in a Miami nightclub. (Given Stone's background and reputation, that part of the story is strangely believable.) Add up all these billionaires, rogues and past and future indictees -- along with a scandal-plagued Justice Department at the tail end of the George W. Bush era, eager to claim the scalp of a leading Democrat -- and the whole thing looks overdetermined, as the Marxists say.

Nothing about this case is clear-cut, and we'll probably never know for sure. (The official story, via the government and the mainstream media, is that the whole thing emerged from a routine money-trail investigation and Stone et al. had nothing to do with it. Not impossible, but not all that plausible either.) If "Client 9" plays a lot like a murky, gripping political thriller, it lacks a fully satisfying ending -- or a fully satisfying hero. Spitzer manfully owns up to his misbehavior and declines to point fingers at anyone outside the mirror, but he also comes across as an emotionally strangled dude, totally incapable of the Oprah-style introspection that will be required if he tries to make a political comeback. Whether it's a good thing that we demand Augustine-level soul-searching from a disgraced public figure is entirely another matter, but as the movie makes clear, Spitzer's lack of personal warmth and political instinct is part of what got him into this mess in the first place.

In fact, I too am seduced, like everybody else, by the personal details. Maybe the real story ought to be how a product of Manhattan wealth and privilege turned on his own caste, attacking the corrupt financial elite with a zeal not seen since the days of Teddy Roosevelt, and then was punished for his class treachery (just before his crusade was 100 percent vindicated by recent history). Instead, I am captured by an offhand moment in "Client 9," when one of Spitzer's Albany aides describes him as unable to understand basic human nature, and to accept that political change is always incremental. Politicians can survive all sorts of moral failings and ludicrous misbehavior, as long as people like them (see: Clinton, William Jefferson). Spitzer's entire career rested on being above reproach -- and nobody ever likes the guy who's above reproach.