Less than 48 hours after the election, the top Senate Republican calls for President Obama's defeat in 2012 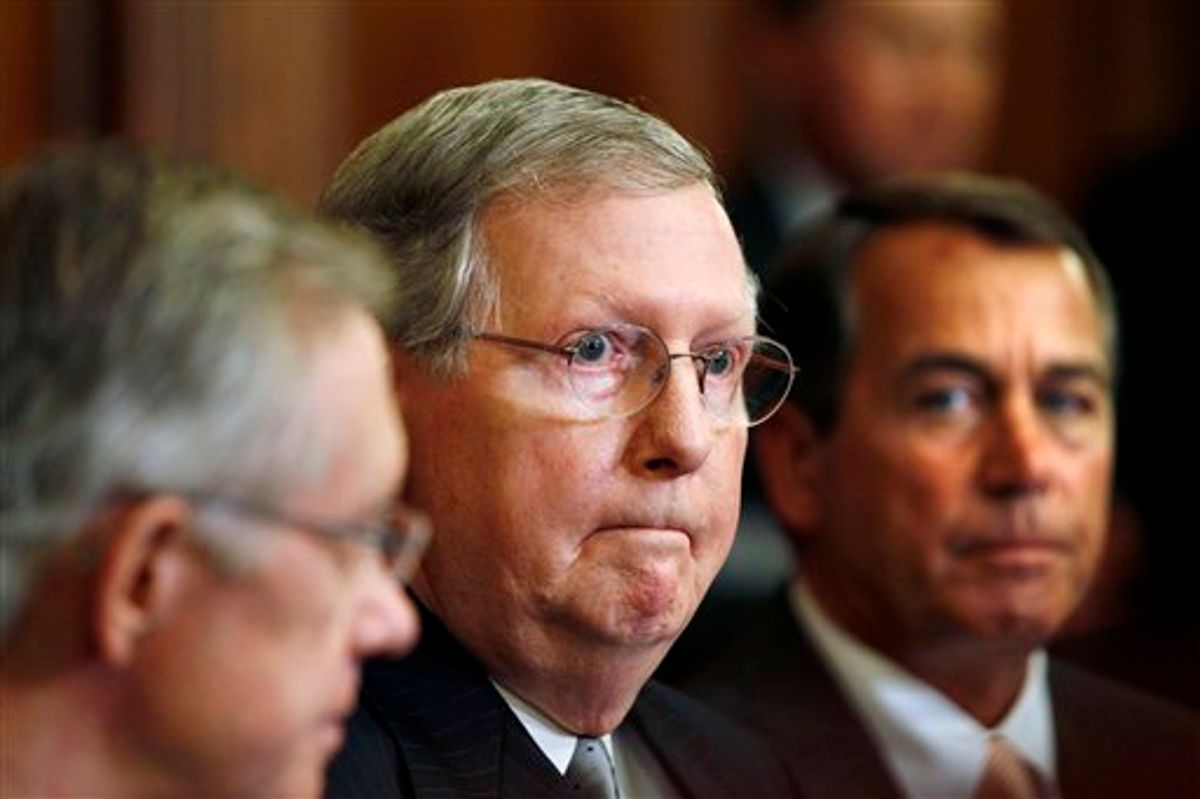 Let's be clear why Mitch McConnell, the Senate's Republican leader, decided less than 48 hours after the midterm results were announced to deliver a speech to a right-wing organization reiterating his previous statement that the GOP's top priority should be President Obama's defeat in 2012: He's feeling the heat from the Tea Party.

"Over the past week," McConnell said Thursday morning at the Heritage Foundation, "some have said it was indelicate of me to suggest that our top political priority over the next two years should be to deny President Obama a second term in office. But the fact is, if our primary legislative goals are to repeal and replace the health spending bill, to end the bailouts, cut spending and shrink the size and scope of government, the only way to do all these things is to put someone in the White House who won't veto any of these things."

McConnell has been the top Senate Republican since 2006 and his post is safe -- for now. But several allies of his main intraparty foe, Tea Party godfather Jim DeMint, were elected on Tuesday, including Marco Rubio and Rand Paul, McConnell's fellow Kentuckian. DeMint doesn't have the votes for oust McConnell as leader, but he can cause him plenty of grief because of his bond with the Tea Party passes who -- as they demonstrated in primary after primary this year -- now hold sway in the GOP. DeMint is unafraid to accuse his fellow Senate Republicans of ideological heresy, and if he decides in the coming months that McConnell is charting an insufficiently confrontational course as leader, he'll surely speak up. If Republican senators are then forced to choose between DeMint's strategy and McConnell's, they'll face a powerful incentive to buck their leader: the threat of a primary challenge. As Christine O'Donnell and Joe Miller demonstrated this year, if Republican primary voters are confronted with a "sell-out" establishment candidate, they are -- at least for now -- willing to vote for literally anyone else, general election consequences be damned.

This is the backdrop against which McConnell, a quintessential establishment Republican (he voted for TARP!), delivered his remarks today. Consider it an early effort to curry favor with his party's base and to inoculate himself against any future accusations from DeMint (or any other Tea Party titans) that he's compromising too much with Obama.

In this, there is clear political opportunity for Obama. McConnell's speech today demonstrates the extent to which he'll be hogtied by the Tea Party over the next two years, unable to pursue any serious compromise with Obama and the Democrats without risking an insurrection from his party's base. Which means that McConnell and the GOP may well end up pushing the same sort of politically toxic agenda that Newt Gingrich's Republican "revolutionaries" pursued when they took power in 1995. Which would put Obama in position to present himself the same way Clinton did back then -- as the last line of defense against a band of fervent ideologues who had misread and over-interpreted an election result and who were trying to destroy the country's social safety net. That's a different role than Obama has been playing the last two years -- and, potentially, a more popular one.