Why all the fuss over Qantas emergency landing?

It was a relatively minor event. Could it be the novelty of the Airbus A380 involved? 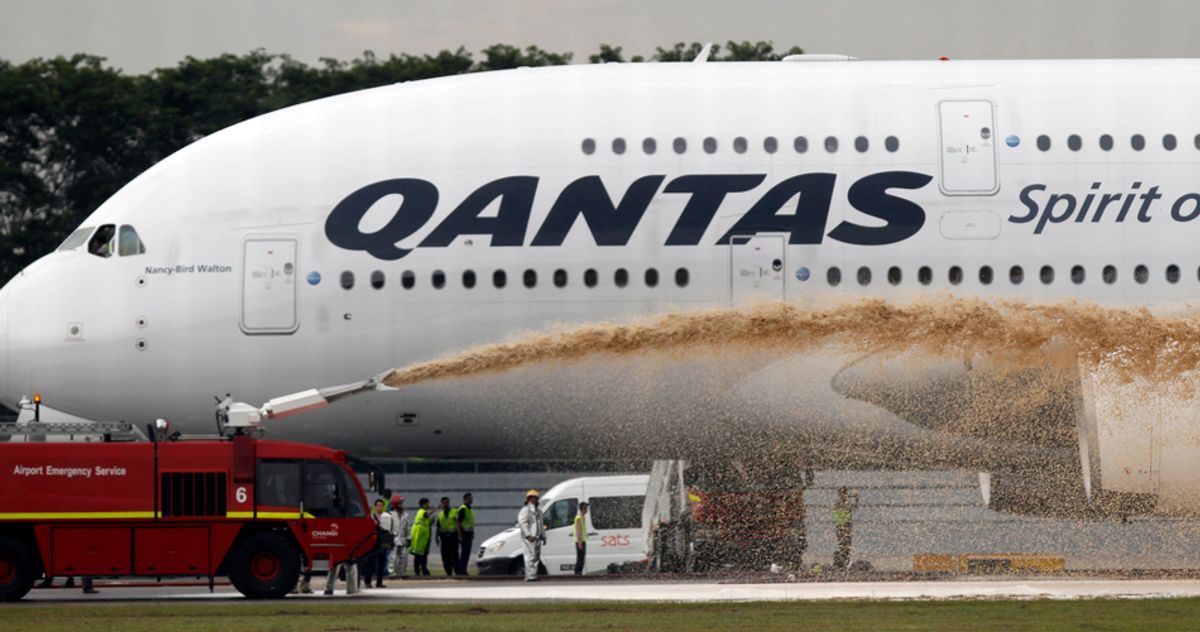 Qantas Airways 380 passenger plane flight QF32 is sprayed by rescue services after making an emergency landing at Changi airport in Singapore November 4, 2010. The Airbus A380, which had originated in London and was carrying 459 people, suffered failure of one of its four engines shortly after it had left the island state en route for Sydney. Australian officials said no one on board was injured. REUTERS/Vivek Prakash (SINGAPORE - Tags: TRANSPORT DISASTER BUSINESS IMAGES OF THE DAY) (Â© Vivek Prakash / Reuters)
--

On Thursday an Airbus A380 flown by Qantas Airways made an emergency landing in Singapore after suffering an engine failure shortly after takeoff.

The first question is what, exactly, went wrong? We know the engine failed, but we don't know why. One theory suggests ingestion of a foreign object -- namely, a bird. The failure occurred well into the airplane's climb, but birds can be found at surprisingly high altitudes and, as the 2009 Hudson River splashdown showed us, result in catastrophic engine damage.

More likely, though, this was some kind of internal malfunction. Reports and photographs indicate an uncontained, or at best semi-contained, failure. The innards of a jet engine consist of a series of compressors and turbines rotating at tremendous speeds -- many thousands of RPM. In an uncontained failure, fragments of these discs can burst through the engine casing. In a worst-case scenario, shrapnel can puncture the wing or fuselage, resulting in fuel leaks, fire, depressurization and injury to a plane's occupants.

But that's a rare and worst-case scenario, and while the Qantas jet showed damage to the engine's exterior cowling, there apparently was no serious damage to the airframe. Passengers spoke of loud noises and flames, but even minor malfunctions of a jet engine, such as compressor stalls, can manifest themselves through rather spectacular audio and visuals -- that's the nature of a jet and not, by itself, an indicator of anything catastrophic.

Which brings us to the second question: Why has this story garnered so much coverage? Rare as they are, engine failures are hardly unheard of and virtually always survivable. Every airliner is certified for flight with a failed engine. Certification standards guarantee adequate performance even with a failure occurring at the most critical moment of takeoff.  (For each airport -- indeed, each runway -- data are computed to assure not only the ability to fly, but to safely climb away, clear of any off-airport obstructions.) Once again we see the media seizing on a relatively minor event and giving it far more attention than it deserves. Once upon a time this story would never have made the news, but in the Internet age, practically every mishap involving a commercial jet, no matter how insignificant, gets a solid 15 minutes of infamy.

One factor might be the novelty of the airplane involved. The A380 is not only the newest, but also the largest commercial passenger jet ever built. (And also the ugliest, but that's another story.)

Qantas has temporarily suspended all A380 flights pending an investigation. Presumably this is to investigate any fleetwide pathology involving the Rolls-Royce engines powering its A380s. Although orders have been placed for around 200 A380s, fewer than 40 are currently in service, and it's not unusual for recently introduced models to suffer what might be called teething issues. This happened to the 747, some might recall, when it first began flying in the early 1970s. Such issues can be problematic, but are seldom dangerous -- one exception being the series of disaster that befell the star-crossed de Havilland Comet back in the late '50s. Other current operators of the A380 are Emirates, Singapore Airlines and Air France. These companies have not grounded their fleets.

Another factor is Qantas itself. This is the latest in a series of minor, if nagging incidents involving Qantas aircraft. None have been especially serious, but this is an airline whose own impeccable safety record is something of a two-edged sword. The 90-year-old Australian icon, known for its striking kangaroo tails and koala bear TV commercials, has not recorded a fatal incident since the early 1950s. The downside of this outstanding résumé is a tendency to over-focus on any small occurrence.

"Qantas," incidentally, is the name of a rare, winged Tasmanian marsupial known for its unique flying skills and longevity. Either that, or it's an acronym for Queensland and Northern Territory Aerial Services, founded in 1920.

FOLLOW-UP FROM THE AUTHOR:

The preceding commentary was written on Thursday morning, when details were still sketchy. I was going by what was known at the time. In fact the Qantas aircraft did suffer a fully uncontained engine failure and significant shrapnel damage to its left wing. Salon did not publish the story until late Thursday afternoon (Eastern time). Had I known about this lag, I would have submitted a revision.

On the whole, however, the gist of what I wrote above remains true: Yes, uncontained engine failures can be dangerous. Consider the fate of United 232, for instance -- the DC-10 that crashed in an Iowa cornfield in 1989 after a shattered engine disc took out all three of the plane's hydraulic systems. But usually they are not, and in this instance damage was minor. Was it deserving of news coverage, sure. But still not the coverage and hype it was given.

It turns out this is the third -- and certainly most dramatic -- incident involving an A380 engine anomaly. Engine-maker Rolls-Royce is currently in the hot seat.