Investors love the Fed's new plan to stimulate the economy. But everyone else gives it a big thumbs down 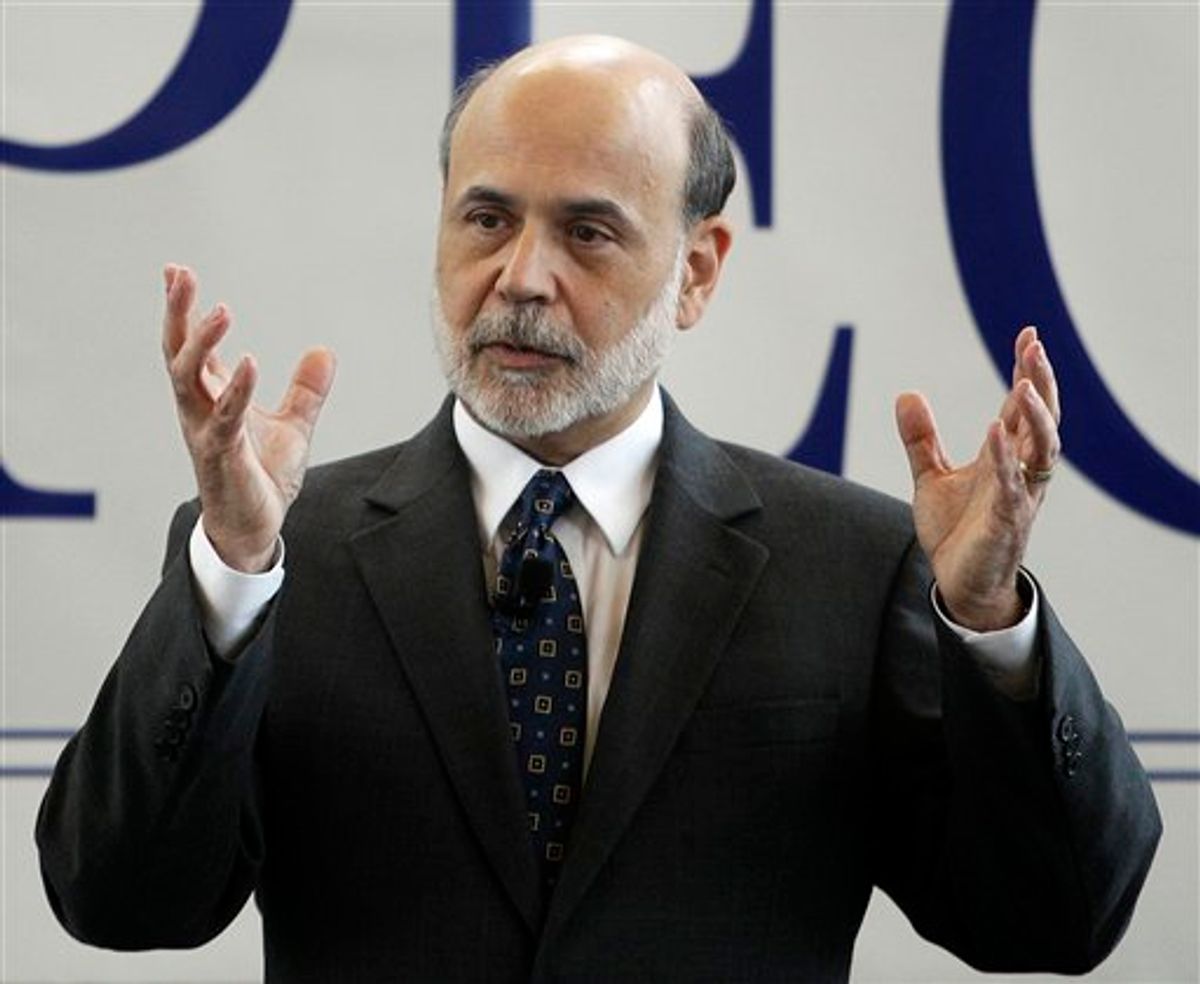 Excluding one rather important player, the reaction to the Federal Reserve's plan to lower unemployment and speed up economic growth by spending $600 billion to buy Treasury bonds over the next eight months -- a tactic referred to by monetary policy buffs as "quantitative easing" -- has been almost unanimously critical. There is little middle ground on this map. As the Economist noted, naysayers are dismissing the move as either "ineffectual or dangerous."

The left is split between those who believe the Fed's numbers are too small to do any good and those who believe, with good reason, that the beneficiaries will primarily be Wall Street instead of Main Street. Conservative critics tend to fear the inflationary or bubble-inducing prospects of magical money creation.

The only unqualified applause comes from the stock market. On Wednesday, the Dow Jones Industrial Average rose 219 points, closing at its highest level since the fateful collapse of Lehman Brothers. In fact, the upward momentum for stock prices in the United States over the last few months can probably be attributed simply to the strong expectation that the Fed would finally bestir itself into action.

Stock prices, indeed, are supposed to rise in response to announcements of quantitative easing. Ben Bernanke made this point very clear in an Op-Ed accompanying the Fed's announcement, published in the Washington Post:

This approach eased financial conditions in the past and, so far, looks to be effective again. Stock prices rose and long-term interest rates fell when investors began to anticipate the most recent action. Easier financial conditions will promote economic growth. For example, lower mortgage rates will make housing more affordable and allow more homeowners to refinance. Lower corporate bond rates will encourage investment. And higher stock prices will boost consumer wealth and help increase confidence, which can also spur spending. Increased spending will lead to higher incomes and profits that, in a virtuous circle, will further support economic expansion.

If you think you hear an echo of classic trickle-down economics psychology, you are not wrong. Yves Smith is her typical scathing self, calling Bernanke's formulation "the classic wealth effect argument, that if you goose asset values, people will feel richer and spend more." Smith says the experience of Japan over the past two decades proves that the tactic will fail.

Without doubt, there is an air of wishful thinking to Bernanke's rationalization. Mortgage rates are already at historically low levels. Corporations have zero problem raising money in the current climate -- they're just not willing to do anything with it besides buy back their own shares.

But quantitative easing should work, say others, if you just try hard enough. Joseph Gagnon, a former Fed economist, dug into the numbers and concluded that for every $1 trillion of Fed asset purchases, the unemployment rate could be lowered by 1 percent. But that means, as Brad DeLong observes, that as announced, the current Fed move will barely improve the jobs situation at all, even as it boosts the bottom line of stock market investors.

At the moment, conservative fears of inflation seem overblown -- they would only be borne out if the Fed started purchasing assets on a scale big enough to make a real dent in unemployment. Ineffectuality trumps dangerousness. But there is at least one reason to feel encouraged by the Fed's tentative return to action. We haven't heard much from Ben Bernanke about the problem of "unemployment" during his tenure as Fed chairman. His focus, along with his colleagues on the Federal Reserve Board of Governors, has always seemed more concerned with inflation. The fact that he is finally conceding that, by law, the Fed is mandated to seek full employment, gives liberal critics some leverage over future Fed policy. Because if unemployment doesn't go down in response to this round of quantitative easing, Bernanke will be backed into a corner. He'll have to do more.