Yes, it's the movie in which a man saws off his arm. But Danny Boyle's outdoor adventure is so much more 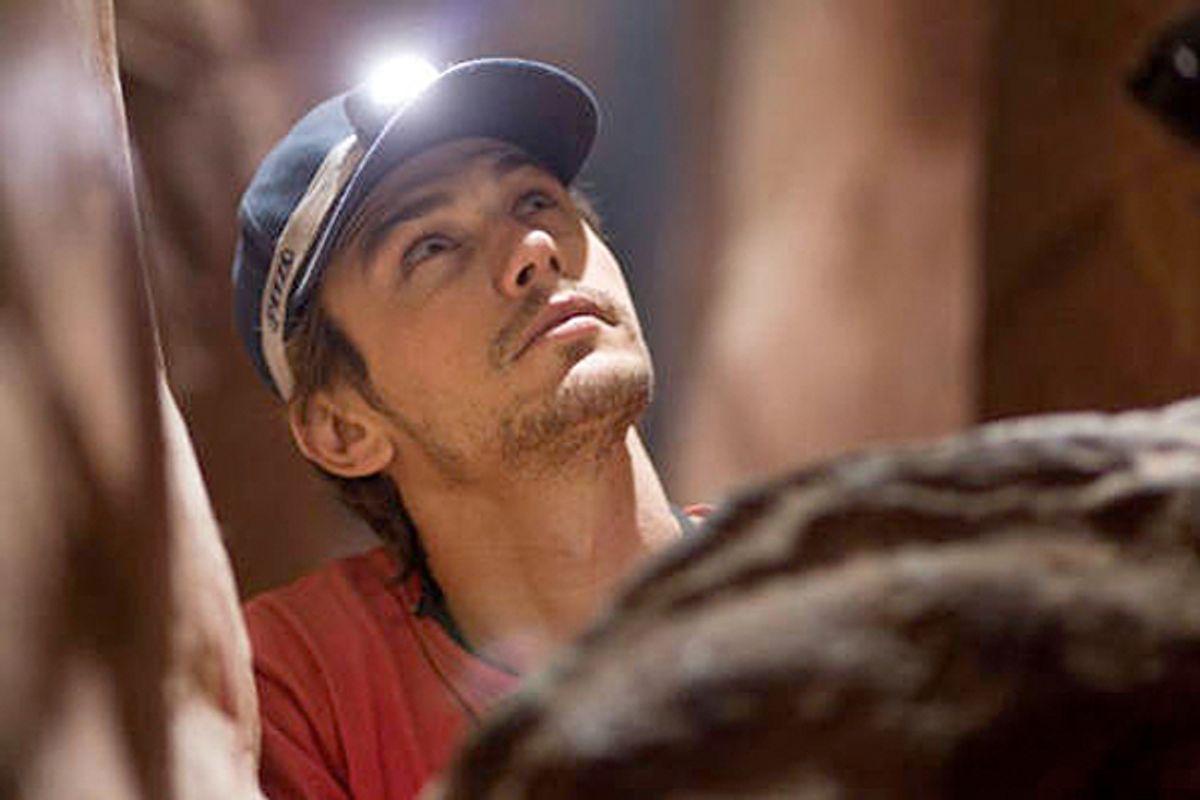 Danny Boyle's "127 Hours" presents itself to the public as Oscar-worthy independent cinema, a movie that bridges the gap between art-house drama and pure pop escapism. At least, I guess it does; Boyle and his collaborators have gone further than almost anyone else in contemporary film in erasing those boundaries. What I admire about "127 Hours" -- and at the same time, what makes me mistrust it -- is that it's a full-on thrill ride, meant to put its audience through an intense and even physical ordeal that parallels the one its main character must endure. It has more in common with "Resident Evil 3-D," or with a CGI-driven theme-park attraction, than it does with a sincere indie dramedy like "The Kids Are All Right." It's the only plausible Oscar nominee among this year's crop that's going to make people pass out during screenings -- a ritual celebration that began at Telluride and Toronto and shows no signs of abating.

I trust I'm not giving away too much at this point when I tell you that "127 Hours" stars rising actor-writer-21st century Renaissance man James Franco, who is on-screen for nearly the entire film, as Aron Ralston, the real-life rock climber who had to saw his own hand off to escape death in a remote Utah canyon. That scene is indeed delivered in memorable detail, with the appetite for the grotesque and the technical expertise that have become hallmarks of Boyle's career. But it's not enough to zap us with gross and grisly effects, or amp up the tension with brilliant sound work (although this film does those things expertly).

Boyle knows that the kind of postmodern thrill ride he's building here requires its pastoral passages, its zones of almost abstract beauty, its tripped-out hallucinogenic Zen space. A few years ago, Boyle looked like a hit-and-miss British oddball, nearly or actually washed up, who was making genre films on the margins as "Trainspotting" faded in the cultural rearview mirror. Today, after the multiple Oscar-winner "Slumdog Millionaire" and this movie, he is revealed as an evil genius of our age (and I say that with great affection), a hustler, huckster and showman of the highest order. I recently heard another critic describe Boyle as a "truly excellent whore," and I feel confident that Boyle would cackle with glee at that description, while pretending to take offense.

When I first caught the movie in Toronto, I expressed uncertainty about whether Boyle and his brilliant technical team, most of whom also worked on "Slumdog," had produced a "pop-spiritual masterpiece" or a spectacle of "self-indulgent wizardry." As I guess you can tell by now, I'm leaning toward option B -- but that doesn't mean I didn't enjoy it, or that you shouldn't see it. (In Boyle's world, as I failed to grasp the first time through, there's no dichotomy between those things. They're the same.) In fact, I'll retract "self-indulgent," since that's totally unfair. That suggests that Boyle, Franco, et al., don't seek to rock the audience's world, when making us laugh and cry, ooh and ahh, shriek and scream is nearly their sole concern. You could stick a lot of adjectives and adverbs on this film -- showboaty, dazzling, stupid, gorgeous, joyously cynical and cynically joyous, profoundly shallow and whatever the vice versa of that is -- but a movie about a guy trapped in a rock canyon that somehow drags in Scooby-Doo not once or twice but (I think) three times is not exactly navel-gazing.

Here's the guts of what I wrote from Toronto (with a few edits for clarity and context):

Although "127 Hours" could hardly be further away from the dense melodrama or Mumbai setting of "Slumdog Millionaire," Boyle reunites much of his technical team, including cinematographer Anthony Dod Mantle (sharing D.P. duties here with Enrique Chediak), Indo-disco-trance composer A.R. Rahman (delivering another workout-ready score) and screenwriter Simon Beaufoy (adapting Aron Ralston's memoir). And in some respects Boyle offers a similar visual odyssey, beginning with an explosive, sensual and almost fluorescent celebration of Aron's journey into the wilderness on foot and by mountain bike, prefiguring the internal psychic voyage that lies ahead.

Shortly after frolicking in a cave pool with a couple of chicks he's just met -- they're having a party later! Behind the diner! Just look for the giant inflatable Scooby-Doo! -- Aron winds up at the bottom of a canyon with a very large boulder crushing his right hand against the cavern wall. It's a momentary mishap, the kind of thing that could have befallen almost any hiker. A few inches in one direction, and he'd have walked away with bumps and bruises. A few more in the other, and someone might have found his bones the following summer, or the one after that.

There Aron stays for more than five days, since, brave and arrogant lad that he is, he hasn't told anyone exactly where he's going. This is a perfect opportunity for Boyle, in that he tends to treat his characters as research animals, and in "127 Hours" he pulls out all the stops. At first, as Aron focuses on staying alive and trying to find a way out, the movie strips down to essentials and becomes grimily, grimly realistic. Later, as the hours become days, and the water in his canteen runs out, Aron begins to realize that he has to use the last battery life on his camcorder to leave a testament. He's almost certainly going to die in this place, and his video diaries, talk-show-style interviews with himself, dreams, hallucinations, premonitions and memories take over the movie. Let's put it this way: Scooby comes back. More than once.

It's worth elaborating on the fulsomely entertaining performance of James Franco, who's up for every bit of Boyle's challenge. It's like an acting exercise, or a play staged by a handful of hipsters in a Brooklyn warehouse: Play a guy who's literally stuck in place, and make us love him, hate him, weep for him and fear for his sanity, by turns. Except that throughout "127 Hours," the filmmakers have the perfect excuse for every outrageous choice: This is how it really happened! (I don't think that explains anything, for the record.) Whether the immensely talented but overexposed Franco is going to get his long-prognosticated Oscar for this role I don't know, but I can't imagine he won't be nominated. He plays Aron as an ordinary American dude who essentially subdivides into multiple characters over the course of his ordeal, going from clownish outdoorsman and party boy to introspective chronicler of his own impending demise and visionary lunatic.

Aron's desert epiphanies suggest Augustine of Hippo, Hildegard of Bingen and Jim Morrison all rolled into one, and that stuff all happens before he decides to saw his own arm off (with completely inadequate hardware, I might add). That event is the climax of the thrill ride, I suppose, but Boyle understands that as with sex and gags and haunted houses, this kind of movie is more about the setup and the atmosphere than the delivery. There are only a few minutes of outright on-screen gruesomeness, and if people are really fainting during this movie, they're responding to the power of suggestion, not to what they're actually seeing. Is "127 Hours" a good movie? Depends what you mean by "good," of course, and also by "movie." It won't make my top-10 list or anything, but I do not imagine Danny Boyle cares about that. It's a big event, that much is for sure, and it's definitely worth paying Boyle a nickel to peek inside his tent. Does anything else matter?