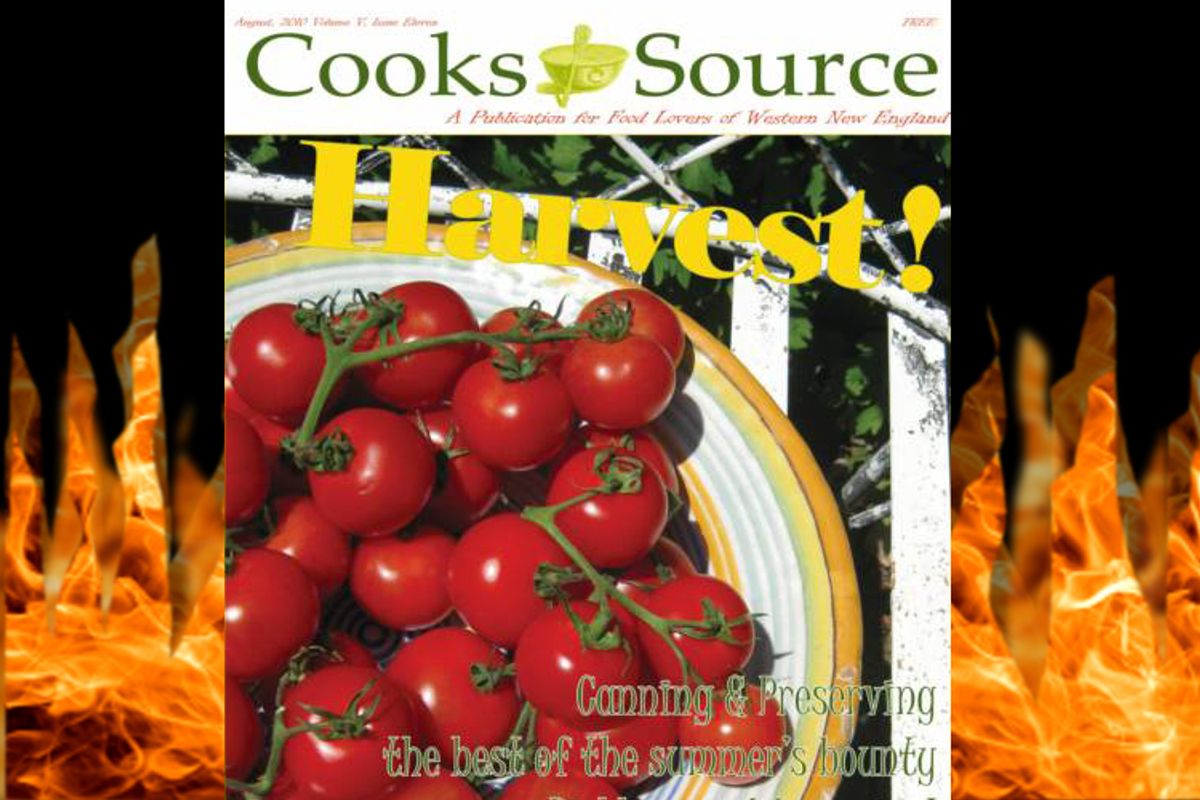 For all the bullying, wing-nuttery, and tin foil-hattedness on the Internet, its denizens still regularly manage to rally around and support each other – especially if it involves giving the pompous a virtual pantsing. Such is the case of writer Monica Gaudio, who was surprised to learn this week that the small culinary magazine Cooks Source had lifted her five-year-old story for medieval cookery blog Gode Cookery entitled "A Tale of Two Tarts" wholesale for its recent Pumpkin Fest issue. Cooks Source epic mistake number one: taking work without compensating or even contacting the writer.

Gaudio contacted the magazine via e-mail, and when editor Judith Griggs asked what she would like her to do for her, she replied, "I responded that I wanted an apology on Facebook, a printed apology in the magazine and $130 donation (which turns out to be about $0.10 per word of the original article) to be given to the Columbia School of Journalism."

What she got instead was this: "Yes Monica, I have been doing this for 3 decades, having been an editor at The Voice, Housitonic Home and Connecticut Woman Magazine. I do know about copyright laws. It was 'my bad' indeed, and, as the magazine is put together in long sessions, tired eyes and minds somethings forget to do these things. But honestly Monica, the web is considered 'public domain' and you should be happy we just didn't 'lift' your whole article and put someone else's name on it! It happens a lot, clearly more than you are aware of, especially on college campuses, and the workplace. If you took offence and are unhappy, I am sorry, but you as a professional should know that the article we used written by you was in very bad need of editing, and is much better now than was originally. Now it will work well for your portfolio. For that reason, I have a bit of a difficult time with your requests for monetary gain, albeit for such a fine (and very wealthy!) institution. We put some time into rewrites, you should compensate me! I never charge young writers for advice or rewriting poorly written pieces, and have many who write for me... ALWAYS for free!"

Let's just call that e-mail Griggs's epic mistake numbers one through zillion: the blatant misunderstanding of the concept of public domain,  the insulting the work of the person she'd stolen from, the "at least we didn't plagiarize" defense, and the real kicker, the absurd, Ginni Thomas-style "No, you should compensate me!" business.

Deciding that a payment in the form of shoddy reasoning and dismissive snark was unsatisfying, Gaudio then did what so many little guys have done when in the face of rudeness and stonewalling. On Wednesday, she crowdsourced it, with a brief blog recap of the whole ugly story and an invitation that "I have some ideas of where to go from here but I am more than willing to listen to other suggestions."

That's all it took. What began as a few comments advising her to get some good legal counsel quickly snowballed as the collective outrage moved off Gaudio's LiveJournal page and onto – where else? – Facebook and Twitter. Suddenly the little magazine's Facebook page was accumulating new "fans" like a warm apple pie attracts scoops of vanilla ice cream. Let the hilarious public shaming commence!

What had perhaps once been a basic fan page and – too bad for Cooks Source – online version of the magazine/damning evidence of its bad behavior – has now become the virtual stockade. A torrent of smackdowns for the editor's bad behavior has been steadily raining down. But more than just expressing indignation, enterprising Facebookers have quickly compiled a list of the magazine's advertisers, the better to contact them about its dubious practices. They also cleverly deduced that Gaudio was unlikely the only writer they'd ever pulled this stunt with. While you can't copyright lists of ingredients, thankfully you also still can't flat out steal other people's work. Sure enough, when Facebookers combed the online pages of the magazine, they found dozens of examples of articles and photos, lifted from Weight Watchers, Food Network, Martha Stewart, Sunset and NPR among others. Oh God, they are so hosed.

Griggs has not made any public statement on the brouhaha, but it's obvious somebody's reading -- you'll be stunned to learn that Gaudio's article has magically disappeared off Cooks Source's Facebook page. Too bad for them they didn't pull all of the magazine's articles.

The exposure of its disrespectful business practices and direct contempt for writers is bad enough for Cooks Source, but just as damningly, the Internet community has really kneecapped Griggs and company by rendering them utterly ridiculous. Its Facebook page now is mostly a litany of devastating snaps. "Cooks Source rides a segway to work." "Cooks Source told everybody the Neiman-Marcus Chocolate Chip cookie recipe." "Cook Source told George Lucas to do everything he's done since the 90's." "Cooks Source killed Apollo Creed." And my favorite: "Cooks Source doesn’t use apostrophes." There are also now fake Twitter feeds for the magazine and Judith Griggs, and they are snotty as all get out.

For the many of us who care about professionalism, courtesy, and generally not being a raging tool, the anger at Griggs and Cooks Source is understandable. And the swiftness with which astute observers were able to uncover its other terrible practices is admirable. But to be able to turn something so wrong into something so addictively funny, to render it so entertainingly foolish? That's the heart and soul of online community – coming to the defense of one badly misused individual and not just turning her plight into a worthy cause, but a celebration of all that's whimsical and silly and non-jackassed. Gaudio may never get that $130, but what she – and all of us who've been watching along with her – have received is a different and in many ways greater victory. It tastes mighty sweet.

UPDATE: In response to the blistering outpouring on its original Facebook page, it appears Cooks Source has launched a brand new one. Proving again a stunning lack of familiarity with common Internet terms, the moderators declare it "a new page as the last one was hacked." As one commenter explained, "We're not hacking we are hating!" They further fanned the flames by posting, "There's lots of people here that do not seem to understand a few basics yet they seem to all be experts in the print business." In just a few hours, the new page has racked up hundreds of posts, most of which are more scathing than ever. Guess if you're going to run a food magazine it helps to be a glutton -- for punishment.