Pelosi tweets: I want to stay 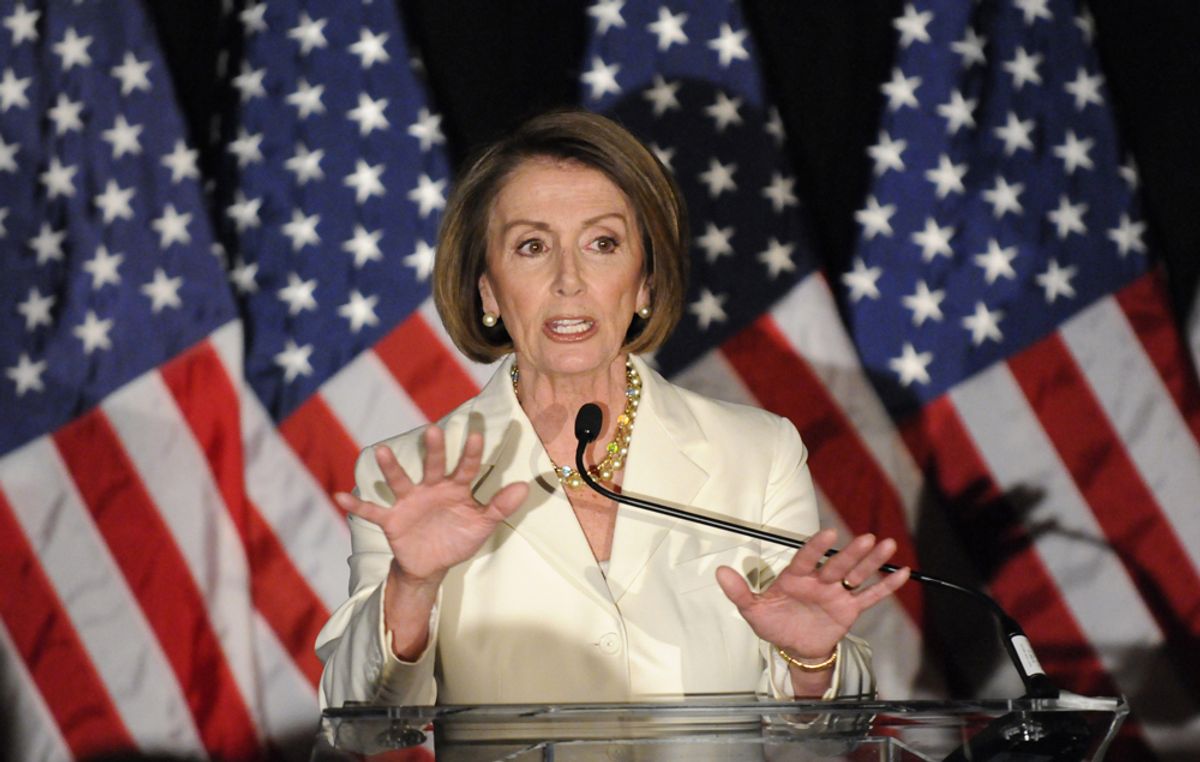 [Updated] My election night eulogy was premature: Nancy Pelosi has just announced, via Twitter, that she intends to stay in Congress and seek to retain her post as the top House Democrat:

Driven by the urgency of creating jobs & protecting #hcr, #wsr, Social Security & Medicare, I am running for Dem Leader.

If she succeeds, and it's likely that she will, Pelosi will become the first speaker since Republican Joe Martin in 1954 to move from speaker to minority leader after an election. In the run-up to this week's midterm, in which Democrats lost at least 61 seats, it was widely assumed that the 70-year-old Pelosi would step down as party leader and retire from Congress if Democrats lost their majority -- the same course that her immediate predecessor, Republican Dennis Hastert, followed back in 2006.

So why is she staying? The obvious answer is that she's not ready to get out of politics. So if she wants to stay in the House, why not play a meaningful role? As I wrote on Thursday:

Given the right's venomous demonization of her, you can imagine the satisfaction that Pelosi would take from leading her party into the 2012 election and somehow winning back the majority. But it's not likely that she, or any Democratic leader, will be able to engineer such a quick turnaround, given that so many of the seats that the GOP won back this week were in districts that voted for John McCain in 2008 or where Barack Obama's margin over McCain was narrow -- the kinds of districts that Democrats can't really win unless Republicans are in control of Washington and voters are upset (like in 2006 and 2008). Democrats can certainly make gains in 2012 -- as they did in 1996, two years after the Gingrich "revolution" -- but enough to take back the House? It's hard to see. Still, the idea of achieving such vindication two years from now, however unlikely, could be part of her current calculations.

The question now is who will challenge Pelosi for the minority leader's slot. The most obvious candidate is Steny Hoyer, the current majority leader and Pelosi's longtime rival. They vied for three years in an on-again/off-again leadership battle that resulted in a 118-95 Pelosi victory in October 2001 -- but the fight hardly ended there. When Democrats took back the majority in 2006, Pelosi's first act was to try to flush Hoyer out of the leadership, aggressively backing John Murtha's effort to supplant Hoyer as the Democrats' No. 2 leader. Hoyer won handily -- thanks in part to support from many of the centrist members elected in the '06 wave.

Hoyer publicly said this week that he would pursue the minority leader's slot if Pelosi stepped aside. But will he challenge her for it? He'd find support from moderate and conservative members, his natural constituency within the Democratic caucus, but it was moderates and conservative members who lost disproportionately on Tuesday. Hoyer's base had eroded. He'd need to make up for it by attracting more traditionally liberal members who simply want a new public face for their party after Tuesday's drubbing.

It's also worth wondering whether Pelosi has actually been strengthened by Tuesday's verdict. With so many Blue Dogs losing, liberals make up a much bigger share of the Democratic caucus than before. Could she now have the numbers to flush Hoyer from the leadership altogether? The No. 3 House Democrat, South Carolina's James Clyburn, has said he has no plans to challenge Hoyer -- but Clyburn was clearly (like everyone else) expecting Pelosi to leave and for Hoyer to succeed her; he was positioning himself to move up to Hoyer's No. 2 slot. Might Pelosi now convince him to take a run at Hoyer? Or maybe John Larson, another Pelosi ally and the No. 4 House Democrat, will make a bid. Or someone else.

There's also a chance that stability will prevail -- that Hoyer will refuse to challenge Pelosi and that, in return, she'll resist taking him on. Under that scenario, Pelosi would face a token challenge from one of the remaining Blue Dogs -- Heath Shuler of North Carolina, perhaps -- for the minority leader's job. But the purpose of such a challenge would be symbolic -- to allow Blue Dogs to tell their constituents they didn't vote for Pelosi. It would be akin to the futile challenges that conservative Democratic Reps. Charlie Rose and Charlie Stenholm launched against Richard Gephardt and David Bonior after the Democrats' 1994 House drubbing.

Update: Per Hotline's Reid Wilson, Hoyer's office is saying that he will "spend the next couple of days talking to members" about running for minority whip, which will be the Democrats' No. 2 post in the next Congress. That could put him on a collision course with Clyburn, who is the current majority whip. And if Clyburn were to seek the next post down the totem poll, he might then be on a collision course with Larson, who is now the Democratic caucus chairman. Below Larson is Xavier Becerra of California, who is now the vice chairman of the caucus. The issue here is that there are five leadership slots on the majority side, and four on the minority side. So if Pelosi stays around as leader, one of the four Democrats immediately below her will have to leave the leadership.