The painful misadventures of a well-endowed breast-feeder

I never liked having big boobs, but I thought it would make me a more natural mom. Boy, was I wrong 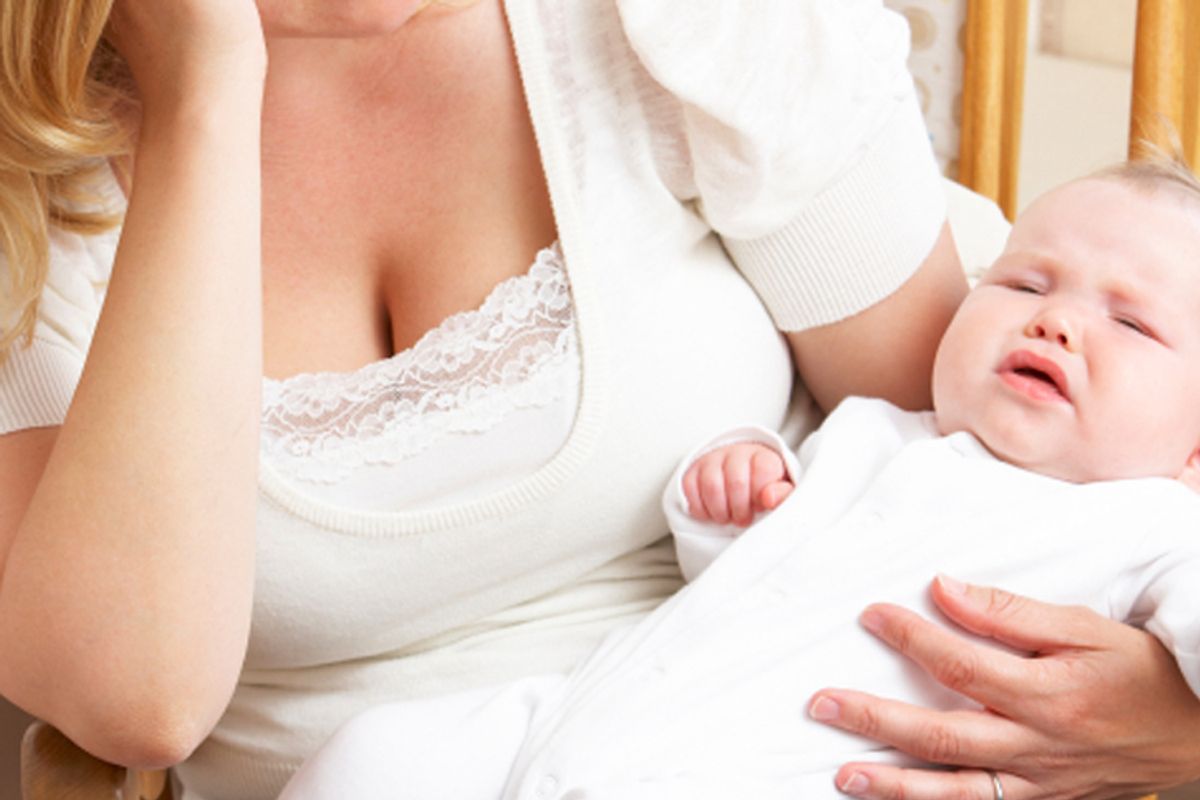 It takes my two girls about an hour to feed my little boy, 12 times a day. He rouses fitfully at 3:31 a.m. and begins gumming away at the saucer-size areola of one of my gigantic breasts. We know the drill by now: He pulls off, screams, I put him back on. He pulls off, cries, I latch him back on. Frequently, I hand him off to my husband and hide my face in my hands. It is not the divine process I imagined it to be, this feeding by breast. I am ashamed to think -- often -- that it is rather boring. I marvel that some women can read a book while breast-feeding, or cut fingernails -- the amazing multitasking of mothers! -- but I am not that woman. I am a woman with colossal breasts -- and I cannot breast-feed right.

When it comes to the injustice of defining people by their most prominent body part, I understand the large-breasted woman is arguably the least sympathetic. She is well-endowed, chesty, buxom, curvaceous, shapely, stacked. No one pities her the backaches, or the bra welts in the skin of her shoulders, or the foreign hands inadvertently brushing her boobs because, my, they're just so out there. But as a large-breasted woman, I never wanted my boobs to take center stage. I have been trying to hide them since I was 12, when they exploded from my chest into a C-cup, leaving stretch marks on the sides like pale fireworks. I wore turtlenecks and necklaces, affected a Quasimodo posture to avoid catcalls. As a teenager, I skipped fashion trends (baby-doll dresses?), gave up on sports lest I smack myself too hard in the chin. But even then, I understood these frustrations to be laughable pit stops on the way toward my breasts' true purpose: nursing a child. I was destined to be a fabulous hippie earth mother, gloriously round, my body filled with intention.

And gloriously round was right. This pregnancy inflated me to a size unknown and uncharted. I've gained 50 pounds, but it's the top-heaviness that irks me. My breasts have become so large that I can feel them in my armpits. In pictures of my son nursing, his head is an apple shined up against a cantaloupe. I was measured at Nordstrom for a nursing bra, and my stomach dropped when the nice woman with the measuring tape informed me that my DD cups expanded to a 34H. As in, 34Humongous. As in, 34Horrific.

Yet out of these stupefying breasts, milk hardly comes. It comes, but it isn’t enough. I consult a lactation consultant -- actually, I consult five -- and every trip brings more bad news. One consultant explains that Dash is a "snacker," who spends a lot of time with his little mouth moving, and pulling off, but he doesn’t get a lot of milk. It's not his fault; my breasts just aren't producing much. So Dash is gaining weight, but too slowly. At some point during this cycle of meetings, one consultant cocks her head plaintively and says the one word that has been anathema in my house. The f-word. She whispers it in an embarrassed and loving hush while taking my hand in hers:

"No bottles," I say, and latch that baby back on my giant breast.

Throughout this process, I discover a surprising and frankly disheartening fact: The size of the breast has absolutely nothing to do with the ability to produce milk. After years of bristling at other people's silly stereotypes about my chest, I realize I have fallen victim to my own. Indeed, having big boobs can actually impede breast-feeding. The breast sometimes becomes so cumbersome as to require a second hand to hold it up. I do this with my son, as if offering a plate of ambrosia to a tiny despot. And there are other complications as well. Large-breasted women tend to get more skin irritations in the folds under their breasts. They are prone to developing breast pain and clogged ducts. (I write these facts as if I'm drawing on science, but really, it's from personal experience.) In fact, the only nursing advantage I've found is that it's possible to lay on one’s side and nurse – as your breast, and your baby, lie next to you. It looks very much like the suckling pig tableaux at the Iowa State Fair.

Over months, my resolve and patience begin to wear down. Every position Dash and I try doesn't work. So, I take to the pump. I follow a grueling feeding schedule of nursing 10-12 times a day and immediately pumping afterward each time. If you do the math, you will realize this allows for roughly one half-hour of sleeping for each nursing session.

"I really think you should consider joining our support group for breast-feeding moms who are having some trouble," our latest consultant tells me.

I know why she says this. She says this because the No. 1 determinant of whether a woman is successful at breast-feeding is not her willpower, or her maternal instinct, or the size of her breasts -- it's receiving the right support from the people around her.

"Screw that!" I tell my very supportive husband that night. "I don’t need a support group."

Over the next few weeks I throw everything I have into nursing. No making dinner, no cleaning, no reading, no watching television, no disillusions about being productive. That’s all Dash and I do. Just hours and hours of nursing.

And eventually -- it works. Dash plumps out. He grows an an adorable middle-thigh roll of fat. Four months after giving birth, we finally find the groove.

At nearly a year now, breast-feeding Dash seems almost laughably easy, like reaching for a potato chip. As each month passes, his golden head grows larger and my breast looks, why yes, like a small halo around his head. I am awash in the glow of breast-feeding hormones. I have become the worst kind of addict, sometimes waking him up to feed him before I go to bed myself.

It turns out I am not the natural earth mother I thought I was destined to become. But looking back at those never-ending nights, the constant crying, the raw nipples and pumping fiascoes, I see with the clarity of hindsight what I really needed all along was something different: patience. It's what all mothers have to learn -- not just with breast-feeding but with everything. Patience with the world, patience with their kids, patience with themselves.

Dash is still a snacker; he suckles and then does a baby sit-up for a grand total of .34 seconds before throwing himself back at the nipple. I let him do it. He has good aim. (And it’s a pretty large target.) I hope, long after we’re done breast-feeding, that he always does this -- throwing himself out into the world, coming back to me.