Another Democratic Congress? It could be awhile

If you're hoping for a quick turnaround in 2012, you might be disappointed 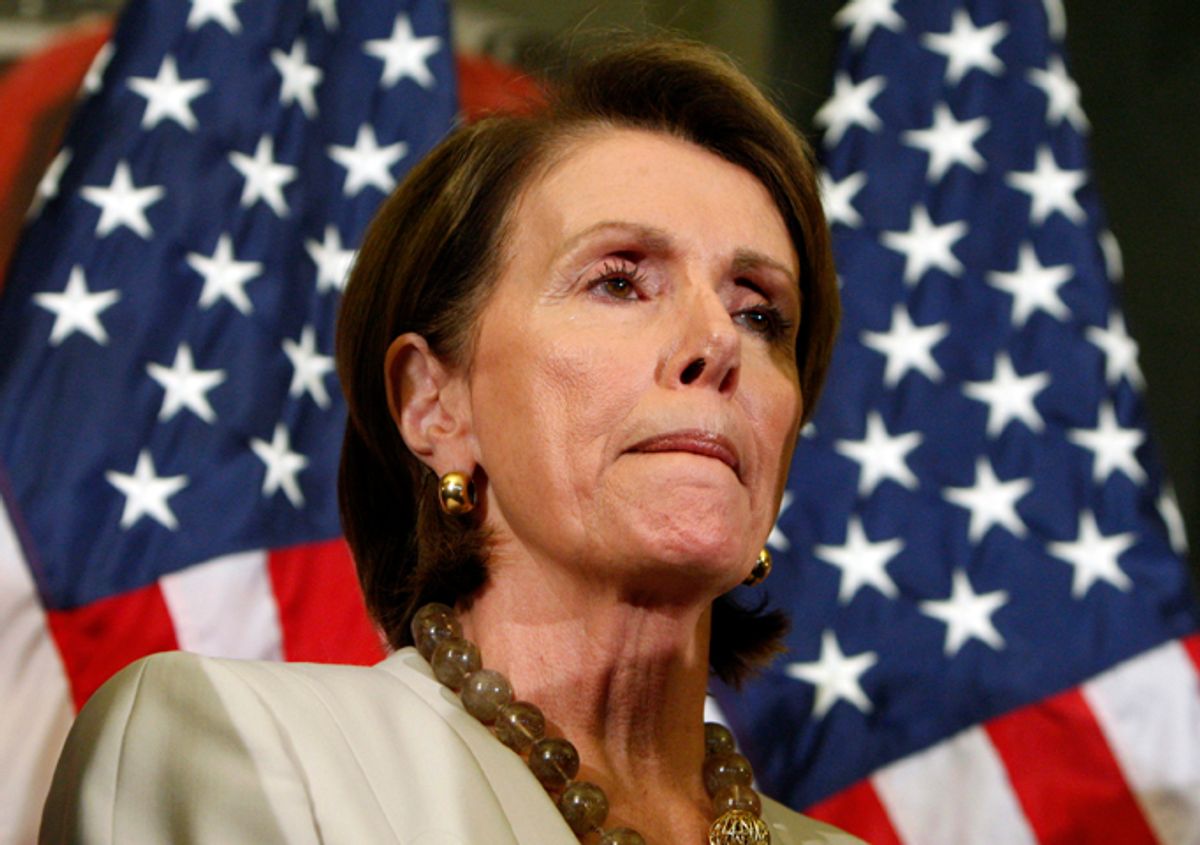 To everyone's surprise, Nancy Pelosi wants to return as the Democrats' leader in the next Congress. But if she's hoping for a big Democratic year in 2012 that would give her the speaker's gavel back, she might want to look closer at Tuesday's results: Based on the breadth and scope of their losses, it is going be almost impossible for Democrats to retake the House in the next 10 years.

While Democrats’ historic loss of at least 61 seats (results are still pending in a handful of districts) can be traced to a diverse set of factors, the majority of the Democrats defeated were either elected to Republican-friendly seats in the wave elections of 2006 and 2008 or were long-term incumbents who represented heavily GOP districts. The seats in that latter category are likely gone for good, while many in the former are clustered in a handful of states where GOP state-level gains will ensure that they are fortified in next year’s redistricting trials, making them even more difficult for Democrats to take back than they were entering the '06 and '08 cycles.

The losses of Democrats like Rick Boucher (southwest Virginia coal country), Lincoln Davis (increasingly conservative central Tennessee), Chet Edwards (College Station, Texas), Jim Marshall (Macon, Ga.), Earl Pomeroy (North Dakota), Ike Skelton (the Ozarks) and Gene Taylor (Biloxi and Pascagoula, Miss.) are particularly painful for Democrats, given the treacherous political terrain they face in those districts. Democrats were incredibly lucky to hold these seats as long as they did, and they were able to because incumbents like Skelton (elected in 1976), Boucher (1982), Taylor (1989), and Edwards (1990) had adeptly burrowed themselves in. Democrats were always going to lose these seats when these representatives stepped down, but the tidal wave of 2010 washed them all away in one fell swoop.

Put another way, of the 20 most Republican-leaning House seats held by Democrats on Election Day, 17 of them fell. With Partisan Voting Index scores ranging from R+9 in Stephanie Herseth-Sandlin’s South Dakota at-large district to an unfathomable R+20 for Edwards’ Texas seat and Taylor’s south Mississippi district, it's a miracle Democrats held these seats for as long as they did. Altogether, Democrats dropped 25 seats this week with PVI ratings of R+6 or more. It’s difficult to envision the party winning many of these seats back in the short- or long-term future.

Looking at Tuesday’s results from another angle, around two-thirds of the seats Democrats lost were held by members elected in the '06 and '08 elections. With a small handful of exceptions, nearly all of these districts are Republican-leaning, though most not overwhelmingly so. They represented the spoils of Democrats’ own wave elections. As currently drawn, many of them could theoretically be competitive in 2012, but Republican state legislative and gubernatorial gains could help the GOP use the forthcoming redistricting to fortify many of them.

New York, Ohio, Pennsylvania and Florida, where approximately one-third of Democrats’ overall House losses occurred, are potentially prime targets for this. With Republicans winning back both the governorships and state legislative chambers in Ohio and Pennsylvania, they will have carte blanche to strengthen the lines of the seats Democrats just lost through 2020.

Republicans in Pennsylvania attempted to do this last decade, but they miscalculated and spread themselves too thin -- leaving several Republican members of Congress vulnerable in the Democratic tide of '06 and '08. Don’t expect to see the same mistake twice, though. Look for the new GOP map-drawers in Harrisburg to fortify the lines of the Erie County-based 3rd District and the suburban Philadelphia districts that Democrats Pat Murphy and Joe Sestak have represented. Even the traditionally Democratic Scranton district of 13-term veteran Paul Kanjorski might be altered in order to protect Lou Barletta, the Republican who ousted Kankorski this week. There's also the 12th District, where Democrat Mark Critz survived Tuesday's massacre; but with the state due to lose a House seat next year, expect Critz’s district to be carved up in short order.

Similarly, with Republicans now in full control in Ohio, the five seats Democrats just lost based around Cincinnati, Columbus and Canton, along with the seats in the east and southeast being given up by the vanquished Zack Space and Charlie Wilson, will be strengthened by the GOP to keep them in the party's column for the next decade. And with the census chopping off two Ohio districts, a couple more House Democrats will likely be in the cross hairs next year.

In New York, the situation is a bit different, as Democrat Andrew Cuomo was easily elected governor. But Democrats are in enormous peril of losing the state Senate, a development that would prevent them from imposing favorable lines that would help them reclaim the five districts they just lost (and maybe more -- Republicans lead incumbent Democrats in two outstanding races in the state). And while Florida's governorship and state legislature will remain in Republican hands, the passage of a state constitutional amendment that seeks to make it harder to draw partisan gerrymanders could be helpful to Democrats. But it's questionable whether it will drastically affect the current lines to their benefit. With the loss of four Democratic seats, the state delegation now sits at 19-to-6 in favor of Republicans. And even with Florida gaining two new seats next year, expect little turnover in the near future, as Republicans will seek to insulate their freshly-won seats.

Furthermore, Republican state legislative gains in Colorado, Indiana and Texas could also strengthen newly-won GOP seats -- this is especially true for two new GOP prizes in South Texas. In California, the passage of Proposition 20, which removes redistricting power from the Legislature and awards it to a nonpartisan commission, couldn't have come at a worse time for Democrats, with Jerry Brown winning the governorship this week.

It's just hard to see how Democrats will be able to score the broad gains they'll need to win back their House majority any time soon. It might just be another 12-year wait.