"Fair Game": Ready for a Bush-era flashback yet? 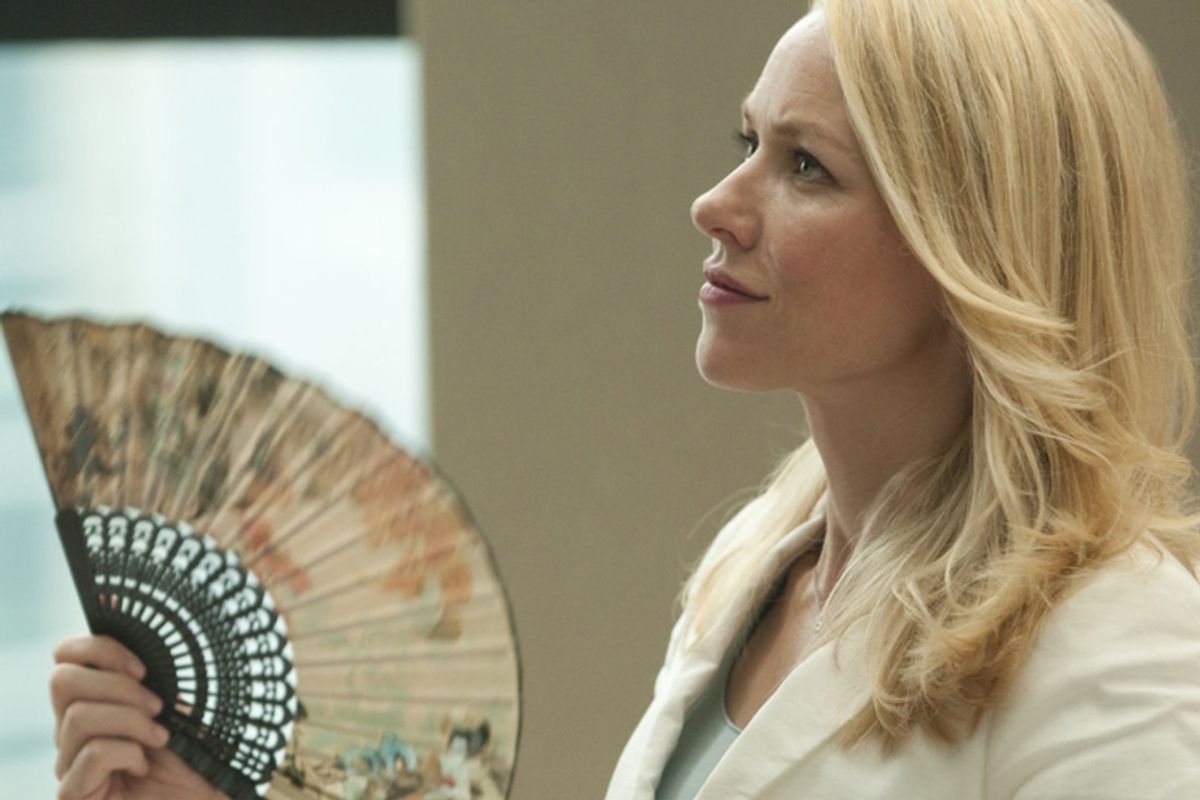 Well, so maybe November wasn't the perfect month to roll out "Fair Game," director Doug Liman's handsome mixed-bag drama about the Valerie Plame affair and the Bush administration's war buildup, which stars Naomi Watts as the defrocked CIA agent and Sean Penn as Joseph Wilson, her ex-diplomat husband. Recent history, especially when it's this unpleasant, is often a pretty tough sell in the movies. And the filmmakers' efforts to turn l'affaire Plame into a rousing, Capra-esque populist fable were ruthlessly undercut earlier this week, with powerful evidence that We the People are incapable of learning anything from any kind of history, and just lurch from one pole to the other like drunken rats in an electrified maze.

Liman can insist all he wants that he didn't mean to make an agenda-driven political drama, but "Fair Game" will clearly play best among perennially outraged, left-leaning metropolitan viewers (who are pretty much the audience for this kind of Oscar bait in the first place). As I wrote after the film's Cannes premiere, I think the film's quasi-inspirational conclusion is at odds with the darker and more fatalistic sermon that it's preaching under the surface. But it's well worth catching, and both Penn and Watts are likely to be players in this winter's Oscar race. Here's most of my review from last May (edited slightly for context and clarity), along with some press-conference quotes from Liman and Naomi Watts.

Travel with me now back to the glorious days of 2002 and 2003. Remember what a great time it was? The Bush administration lied to us over and over again, on a vast scale, about the reasons it was going to war in Iraq, and the media repeated it all with the deep and sincere conviction of robots trained as Method actors. Massive international protests, among the largest in history, accomplished nothing. When the White House was called on its lies, it set out to bulldoze those who were telling the truth.

What's that you say? You don't want to go? Everything about that dismal epoch makes you want to drink absinthe until you vomit? Therein lies the problem for "Fair Game," an engrossing and briskly paced drama that stars Naomi Watts as Valerie Plame, and Sean Penn as her husband, former American diplomat Joseph Wilson. (The screenplay by Jez and John-Henry Butterworth is based on Plame and Wilson's memoirs.) To care about this unusual and highly sympathetic central couple, one must risk reawakening all the painful emotions surrounding America's ill-fated rush to war in Iraq, very likely a top-10 entry on the list of Things This Country Has Really Fucked Up.

"Fair Game" was directed by Doug Liman, a talented filmmaker who's spent his career bouncing between independent films like "Go" and Hollywood projects like "The Bourne Identity," without quite finding his métier. He told us at the press conference after the Cannes premiere that he's been trying all along to make movies that are both entertaining and meaningful, and he's accomplished that pretty well here. Especially during the early scenes, when we learn a little -- admittedly not much -- about what Plame did as a counter-proliferation specialist trying to interdict or intercept sales of nuclear-weapons technology, "Fair Game" is a gripping yarn of 21st-century espionage, more realistic and vastly less pornographic than TV's "24."

Liman is no political naif. His father, Arthur Liman, was a prominent New York and Washington attorney who worked on high-level official investigations, including the congressional inquiry into the 1980s Iran-Contra scandal. I'm guessing he knows that "Fair Game" isn't really the Frank Capra-style inspirational yarn it pretends to become during an abrupt third-act reversal. It's a fable of power, politics, truth and lies, all right, but when the film itself is telling maximum truth it's much murkier and more fatalistic than that.

How does the story end, after all? Plame and Wilson survived their ordeal, and this is the story of a troubled marriage between two strong personalities as much as anything else. They have left the world of power and intrigue behind, probably forever, and are raising their kids in New Mexico. Scooter Libby, an aide to Dick Cheney, briefly went to prison for perjury and obstruction of justice related to their case (until Bush commuted Libby's sentence). But the news media, once again, was successfully distracted from noticing not only that they'd been lied to -- which is normal -- but also that they had lapped it up like a big, happy pile of puppies. And do we really believe that ideology now has less of a distorting effect on intelligence gathering, policy decisions or the perception of reality, under President Obama or President Palin or any other future leader you care to imagine?

Wait, don't answer that. Let's talk about the movie instead. Penn and Watts are well matched as this improbable couple, and together they build a complicated and human portrait of a marriage: They are guarded with each other, still in love yet perennially a little bit at war. Both actors are skilled at the challenge of impersonating a living individual without simply mimicking them, and the resemblances are astonishing.

As Liman said at the press conference, the real-life Valerie Plame Wilson is an "incredibly private person" whose best friends didn't know she was a covert agent. She was regarded as one of the CIA's toughest and best, who had graduated first in her class at "The Farm," the facility where covert agents are trained. She traveled the world under "non-official cover," posing as a financial analyst for a private firm. Among other things, this meant that the agency would deny any knowledge of her activities if she were captured.

As Naomi Watts put it, "She's a complicated woman who had an incredibly important job, and it was definitely a challenge for me to get the essence of who she was. The closer I got to her, which took some time, the more I understood that she still operates like a covert agent. I wanted her to tell me as much as possible about what she had done, but there was still lots of stuff she couldn't talk about.

"I didn't get Valerie all at once," Watts continued. "She's quite a woman -- more of a woman, I think, than I've ever played before. I've often been drawn to playing roles of women who are dealing with psychosis, at least since I worked with David Lynch. But this is a woman who overcomes her psychosis, partly with the help of her amazing husband. She's so cool and calm and collected, and sometimes I wanted to pump up the drama or make her more emotional. But that really is not who she is."

As we see in the film, only Plame's husband and her parents had known what her real occupation was. Her supposedly close friends in suburban Washington read about it in the newspaper when her identity was leaked. "Not only was she betrayed," Watts said, "but in a sense she was betraying other people."

To prepare for the role, Liman asked Watts to take a two-day, stripped-down version of the training course for covert agents, which included being hooded, beaten and interrogated with various techniques. "Doug told me, 'Toughen up, lady,'" Watts laughed. "It helped me to understand that while Valerie is very feminine, very calm, she has this other side we don't know about."

Wilson, a retired United States diplomat who had served in Iraq and Africa, is something quite different, an "extroverted, larger-than-life character," as Liman puts it -- exactly the sort not to keep his opinions to himself, even when expressing them might endanger his family. "Sean hung out with Joe Wilson every day during the shoot," Liman said, "and you could watch him becoming more and more like Joe. It was like watching a horror movie! Joe's personality was being sucked out of him, and it was going into Sean."

As long as the action bounces around from Kuala Lumpur to Amman to Cairo to Baghdad to CIA headquarters, with occasional stopovers in the Wilson household in the leafy D.C. suburbs, Liman is in his element. It may help that the Butterworth brothers are not American and came to this complicated story as outsiders. They've written it as a well-structured political thriller, balancing action beats and relationship moments in careful measure. But the central drama here, of course, is what happens after Wilson goes public (in a now-infamous New York Times Op-Ed) with his view that the Bush administration was exaggerating, if not falsifying, the evidence for war with Iraq.

Just to review: Wilson knew to a near-certainty that Saddam Hussein had not tried to purchase uranium "yellowcake" from Niger, as the administration alleged -- because he was the guy the CIA had sent to Africa to check out the story. And, to repel any leftover incoming right-wing missiles: 1) Plame was an extremely valuable CIA operative, not a minor player; 2) she suggested Wilson for the Niger trip, but didn't make the decision to send him; 3) he was definitely qualified, as one of the very few Americans who knew that obscure African nation well; and 4) he didn't get paid anything.

As we now know, Dick Cheney's office attacked Wilson, and Plame's covert identity was leaked to columnist Robert Novak, apparently by then-Deputy Secretary of State Dick Armitage. Novak may not have understood that publishing her name was against the law, but either way her undercover career was over. This was undoubtedly a central drama in the couple's life -- Wilson became an antiwar activist, Plame struggled with depression and they briefly separated -- but it's tough to dramatize without relying on hackneyed movieland devices. Plame has an expositional heart-to-heart with her Air Force retiree dad (a nice cameo for Sam Shepard) and then comes home to utter the line: "They're not going to take my marriage!"

There was actually a smattering of boos amid the polite applause after "Fair Game's" press premiere. Maybe that was because the film loses dramatic energy in the last half hour, but more likely it was non-American viewers, reacting to the Butterworths' attempt to pin a patriotic, call-to-arms tail on their donkey at the last possible moment. At the press conference, Liman ducked a question from an Iranian journalist about whether the international case against Iran's nuclear program is built on a sounder footing than the Bush case against Iraq. He's not qualified to answer that, and the real-life Valerie Plame Wilson is way too cagey to go there.

When a female Arab reporter asked Liman a long follow-up question about whether he meant "Fair Game" as a rebuke to the complacent and compliant American media, he opened up a little more. "I'm not trying to be that opinionated," he said. "I'm trying to convey what it was like in America at that time. This isn't 'Countdown to Zero' or 'The Cove,' where I want you to come out of the movie with a particular position. This isn't advocacy filmmaking." But on the other hand, maybe it is: "I mean, I understand how it happens that the media just parrots what the White House says. That's how they get access. I'm not sure how that ever changes."