Can liberalism save capitalism from conservatism? 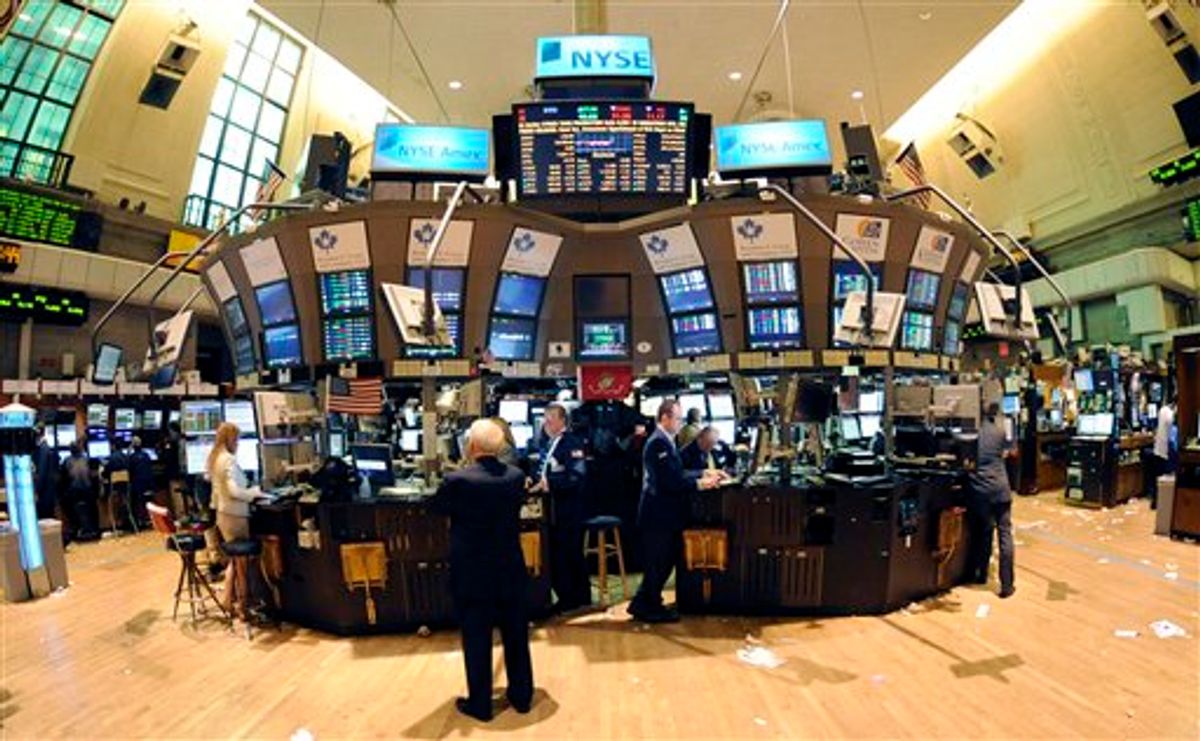 In this photo taken Sept. 21, 2010, trading continues on the floor of the New York Stock Exchange in New York. Stock futures edged lower Wednesday, Sept. 22, as traders turned to buying Treasury's and gold after the Federal Reserve failed to take any immediate steps to help the economy.(AP Photo/Henny Ray Abrams) (AP)
--

Conservatives have long succeeded in persuading business that they are its friends and liberals are its enemies. In reality, the reverse is true. Liberalism saved American capitalism during the depression, and if American capitalism is to be saved from the Great Recession, liberals will have to rescue it.

Modern conservatives claim to be pro-business. But economic conservatism is not based on any empirical study of the actual economic requirements of successful modern industrial and service corporations in a modern mixed economy. The economic right combines an anachronistic tradition with a crackpot ideology.

The anachronistic tradition is Jeffersonian small-producer populism. Defending the rights of small farmers and small businesses was progressive in the 18th and early 19th centuries, when the enemies of freedom were aristocratic landlords who owned slaves and serfs and monopolies with royal charters. Although the industrial revolution rendered small-government Jeffersonianism obsolete by the mid-19th century, American conservatives continue successfully to appeal to Jeffersonian sentiments a century and a half later.

Neither Jeffersonian populists nor libertarian ideologues have the slightest clue about how to run a complex technological society in the 21st century. Why should they? Jeffersonianism is a program for a primitive society of small farmers of a kind that no longer exists anywhere. At least, once upon a time, there were genuine Jeffersonian agrarian societies in the real world. There has never been a libertarian country and there never will be, because the maximum of government authority allowed by libertarian theory is well below the minimum required by a functioning community.

The true friends of business in America and the world have long been liberals, not conservatives. The propaganda of the right to the contrary, liberal thinkers like John Maynard Keynes and liberal politicians like Franklin Delano Roosevelt have never been socialists or collectivists. With the kindred classical liberals of the 19th century they have shared a commitment to individual rights, private property and limited government. However, they have believed that it was necessary to sacrifice some aspects of classical liberalism, in order to save as much as possible of the rest. Liberals have believed that limited doses of socialism would inoculate liberal society against totalitarian socialism as well as fascism and other illiberal systems. Indeed, Marxist radicals have often denounced American liberals and European social democrats for seeking to rescue and reform market society rather than replace it.

Unlike many radicals and populists on the left, liberals in the New Deal tradition do not believe that business elites are wicked or stupid as individuals. The problem is at the level of collective action. Even if all business owners and executives were completely virtuous and rational, in certain circumstances the pursuit by businesses of their legitimate short-term interests could produce disaster for the market economy as a whole. What is good for particular businesses may not be good for Business with a capital B.

The "paradox of thrift" that Keynes identified is one example. Today’s Great Recession has been prolonged because consumers and businesses are saving rather than spending -- a strategy that, while defensible in each particular case, results in economic stagnation when everyone saves and nobody spends.

But there are many other situations in which what is rational for an individual business is destructive to the market economy as a whole. Every business may want to pay workers the lowest possible wages. But workers are also consumers. What is more, the non-rich spend more of their income than the rich (in Keynesian terms, they have a higher “propensity to consume.”) This means that driving down the wages of workers, however it may benefit particular employers in particular industries in the short term, ultimately starves the economy of demand in the long run.

Even worse, if an increasing share of profits goes to a rich minority, the result is also likely to be a series of asset bubbles. The reason is that the super-rich, who already have enough possessions and savings, tend to use extra money to speculate on volatile assets: tech stocks, oil, gold, real estate, Picasso paintings. A highly unequal, low-wage, low-consumption economy that is repeatedly shattered by the popping of speculative asset bubbles cannot be good for business as a whole.

Then there is the welfare state. Business elites tend to applaud conservatives who denounce entitlements. But this only proves that they have not thought the issue through. Social Security, Medicare and unemployment benefits are "automatic stabilizers" that tend to keep consumption up during recessions. In countries without adequate social insurance, like the U.S. before the 1930s and China today, individuals tend to hoard much more of their income to prepare for retirement and medical emergencies. Like lowering wages, abolishing or means-testing entitlements would lower mass consumption, to the detriment of business as a whole.

Liberal policies that ensure adequate wages and economic security for the low- and middle-income Americans thus increase the demand for goods and services. This may not matter to multinationals that focus on selling in other markets, but it is critical to domestic and foreign businesses with American customers. Note that the policies with the potential to help business as a whole the most are the very New Deal liberal policies that nowadays are falsely stigmatized as far left -- a living wage and generous, universal social insurance.

Unlike New Deal liberalism, the neoliberal economic philosophy of centrist Democrats like Barack Obama is arguably bad for business because it is too conservative. In the 1980s and 1990s, neoliberals like Bill Clinton, Robert Rubin and Larry Summers distanced themselves from New Deal liberalism and sought to ingratiate themselves with business and finance. In doing so, they adopted much of the conservative critique of the center-left that many members of the business community find persuasive. The neoliberals were like doctors who seek to ingratiate themselves with patients by agreeing with the patients' own crackpot self-diagnoses and encouraging the patients' belief in miracle cures, instead of sternly telling the truth and prescribing the medicine that the patients require.

Business complained that there was too much regulation -- and the neoliberals agreed, collaborating with conservatives to deregulate utility industries like electricity and finance. The deregulation of electrical utilities permitted Ken Lay and his Enron cronies to wreck the California economy with their criminal schemes, at untold cost to West Coast and national businesses. And deregulation of finance helped to cause the Great Recession, with its devastating effects on business in the U.S. and abroad.

In light of these consequences of deregulation -- first rolling blackouts, then a near-depression -- you would think that rational businesspeople would be demanding more regulation of electricity, finance and other utility industries on which business relies, at the same time that they oppose unnecessary or poorly designed regulations. Instead, the crude message from the business press and business organizations is that there should be less regulation, period.

Then there is the problem of excessive American healthcare costs, which are chiefly the product of price gouging by the private medical and insurance industries. The victims of predatory medical monopolies and oligopolies in the U.S. include American businesses in the non-medical sector as well as individual citizens. You would think that there would be a parade of CEOs on Capitol Hill every week, demanding that Congress investigate why American doctors are paid twice as much on average as doctors in other countries and why pharmaceutical companies charge far more for drugs in the U.S. than elsewhere. You would think that America's non-medical industries would object to being shaken down by the medical-industrial complex.

But no. Let the American Medical Association, the insurance lobby and other representatives of America's bloated medical industries fend off reform by raising the specter of "socialism" and all at once the gouging of American business by American medicine is forgiven. It is as though a shopkeeper shaken down by a gangster were persuaded by the gangster's argument: "We private sector businessmen must stick together against those meddling cops."

If capitalism ever comes to an end in the U.S., it will not be extinguished by the center-left, or for that matter by the radical left. It will be suffocated by demagogic tribunes of the people who will preserve the incomes and economic security of the majority by forms of economic regimentation that, unlike liberal policies, are not compatible with a market economy and a high degree of freedom for private enterprise, and which might well kill off long-term economic growth. Should that day ever come, American business will learn too late that the real choice all along was not between Ronald Reagan and Franklin Roosevelt, but between Franklin Roosevelt and Huey Long.