A 23-year-old visitor to the accused WikiLeaks leaker is detained at the border, his laptop searched and seized 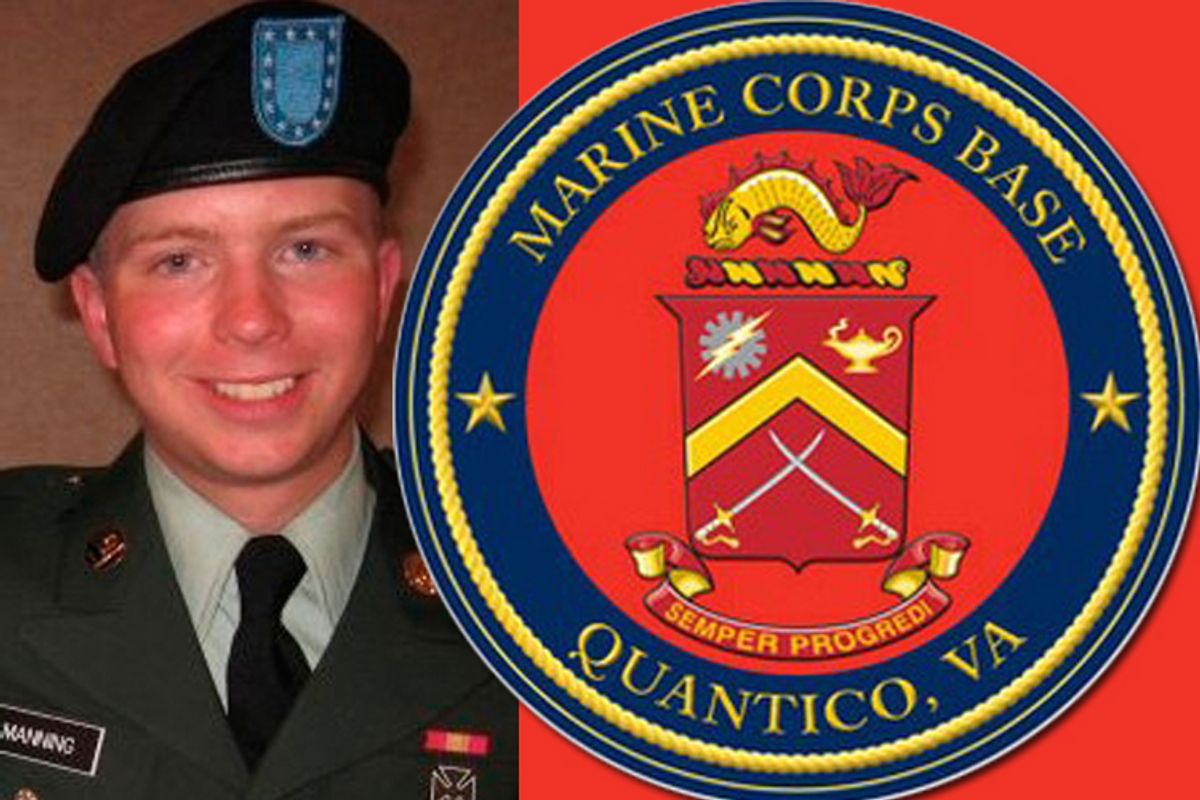 In July of this year, U.S. citizen Jacob Appelbaum, a researcher and spokesman for WikiLeaks, was detained for several hours at the Newark airport after returning from a trip to Holland, and had his laptop, cellphones and other electronic products seized -- all without a search warrant, without being charged with a crime, and without even being under investigation, at least to his knowledge.  He was interrogated at length about WikiLeaks, and was told by the detaining agents that he could expect to be subjected to the same treatment every time he left the country and attempted to return to the U.S.  Days later, two FBI agents approached him at a computer conference he was attending in New York and asked to speak with him again.  To date, he has never been charged with any crime or even told he's under investigation for anything; this was clearly a thuggish attempt by federal officials to intimidate any American citizen involved with or supporting WikiLeaks.

That campaign of intimidation is now clearly spreading to supporters of Bradley Manning.  Last Wednesday, November 3, David House, a 23-year-old researcher who works at MIT, was returning to the U.S. from a short vacation with his girlfriend in Mexico, and was subjected to similar and even worse treatment.  House's crime:  he did work in helping set up the Bradley Manning Support Network, an organization created to raise money for Manning's legal defense fund, and he has now visited Manning three times in Quantico, Virginia, where the accused WikiLeaks leaker is currently being detained (all those visits are fully monitored by government agents).  Like Appelbaum, House has never been accused of any crime, never been advised that he's under investigation, and was never told by any federal agents that he's suspected of any wrongdoing at all.

Last Wednesday, House arrived at Chicago's O'Hare Airport, and his flight was met in the concourse by customs agents, who examined the passports of all deplaning passengers until they saw House's, at which point they stopped.  He was then directed to Customs, where his and his girlfriend's bags were extensively searched.  After the search was complete, two men identifying themselves as Homeland Security officials told House and his girlfriend they were being detained for questioning and would miss their connecting flight.  House was told that he was required to relinquish all of his electronic products, and thus gave them his laptop, cellphone, digital camera and UBS flash drive.  The document he received itemizing his seized property is here.  He was also told to give the agents all of his passwords and encryption keys, which he refused to do.

House was then taken to a detention room by two armed agents and on his way there, he passed by a room in which several individuals were plugging various instruments into his laptop and cellphone.  The two agents, Marcial Santiago and Darin Louck, proceeded to question him for 90 minutes about why he was visiting Manning in prison, what work he did to support the Manning campaign, who else was involved in the Manning support group, and what his views were on WikiLeaks.  He was told that he would not receive his laptop or camera back, and the agents kept it.  To date, he has not received them back and very well may never.  When he told them that he had roughly 20 hours of source code work in his laptop and would like to save it or email it to a saved site, they told him he could not do that.  He subsequently learned from Agent Santiago that although Agent Louck identified himself as a Homeland Security agent, he is, in fact, with the FBI Joint Terrorism Task Force.

What's going on is here obvious.  The Federal Government has the authority to conduct border searches of people entering the country that are far broader than for those inside the country, and such searches require no search warrant.  The Government has that power in order to prevent security threats from entering the country, but here, they are clearly exploiting and abusing it in order to conduct investigative searches which would ordinarily require a search warrant but for which they have no basis to obtain one (in his effort to justify what he did in turning in Manning, Adrian Lamo -- the least credible person on the planet -- has been attempting to convince federal authorities that WikiLeaks is not merely a publisher of classified information, but an "espionage" ring that affirmatively induces leaks, thus enabling its prosecution; to achieve that, he has repeatedly claimed, without a shred of evidence, that MIT students actively assisted Manning in obtaining and leaking the information; in any event, House is not and never was an MIT student).  American citizens who are charged with no crime and not under investigation should not have their laptops permanently seized and searched by law enforcement officials in the absence of reasonable suspicion that they did something wrong.

The real purpose of this conduct is to intimidate and deter anyone from being involved in any way with WikiLeaks and Bradley Manning.  And it works.  I had been invited to go and speak with Manning at Quantico, and still fully intend to do that -- I think Manning, if he did what he's accused of, is the most heroic political figure of the last decade at least -- but of course incidents like these, as intended, implant in your brain the fear that if you do go visit Manning -- or if you donate money to his legal defense fund, donate to WikiLeaks, or otherwise support them in any manner whatsoever -- then you, too, will be put on some list and have your property seized and searched with no search warrant when entering the country, and otherwise harassed and intimidated by the Executive Branch's police agencies.  It's bad enough that the Obama administration has escalated attacks on whistle-blowers through vastly increased prosecutions, but this level of intimidation is clearly targeting legitimate political activity.  It now goes far beyond prosecuting whistle-blowers and is intended to harass and deter those who are merely supportive of them.

UPDATE:  I just want to underscore how abusive this all is.  Totally independent of the intimidation aspects -- which are the worst part of this -- just consider what an absolute mockery this makes of the Constitution.  If House (or Appelbaum) had been inside the U.S., the Government would have never have been able to search or seize their laptops because the Fourth Amendment prohibits that behavior without a search warrant, which they obviously can't obtain.  So instead, the Government just waits for them to leave the country -- which many many people do these days -- and then seizes their belongings and searches all of their communications upon their return, without a shred of judicial review or any basis to establish wrongdoing.  What conceivable purpose is there in having a Fourth Amendment if it can be so easily circumvented this way through the blatant abuse of border searching powers?

UPDATE II:  The aforementioned Appelbaum wrote to me tonight:  "I still have not had my equipment returned [after four months]. I will no longer travel internationally with anything except clothes in my carry on."  Land of the Free.