Harrison Ford and Diane Keaton are grouchy and great in "Morning Glory," but the Canadian actress steals the show 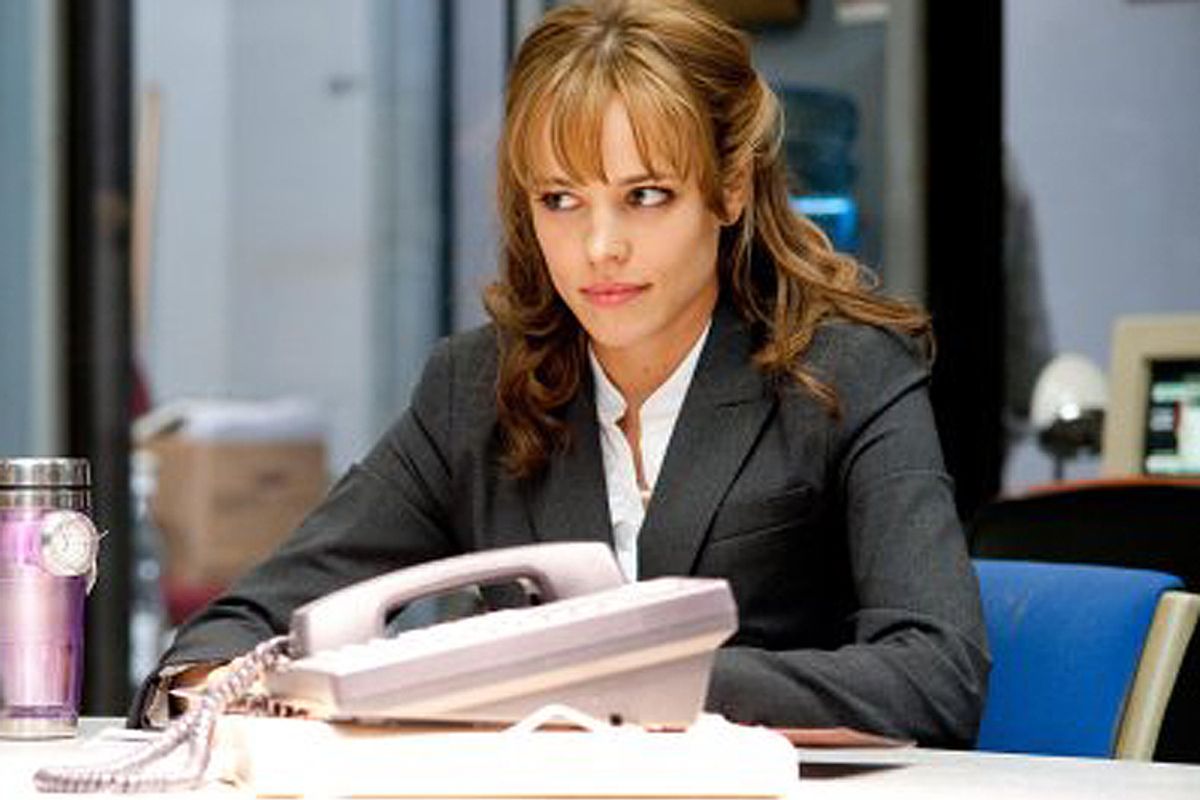 The young woman comes springing up the hill, knees and elbows working, looking for all the world like a juvenile doe, headed straight at the motionless, broad-shouldered man with a shotgun. Except that the metaphorical significance of the moment has been reversed: Becky Fuller (Rachel McAdams) is the hunter, and Mike Pomeroy (Harrison Ford) is the game. Becky produces "Daybreak," the failing morning show on a fictitious network called IBS, and her last shot to save the show may be to lure or drag this embittered veteran newsman out of his enforced retirement.

Am I reading way too much symbolism and subtext into a brightly colored Hollywood comedy that rips off the "Mary Tyler Moore" Manhattan TV-girl story for about the 46th time? Maybe, kind of -- but not really. "Morning Glory" is worth your attention amid the overcrowded fall movie calendar precisely because it was directed with love and imagination by Roger Michell, a talented British filmmaker who's been kicking around the margins of the industry since he clicked with "Notting Hill" 11 years ago. This is a brash, lightweight backstage comedy that looks lovely, doesn't insult its audience and uses its stars, both young and old, to terrific effect.

Despite the presence of both Ford and Diane Keaton, who are highly enjoyable as the dueling co-hosts who represent Becky's hail-Mary attempt to save "Daybreak," the movie belongs to McAdams. She's gotten to stardom a bit late, given the pitiless march of time for women in Hollywood (McAdams turns 32 this month), but after "Sherlock Holmes" and "The Time Traveler's Wife," this skillful Canadian comedienne seems determined to make the most of it. I use that old-fashioned noun for a reason, since McAdams has clearly gone to school on some of the great comic actresses of film and TV history. It's invidious to compare young women to Audrey Hepburn, but McAdams has a dash of Audreyness, to go along with doses of Lucille Ball, Doris Day and, let us note, one of the greatest of all graceful WASP klutzes in movie history, who happens to be her co-star herein.

It takes impressive command of voice, body and demeanor to play a character who's as awkward and tightly wound as Becky Fuller, and more still to make her seem appealing rather than scary or desperate. OK, she is a little desperate; after Becky gets cashiered at a second-rate local morning show in New Jersey, her mom (Patti D'Arbanville, very good in a teensy role) gently tells her that her long-standing dream to work at the "Today" show is on the rocks. When she finally gets an interview with a New York studio exec (the ever-wonderful Jeff Goldblum, who as usual nails every line without appearing to care), she pitches him with so much up-with-people, believe-in-me, spring-loaded force she virtually topples from her chair. "Are you going to sing now?" Goldblum asks.

Indeed, McAdams is so much fun to watch it almost wouldn't matter what happens in the movie, but Michell and screenwriter Aline Brosh McKenna ("The Devil Wears Prada") keep the pretty pictures, the R-rated dialogue and the backstage histrionics coming fast and furious. Of course there's a love interest, genially portrayed by Patrick Wilson, but he's the virtual definition of eye candy. His chest may be impressively developed, but his character is not. Wilson's character looks on adoringly as Becky drops things, barks orders and tries to negotiate between battle-scarred co-host Colleen Peck (Keaton) -- who's been interviewing celebrity chefs and doing gunky papier-mâché projects on the air for 20 years -- and above-it-all Mike, whose contract stipulates a tropical fruit plate, a table of mixers and the right to refuse any story.

It's certainly to Michell and McKenna's credit that they try to tackle the dilemmas of 21st-century television journalism in the middle of a girl-conquers-world comedy. If they can't quite solve anything, that's probably not their fault. "News is a sacred endeavor," Mike bellows at Becky during their first conversation. "It's people like you who are ruining it." Of course Becky doesn't want to ruin anything; she's an idealistic media believer who just wants to sex up the news a little and make it YouTube-friendly. Perhaps this is a sunnier portrayal of the morning-news universe than the evidence warrants, and the question of whether any real morning producer would even want a dinosaur like Mike Pomeroy (who drinks late into the night at 21, alongside Bob Schieffer and Morley Safer) is open to debate.

If you're waiting for me to decode the buried Nazi subtext of "Morning Glory," here's the best I can do: This movie is almost entirely fun, and the gorgeous, high-energy compositions of cinematographer Alwin Küchler are way above the Hollywood norm. McAdams is sensational, and this role should dispel any lingering doubt about her ability to carry a movie as the comic-romantic lead. I guess I wonder whether her performance as an irrepressible dynamo, who never sleeps and always looks terrific, who gets out of bed after sex with her boyfriend to watch late-night news and prepare for her early-morning meeting, is one of those characters destined to send female viewers into a downward spiral of comparison.

Sure, Mike cautions Becky late in the film that she's got to make time for love and family and not make the mistakes he did, blah blah blah. Easier said than done, dude. But the Becky we see here is never going to do that. Her prodigious energy is funny and appealing and also completely impossible to sustain, and she's headed straight for that mid-30s female fork in the road, where she keeps her career afloat on a rising tide of caffeine and pharmaceuticals and is made to feel guilty if she decides to have kids and guilty if she doesn't. OK, now I've taken a well-crafted and entertaining mainstream film -- always something to be grateful for -- and turned it into a misogynist downer. You're welcome! Give me an "original story by" credit if you go this route on the sequel, guys. I promise I won't sue.