The one thing W and Democrats can now agree on

All these years later, the left is finding out why John McCain irked George W. Bush so much 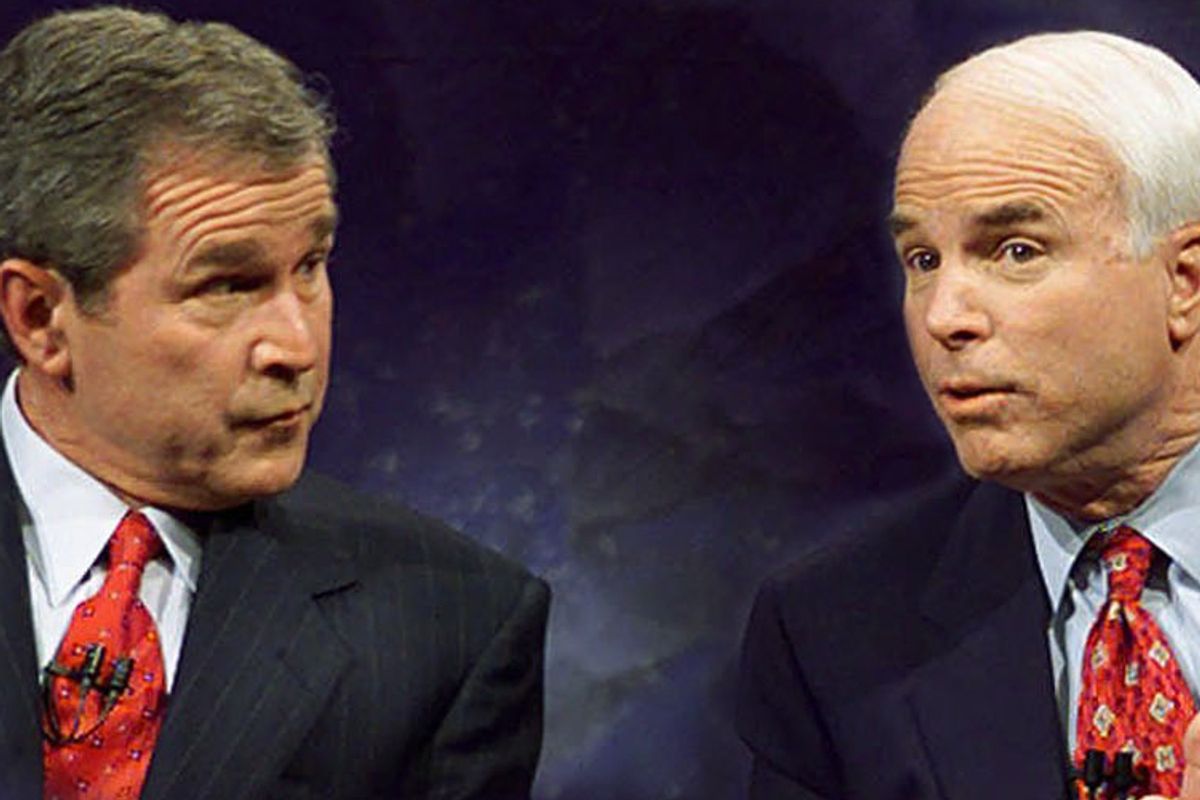 George W. Bush and John McCain at a debate during their bitter campaign for the 2000 Republican presidential nomination
--

George W. Bush is back in the news -- and so is his acrimonious relationship with John McCain.

In his new memoir, the former president criticizes McCain's handling of the September 2008 financial meltdown, suggesting that the then-GOP presidential nominee -- who famously "suspended" his campaign and demanded a White House summit with Bush and Barack Obama -- did not conduct himself in a "statesmanlike" way. Bush also questions McCain's refusal to ask him to hit the campaign trail on his behalf; recall that the McCain campaign kept Bush 1,000 miles away from the '08 GOP convention in St. Paul, limiting him to a brief videotaped appearance.

And now, the Financial Times' Alex Barker is offering details of a supposed Oval Office encounter between Bush and a group of British dignitaries, including then-Prime Minister Gordon Brown, "at the height of the 2008 presidential campaign":

Naturally the election came up in conversation. Trying to be even-handed and polite, the Brits said something diplomatic about McCain’s campaign, expecting Bush to express some warm words of support for the Republican candidate.

Not a chance. "I probably won’t even vote for the guy," Bush told the group, according to two people present. "I had to endorse him. But I’d have endorsed Obama if they’d asked me."

It's possible that this was just an awkward and failed attempt at humor -- sort of like when Bush tried to make light of David Letterman's heart surgery back in 2000. Maybe it was a reference to the old line, attributed to various politicians, that "I'll endorse you or your opponent -- whichever will do you more good."  Whatever his intent, it seems clear that McCain still very much irks Bush. After all, Bush took pains in his memoir not to criticize Barack Obama, but he couldn't resist taking a few swipes at his old GOP foe.

Oddly enough, this means that there's now some common ground between Bush and many Democrats, who have come to view McCain as a spiteful, unprincipled and bitter old man. It's a development that would have been unfathomable 10 years ago, at the height of the Bush-McCain war, when McCain emerged as every Democrat's favorite Republican.

The animosity between the two men, of course, took root during the February 2000 GOP primary campaign in South Carolina. Just weeks earlier, on the eve of the New Hampshire primary, Bush and McCain had actually shared a warm, friendly conversation, complimenting each other on the positive nature of their campaigns.

"We've run a campaign that you and I and our families can be proud of," McCain told Bush.

But when the New Hampshire results were reported, everything changed. With his stunning 20-point win, McCain instantly became a live threat to win the nomination -- and an overnight national celebrity. Bush, meanwhile, whose massive cash advantage and endless pile of endorsements from elected and party officials had vested his campaign with an overwhelming sense of inevitability, was suddenly in real and grave danger of melting down and falling out of the race.

South Carolina, the next test, would be critical. And with so much on the line, Bush changed tactics. Positive campaigns are all well and good when you know you're going to win. But when losing is a real possibility? Thus, Bush appeared with the leader of a veterans organization, who claimed that McCain came home from Vietnam and "forgot us." Bush, the old Texas Air National Guardsman, just stood there. McCain fired back with an ad that accused Bush of reneging on his positive campaign pledge, accusing him of "twisting the truth like Clinton" -- a charge that Bush bristled at, claiming it was the worst thing a Republican could say about a fellow Republican. Charges and counter-charges ensued, as did an ugly underground campaign that attacked McCain personally (and, in many cases, groundlessly). Before their final debate, Bush approached McCain backstage and offered his hand; McCain refused it.

At the time, this all made McCain a hero to Democrats and independent voters, who saw the Arizonan as a fearless maverick standing up to the powerful Republican Party establishment and its empty suit frontman. Bush won South Carolina, but in the next contest -- Michigan -- McCain pulled out a victory. Exit polls, though, showed that his win was the result of votes from Democrats and independents; among registered Republicans, Bush had come in first -- easily. In GOP activist circles, a new talking point was born: McCain was a vehicle for "mischievous" Democrats who were looking to nominate the weaker candidate in order to help Al Gore win in the fall. (Never mind that one national poll found McCain running a staggering 21 points better than Bush in a head-to-head with Gore.) Bush's standing with Republicans only improved and he blitzed McCain in the next wave of primaries and coasted to the nomination.

To Bush, whose family is no stranger to ugly political wins (ask Bob Dole about New Hampshire in 1988), this is where it was supposed to end. McCain, in defeat, would shake his hand, say some nice words and crack a few jokes, then join the Bush team going forward. But McCain wasn't willing to let it go, and set out to make Bush's political life -- both as a candidate in the fall of 2000 and then as president -- a living hell. Thus it was that McCain in early 2001 actually voted against Bush's tax cuts -- the same tax cuts that McCain now insists should be extended -- bucked the president on healthcare, the environment and gun control and encouraged talk that he might run for president again in 2004, maybe as a Republican or maybe as an independent. He also, some Democrats still swear, explored the idea of switching parties -- an idea he kept alive all the way through the spring of 2004, when John Kerry wanted to put him on that year's Democratic ticket.

McCain only embraced Bush -- literally -- in the summer of 2004, when he calculated that he'd get one more shot at the White House in 2008 if he stayed in the GOP. At that point, it became imperative for McCain to throw himself into Bush's reelection campaign. Only then did he become a loyal Bush soldier -- a decision that marked the beginning of the left's disaffection with McCain, which has only intensified in the Obama era (with McCain now tormenting Obama the way he once tormented Bush).

Bush's low opinion of him used to make McCain attractive to Democrats. Now, though, they'd probably admit that it's one of the few judgment calls that Bush actually got right.