The problem with "It's the economy, stupid"

If the economy is all that matters to voters, what incentive is there for leaders to tackle anything else? 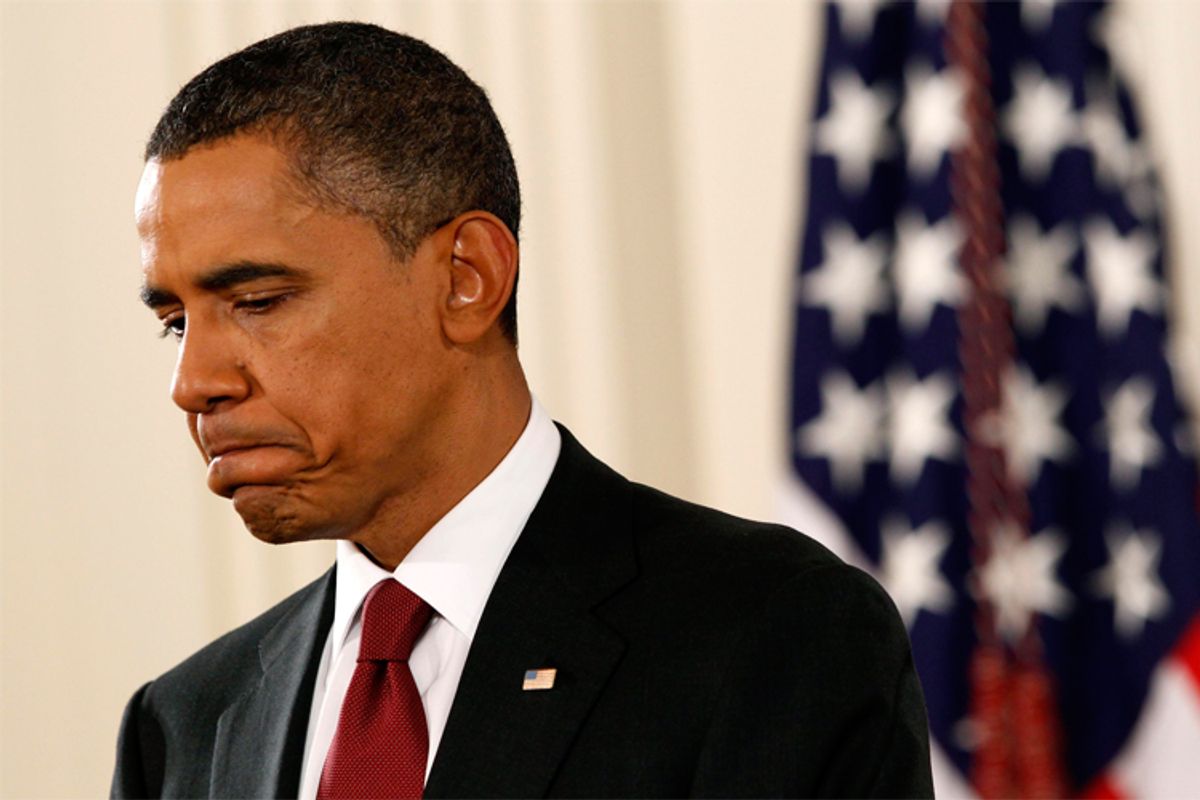 To explain the "shellacking" Democrats suffered last week, liberals are mostly sticking to that familiar old mantra: It’s the economy, stupid. They're not wrong. The state of the economy is the single most powerful predictor of American political results, whether we admit it or even know it.

So with unemployment hovering around 10 percent, it was a safe bet that Democrats would be losing the House. Paeans to Obama's soaring oratory were cast aside in favor of a more hard-nosed view of his ascent as the product of a deeply unpopular Republican president and an already-faltering economy. Indeed, charisma has been thoroughly discredited as a factor in elections: For all of Reagan's legendary communication skills, Republicans lost 26 House seats in 1982, and for all of Clinton's storied charm, his party lost the House in a spectacular landslide in 1994.

So why is it that political commentators -- Frank Rich being only the latest example -- continue to look to things like "messaging" and "optics" to explain election results? The reluctance to engage with structural forces is probably due at least in part to the fact that writing about elitism and arrogance is more entertaining than writing about unemployment every week -- the phenomenon that led Freakonomist Justin Wolfers to archly describe his forecast as "more about the marketplace for punditry than it is about this election." Even more frightening than an approaching column deadline or low page-view count, though, is confronting the existential crisis posed by structural forces -- what's the point of all the campaigning if we've basically known what would happen for months?

OK, that's a little melodramatic. It's not that economic forces are the only ones that matter. The underlying makeup of districts is really important -- unsurprisingly, Democrats in mixed or "swing" districts were much more likely to be ousted than those in solidly Democratic ones. And lots of little things have some impact. For example, a cursory analysis indicates that supporting bills with controversial roll call votes may have hurt Democrats in tight races. Still, structural forces, particularly economic ones, dominate. Based solely on fundamental indicators, political scientists were predicting a Democratic loss back in September 2009, over a year before the actual elections.

You don't have to be a pure economic determinist to be discomforted by the realization that the space for voters to voice their policy preferences is so small. Perhaps we should find reassurance in knowing people are voting on some aspect of their elected officials' performance, however limited in scope, rather than the fate of the Burlington Coat Factory Mosque or how good said official looks in a Cosmo spread. But it's nonetheless worrisome to anyone who cares about "the issues" (quaint, I know) to think that politics is essentially reducible to economics. If politicians know they'll be judged on economic indicators more than any other policy initiatives, why should they care about anything else?

It's an important question. The American economy is likely to remain volatile for some time as we struggle to adapt to new realities and shift to a post-industrial paradigm, all within a globalized system over which we have less control than ever. And with deep, pervasive challenges still ahead of us, ranging from still-rising inequality to outdated, unsustainable infrastructure, we can't afford a loss of ambition in our public servants. As the economy recovers in fits and starts, will American politics become a rotating door for representatives thrown out of office after a couple of years for failing to fix systemic problems quickly enough? And if it does, will any legislators dare to tackle the likes of immigration or climate change?

There may yet be reason to hope. Political scientist Jonathan Bernstein has argued that since the outcomes of general elections are largely predetermined by structural forces, primaries are actually more important in developing policy agendas and ideological positions. It's in primaries that parties hash out priorities and push new ideas. Thus, it is responsiveness to primary voters -- the party's base -- that drives politicians to pay attention to non-economic issues.

Primaries are also important as tools for candidate selection. As the midterms demonstrated, candidate quality -- or lack thereof -- can outweigh structural forces in even the most dire situations. Take Nevada: Despite poor approval ratings and the highest unemployment rate in the nation, Harry Reid managed to hang on to his seat because Sharron Angle was too outrageous even for voters desperate for change. Had state Republicans selected almost any other candidate in the Nevada primary, Reid would have been finished.

Even if the overall outcome is driven by structural forces, the details at the margins matter, particularly in the Senate: As the Scott Brown saga demonstrated, a single senator here or there can make or break legislative achievements. And there are always surprises. Even the seemingly omniscient Nate Silver stressed that although the overall outcome of this election was never in doubt, the depth and breadth of the projected Republican victory remained uncertain until after the polls closed.

Finally, while elections are important, they're certainly not the only means for expressing political views and driving policy. Regardless of election results, the usual stream of special interests, from nonprofits to corporate lobbyists, will seek to exert influence over specific policies.

Still, it's inescapable that the American voting public isn't quite as independent-minded as we like to think we are. We don't reason through candidates' policy prescriptions and messages so much as reduce them; we are not fickle in our core views so much as petulant when politicians fail to boost employment quickly enough. But that's not fair, either -- it's hard to blame the American electorate for prioritizing jobs when without them we have nothing but a 99-week countdown until unemployment benefits run out. For all the right's fretting about socialism, the impact of the economy on elections is a clear sign of the extent to which we're all still in thrall to the market.