Imagine the flavor of prosciutto but in silky fat form. It's the soul of bucatini all'amatriciana, Rome's favorite 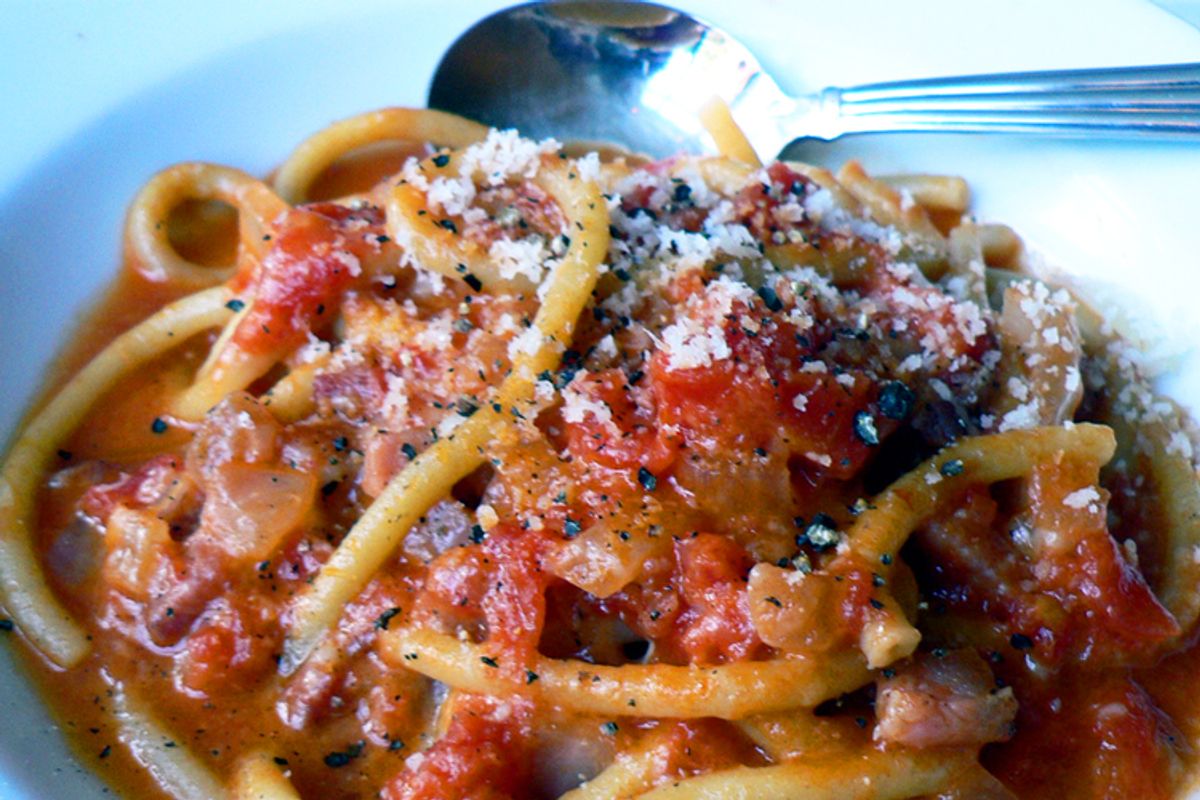 A recent year in Italy taught me that the pig is the king of its gastronomic jungle. Italians heart hogs. They prepare every imaginable part in every imaginable manner: cured and roasted and braised, even slow-poached in olive oil. One terrifying morning, in the back of a butcher shop, I ate it raw, slathered on a slice of rustic bread. Surviving the sushi-sausage experience would have been the most memorable encounter with the noble swine had it not been for an introduction to guanciale. At a sleepy trattoria, somewhere in the middle of Italy, I had a plate of pasta steeped in such succulence that I had to ask the owner the secret. "Semplice," he said, pinching my face, "guancia."

"Guancia" in Italian means pillow, which is synonymous with cheek. And it's the facial aspect of the word, and the animal, that found its way into the kitchens of central Italy. Apparently pancetta, the familiar smoked and cured pork belly, simply wasn't bold enough for rendering purposes, so they went to the face and found a far more profound flavor. To produce guanciale, the jowls of a hog are short-cured (three to four weeks) in salt and sugar and spices. The abbreviated process works well with the jowls' combination of streaked meat and thick fat. And it's that fat/meat quotient (as opposed to pancetta, which is meatier) that makes guanciale such a solid base. The fat melts in a hot pan, leaving the tender meat and a silky lipid of smoke and salt that informs but doesn't overwhelm any soup or sauce.

Guanciale is best as the base of a pasta dish. And the most famous pasta using guanciale is the central Italian wonder known as amatriciana. Not surprisingly, there's some controversy among the Italians as to the origins of amatriciana. Towns from regions of Abruzzo, Umbria and Lazio claim the superior preparation with appropriate noodle, but (with all due respect to the namesake Lazian town of Amatri) the king versions reign in the trattorias of Rome using the bucatini noodle -- a thick spaghetti with a little hole (or "buco") that runs through it. And, of course, within Rome, there are various versions, each the ultimo.

Regardless, a standard version begins with the guanciale, rendered slowly before taking in slow succession: thin red onions, a touch of red pepper flakes, plum tomatoes, torn basil leaves, and, for the finish, some grated pecorino with a swirl of olive oil and a confetti of basil. What you have is a broad balance of flavors with the guanciale holding it all together. Like most Italian dishes, this is simple to prepare. The challenge is coming up with the same quality of ingredients that are abundant in Italy.

For years, American cooks and chefs have used pancetta for dishes that traditionally call for guanciale, since it's easier to find. But true, imported guanciale can be found in some big town specialty shops and major markets. The local butcher is always the best place to inquire. Guanciale can also be mail ordered from importers and a few national producers.

There are a number of ways to use guanciale, but it seems appropriate to start with the classic