What's with all the naked pregnant ladies?

Model Miranda Kerr joins a long list of expectant moms, not all of them famous, who have eagerly taken it off 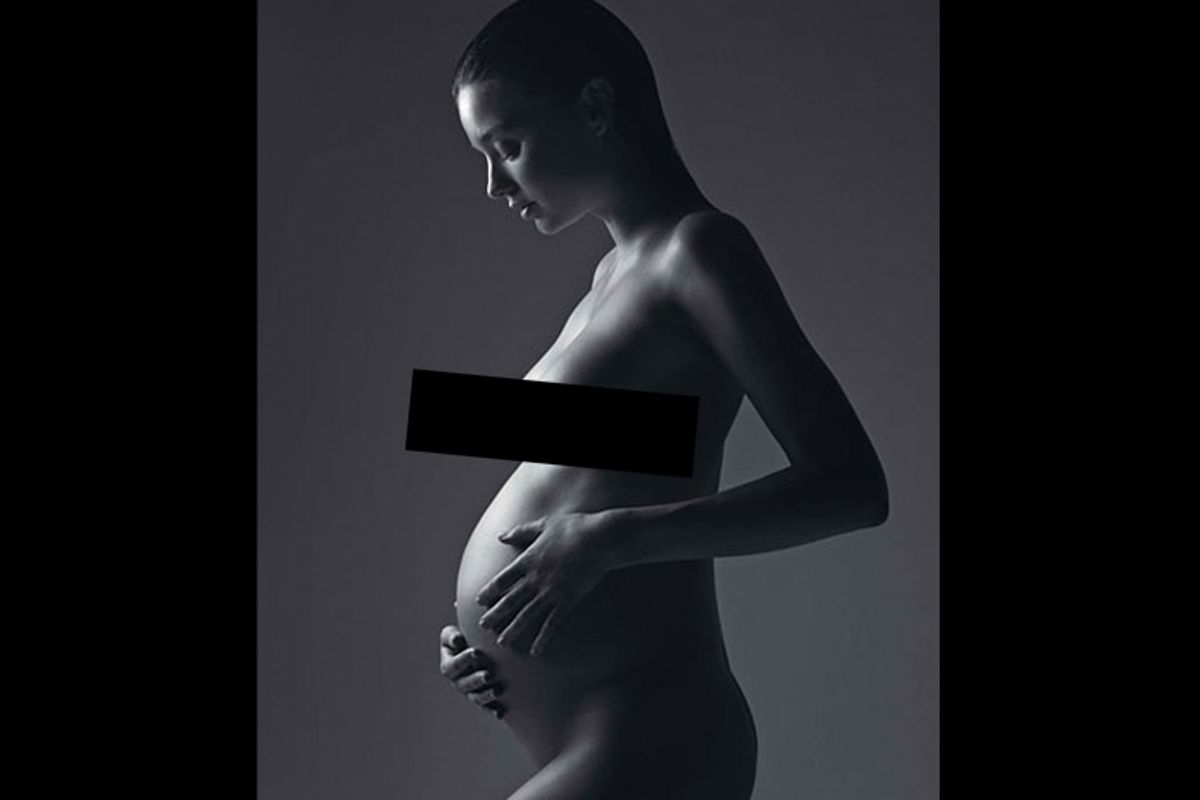 Another day, another famous woman posing naked while pregnant. This time it's Victoria's Secret model Miranda Kerr with her seven-month baby bump in the December issue of W magazine.

In a bold move, the 28-year-old has rejected the classic arm-over-swollen-boobs pose immortalized by Demi Moore on the cover of Vanity Fair. Instead, Kerr lovingly embraces her belly and makes no pretense of covering up. The black-and-white shot conveys all of the natural beauty and wonder of pregnancy ... by way of a superhumanly beautiful woman with nary a stretch mark. But regardless! It's an exquisite photo that reminds us that pregnancy is, um, one of the most awesome things ever? I mean, there is a baby growing inside her -- how amazing is that? Perhaps that kind of stupefied stoner-like talk is part of what is behind the trend of naked pregnant celebrities. We love to see stars humanized by the common experiences of we plebes; a bulging pregnant belly certainly does that and, at the same time, it taps into something seemingly transcendent and extraordinary. Or maybe we just like seeing naked female celebrities any way we can. It's probably a bit of both.

Naked pregnant chicks weren't always considered so acceptable, though. Back in 1991, Demi's Vanity Fair issue was sheathed in paper bags and banned from some newsstands. Since then, countless famous women have followed her lead: Cindy Crawford, Claudia Schiffer, Heidi Klum, Milla Jovovich, Britney Spears and Christina Aguilera, to name a few. Plenty more have shown off their swollen bellies without taking off their clothes -- take Brooke Shields in a wet, curve-hugging dress on the cover of Vogue's Shape issue, or a very pregnant Kourtney Kardashian walking red carpets in skin-tight mini-dresses. A New York Times piece on the trendiness (seriously) of  pregnancy in 2006 observed that it was "only a half dozen years ago that expectancy was viewed primarily as an awkward condition to be borne with what grace one could muster" and that "today women flaunt their pregnancies, take them public on Web sites and blogs and show them off with low-slung jeans, slinky tunics and dresses that mimic those on the runways."

Indeed, the "pregnancy porn," as Rebecca Traister once called it, isn't limited to celebrity glossies. There is a whole professional industry for maternity photo shoots, the results of which are displayed everywhere from living rooms to Facebook, and women even document their growing stomachs in mind-blowing time-lapse videos. Not everyone is happy about this development. In a recent episode of "Keeping Up With the Kardashians," Bruce Jenner was made a wee bit uncomfortable by a photo his wife hung up in the couple's bedroom of daughter Kourtney re-creating the famous Leibovitz image: "That's a nude shot of my daughter Kourtney," he said. "Why have that in here? Is it art?" The short answer: Yes. Some might see all this self-documentation as a sad symbol of narcissistic Web culture and celebrity mimicry. Indeed, so many meaningless aspects of our lives are obsessively photographed and broadcast online. But if ever there was something worth documenting and sharing with the world, this -- the complete and total transformation of a woman's body as she brings a mini person into the world -- would be it.