The secret to our happy marriage: Traveling alone

It may sound odd, but solo adventures give my wife and me our freedom -- and the gift of missing each other 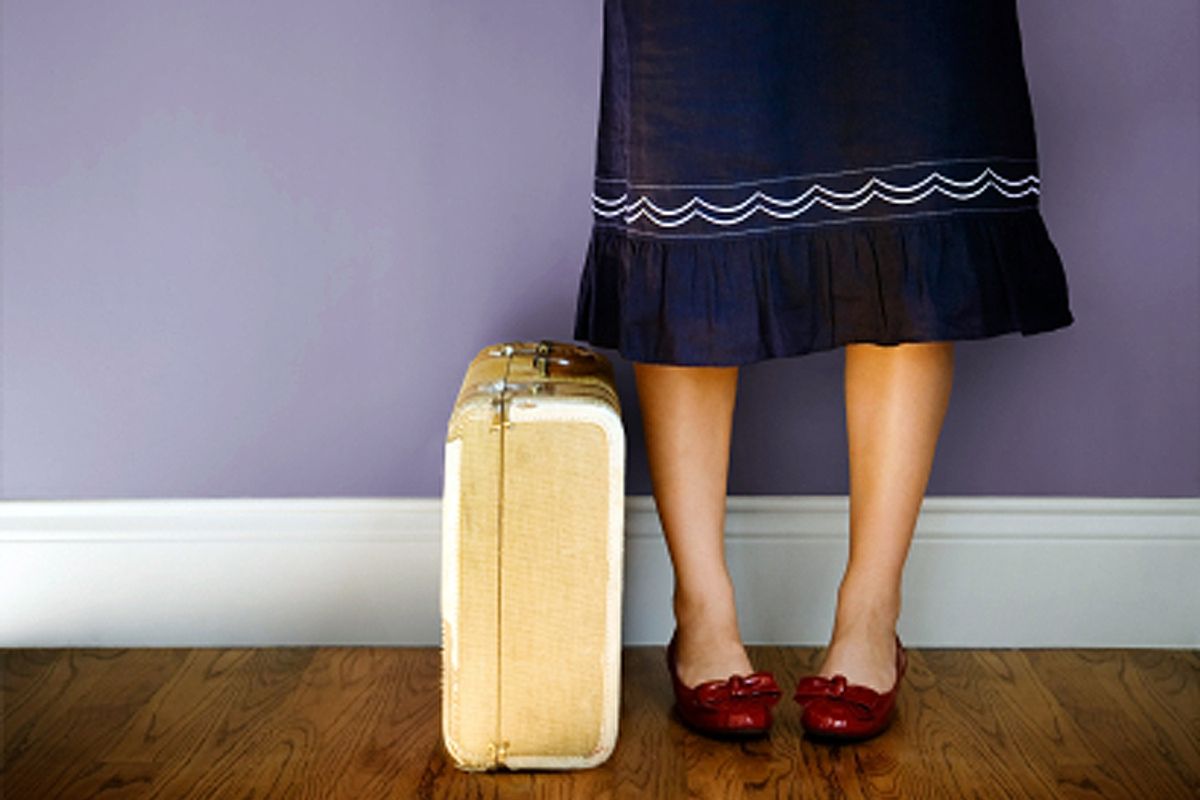 One afternoon in the summer of 2009, I came downstairs from my office. My wife, Regina, sat at her computer, gazing wistfully at crop-circle photos. In her leisure time, Regina consumes endless hours of home-renovation shows. She bakes brownies. When I first wrote this, she was making cute little witches out of clothespins for a crafting booth at our son's school's annual Halloween carnival fundraiser. She's a normal mom who also happens, very quietly, to be really into crop circles.

"They're so beautiful this year," she said. She sighed. "I wish I could be there."

This was the spousal equivalent of a Bat Signal, a distress call from a sinking midlife ship. Regina's 40th birthday loomed only three weeks away. We'd been trying to figure out what would be an appropriate celebration. A party didn't seem like a good idea. While I wasn't entirely happy about the fact, we'd pretty much turned the corner from the party period of our life toward the middle-years, middle-class, middlebrow New Age fruitcake period.

The very real possibility of a darkly unrecognized milestone loomed; our life had become a thick catalog of reluctantly managed expectations. But there are times to sit around and mope about your lousy cash flow and increased feelings of irrelevance, and then there are times to damn those things to hell. My wife needed to have an adventure for her 40th birthday, and I needed to make that happen, whether I went with her or not. Regina and I have friends who vacation in Europe with their children, who love showing off photos of their progeny discovering Morocco or Vietnam. That's not our world, not even close. Date nights almost never happen in our lives; it's been more than a year since we paid for a baby sitter, and I can only leave the kid at my sister's so often. But stagnation is marriage's greatest enemy, so sometimes Regina and I go on trips without each other.

I understand why some couples don't like the idea of traveling apart. There's the thought that you'll be missing out on all the fun, or that an attractive stranger might walk into the bar (which happens in Jennifer Aniston movies, but not so much in real life). Realistically, though, how are two middle-aged people with limited income and children to support supposed to have long-term romantic getaways? They're not. Allowing your partner to travel alone means acceptance of your modest circumstances. To follow dreams, sometimes you have to give up illusions.

To me, Regina's crop-circle travel desire seemed odd, but who was I -- someone who still vaguely imagined getting asked someday to be a celebrity judge at the Cannabis Cup in Amsterdam -- to say anything? I didn't want to change her or hold her back; I wanted her to be happy on her own terms. Adult responsibilities shouldn't force you to submerge some vital part of your identity. If you even think about suppressing those impulses in your partner, that's the beginning of the end for a happy marriage. Regina took her trip. She didn't call home very often. When she did, she sounded ecstatic, and, on more than one occasion, a little tipsy. Her compatriots on the tour took her to the pub for her birthday and bought her a cake. Then she came home 12 days later with a thousand photos, a few friends for life, and semi-conclusive proof that the truth was out there. It had been, she said, one of the most important and redemptive experiences of her life. "Thank you so much for doing this for me," she said. "My pleasure," I said, and I really meant it.

From all the middle-aged fruitcake yoga I'd been doing I'd somehow gleaned the sentiment that the sum total of happiness in your life can be measured by the amount of happiness you bring to others. By merely sending Regina on a trip, I'd made her life better, and that made me feel good. But just because I'd done something nice for my wife didn't mean I'd suddenly transformed into an exemplar of selflessness.

Regina grew up Southern Presbyterian, trained to suffer silently and never complain. I was brought up, on the other hand, to whine about every slight problem, real or perceived, as though it were an injustice of Jim Crow proportions. My 40th birthday came six months later, and I wanted my own adventure.

I like taking trips with my family, but that usually entails dealing with spills, fretting about bedtimes, and sitting numbly on park benches wondering where the time's all gone. These things comprise the matter of life, and shouldn't be traded, but they also don't afford the fresh experience of solo adventure. It stirs the imagination. For a few days, or weeks, you can revive your youthful illusions of wonder. You can eat what you like, go where you like, and use the toilet whenever you want without anyone screaming your name across the house.

For my 40th birthday I went to Boulder, Colo., for the entire month of June, to attend yoga school. Regina had given me the precious gift of time, and it didn't cost her anything because I raised all the money for the trip online. But my experience wasn't as drenched in transcendent fabulosity as my wife's had been.

Just before leaving, I shredded my left hamstring. My industrial-size bottle of Advil and I ended up renting the spare bedroom of a semi-reformed Deadhead's condo located next to a trailer park, which I limped through to yoga class every morning at 7:30. My month of freedom, which I'd imagined I'd spend cruising around on my bike stoned and strolling up mountain paths in a state of sainted bliss, was instead defined by cooking frozen salmon burgers in a pan, watching the basketball team I hate the most win another NBA title, and reading arcane and inscrutable documents of ancient Indian philosophy while squirming in pain on a used mattress in an unadorned room. It was an often sad and exhausting time. For the first time in many years, I felt lonely, and I missed the cozy confines of my domestic life.

I needed my family. That's a nice feeling to have, even if it's painful at the time. Solo traveling, it turns out, gives you a tangible and surprising gift: It creates actual longing. Less than half an hour after the program ended, I was waiting at the bus depot for a ride to the airport, and four hours after that, I was finally, gratefully home.

Of course, we don't always travel alone. The weekend before I'd left, Regina and I celebrated our 10th wedding anniversary. We'd been intending to revisit the four-star resort in the Smoky Mountains where we'd spent several lovely days of our honeymoon, but finances wouldn't permit that. So instead, I got us a midweek rate at a small hotel in Desert Hot Springs. We left the kid with a friend for a couple of nights and drove out. For 48 hours, we soaked and relaxed, and took a daylong hike in Joshua Tree National Park. We drank champagne and did anniversary things. Just like old times, we put on our boots, drove out to a honky-tonk, and ate mediocre barbecue. We had a really fun and memorable time. Best of all, we had it together.